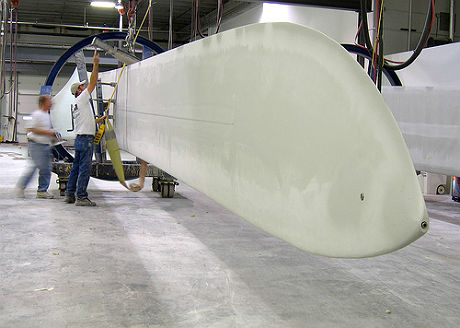 Workers assemble a wind turbine blade at a factory in Grand Forks, North Dakota, in 2006. (Photo by tuey via Creative Commons)

The Midwest has the potential for a thriving clean energy industry, but only if coherent policies are enacted at the state and federal level, clean-energy experts say.

Experts on the Midwestern clean-energy sector say the region stands to benefit because of its research universities, strong supply chains and a high level of manufacturing know-how.

But whether it does or not depends largely on policy-makers.

According to a report issued last week by Pew Charitable Trusts, hurdles to an expanded U.S. clean-energy sector include a lack of a national clean-energy standard and longstanding tax breaks for oil, gas and coal producers. Unless these and other issues are addressed, they could lead to billions of dollars of economic activity moving overseas, the analysis concluded.

“The Midwest looks to me like a great place for clean energy,” said Phyllis Cuttino, director of Pew’s Clean Energy Program. But, she added, clean-energy leaders in the Midwest and nationwide “all said the same thing: The thing that makes it really hard for us is that we can’t plan.”

These conclusions come from two lines of investigation Pew undertook to prepare the report. They commissioned a detailed analysis of clean-energy trends by Pike Research, industry analysts who specialize in global clean-technology markets. Pew also conducted five regional roundtables of clean-energy business leaders, including researchers, manufacturers, companies deploying solar and biomass, and investors, as well as one national roundtable, all to get the industry’s take on how current policy was affecting them, and which policy changes would help.

Pew found that the industry was at a tipping point in the United States and globally. Investment is on the rise, prices for clean energy are falling, and more and more clean energy is being deployed.

“Clean energy is here to stay. It’s not niche. It’s quickly becoming cost-competitive and going into the next phase,” Cuttino said.

Indeed, investment rose six-fold between 2004 and 2011 and was projected to continue to rise. Clean-energy installations—installations of solar photovoltaics, onshore and offshore wind, marine and hydrokinetic energy, geothermal, concentrating solar thermal, and biomass—will create $1.9 trillion in revenue globally and $269 billion in the United States between 2012 and 2018, the Pike Research analysis concluded.

“We’re at a moment that looks like the auto industry at the turn of the 20th century or the early days of computers,” Cuttino said. “A whole bunch of actors are rushing in; we have an oversupply of production capacity, and more investments are coming because of the perception it’s going to take off.”

As a result, the race is on between nations seeking to become global leaders in clean energy technology, the Pew analysis concluded. That race will not last forever, business leaders warn, and it’s not yet clear whether the United States in general, and the Midwest in particular, is going to win.

There are some encouraging signs for the industry, both in the Midwest and nationally, Pew found. The United States attracted a record $48.1 billion in private clean-energy investments in 2011, and the nation remains a leader in clean-energy innovation.

But the Pew report pointed to signs of trouble. While U.S. solar installations have doubled each year since 2009, both Germany and Italy installed more than three times as much new solar last year. And China installed three times more wind in 2011 than the United States.

“These trends are worrisome because these are technologies that we really invented and we used to manufacture and export,” Cuttino said. “Now we’re finding that we’re not playing at the same levels as other countries. Of the top 10 wind and solar companies in the world, we only have one of each,” she pointed out.

The reasons for this include fierce international competition, including tariffs, tight credit markets, and policies that favor established fossil-fuel-based power over clean energy in the United States.

What’s more, in other nations clean energy has not become the political football it has become here, said Aaron LeMieux, the founder and CEO of Tremont Electric, a six-year-old Cleveland-based company that specializes in harvesting kinetic energy.

“When we go to other countries like Japan, there’s a compelling understanding of what clean energy is and the need to have new [energy] technology alongside existing technology,” LeMieux said. In the United States, in contrast, “renewable energy technology tends to be a partisan argument between Democrats and Republicans.”

“At our business roundtables, they were kind of shocked that this had become a politicized issue,” Cuttino added. “They’d seen government engage in support for new and emerging industries—computers, trains, railroads and others. They couldn’t understand why not this sector.”

As a result of our policy confusion, “we continue to innovate, but we don’t necessarily reap the rewards of our innovation and risk taking,” LeMieux said. “That’s passed to other countries to be able to build, manufacture, and deploy these technologies.”

But new national policies would create opportunity as well. A national Clean Energy Standard could stimulate demand for renewable energy. Such a standard would be broader than state renewable energy standards in that it might include natural gas and nuclear. The nation could invest more in basic energy research, which lags dramatically behind comparable investments in the health-care and defense sectors, Cuttino said.

For example, the Advanced Energy Manufacturing Tax Credit, which was established as part of the 2009 Recovery Act, provided a 30 percent tax incentive for investments of clean energy manufacturing. Far more companies applied than received funds, and it was documented to create 17,000 jobs at 180 facilities in 43 states, Cuttino said. The tax credit has expired but could be renewed.

Clean-energy business leaders also suggested such measures as getting rid of special tax credits for oil and gas industries. Some suggested getting rid of all subsidies, or taxing the health and environmental costs incurred by burning gas, oil and coal, Cuttino said.

“Now is the time for our policy makers to really level the playing field so that entrepreneurs and business leaders can compete with our competitors throughout the world,” LeMieux said.

We also need a clear national policy aimed at phasing in more clean energy, LeMieux said. “Quite a few other countries are leading the charge in terms of clean energy. All have a national energy strategy.”

That strategy should include a clean energy standard, the business leaders assembled by Pew concluded. Although 33 states have renewable portfolio standards, the lack of a federal standard harms the industry and keeps it from growing, LeMieux said.

“We’re trying to tell people in Washington, D.C., that this is a big issue.”

With effective policy changes, the Midwest could become a national leader in clean energy manufacturing, technology and R&D, LeMieux said.

“The Midwest is the manufacturing powerhouse of the nation. It always has been,” he said.

Companies producing those jobs could make renewable energy components for export as well as domestic markets, Arnold said. Abound Solar, a Colorado-based company, was planning to create 800 jobs in Tipton, Indiana, to manufacture solar photovoltaic panels and they were planning to export 90 percent of what they made. In that case the plans were canceled, but they showed what’s possible, Arnold said.

The United States in general, and the Midwest in particular, “has the manufacturing know-how to put out a quality product,” Arnold said.

The policy changes Pew suggests could go a long way, but changes at the state level are also essential, Arnold said.

Germany and Italy, for example, have feed-in tariffs, which reward people for installing solar panels by ensuring a long-term, steady, and high price for the electricity they generate. If Midwestern states chose to establish such policies, markets would grow, helping the region’s clean-energy industry flourish, Arnold said.

In Indiana, in contrast, “you can’t buy electricity from anyone other than your friendly electric utility,” she said. Policies that allow more choice would grow the market for renewable energy, she emphasized.

Other state and local policies could spur demand for renewable energy in the region. Today, there are people in urban neighborhoods who might want to install solar panels but don’t have good exposure to the sun. If a church in the neighborhood has an annex with a great rooftop, they could provide solar power to their neighbors, but only if local and state policies allow for community energy systems, Arnold said.

“I’m not sure how to do that with national legislation. I think it has to be done at the state level to permit more creative ways for people to own a piece of a small distributed system,” she said.

“Yes, there’s an overriding need for national policy, Arnold concluded. “but the real nitty-gritty work still has to take place at the state level.”

Editor’s note: An earlier version of this story misidentified the solar company that had planned to locate in Tipton, Indiana.