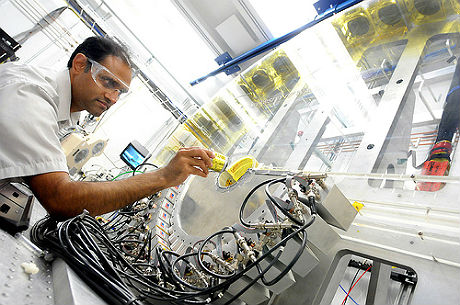 Chicago has often been called the nation’s candy capital, murder capital, basketball capital, steakhouse capital and even the capital of “false confessions.”

Now Chicago boosters are planning to add the title “battery capital” to the list (though that title is already claimed by Holland, Michigan, thanks to two factories that opened last year).

Advanced batteries are crucial to a cleaner and more efficient energy future, many experts say. Developing better batteries for electric vehicles could replace emissions-spewing trucks, cars and machinery. And improving giant batteries to store energy on the grid or in buildings is key to large-scale deployment of solar and wind energy.

In November, the U.S. Department of Energy announced that Argonne National Laboratory in suburban Chicago had won the heated competition for a $120 million, five-year grant to develop a battery research and development hub.

This means a stand-alone battery facility will be built at Argonne, and the lab will partner with prominent universities and private companies in a multi-faceted initiative that aims to explore fundamental yet vexing science and engineering questions while encouraging venture capital start-up companies and established multinational corporations to channel their findings into commercial applications.

The hub will enjoy a symbiotic relationship with Chicago’s existing clean energy entrepreneurial scene and with municipal efforts to promote electric vehicles – Mayor Rahm Emanuel has also said he wants Chicago to be the electric vehicle capital of the nation. Within a week of the Department of Energy announcement, Emanuel also made four other announcements related to electric vehicles — including the opening of a Smith Electric Vehicles factory making electric trucks.

The Clean Energy Trust, a partner in the battery hub, works with city officials, researchers and investors to foster clean energy start-up companies and innovations in the Chicago area. City and state officials have also made commitments to developing an advanced grid of the type that would benefit greatly from improved energy storage options.

Along with the Energy Department funds, Illinois Gov. Pat Quinn promised $5 million in capital and he is working with the state legislature to offer another $30 million for the Joint Center for Energy Storage Research – or JCESR (pronounced J-Caesar) — being built as the nerve center of the battery hub.

Jeff Chamberlain, JCESR’s deputy director, explained that the battery hub will give researchers the chance to explore “basic” yet tricky questions that industry forces rarely find the time or resources to address.

The idea is that breakthroughs in understanding how atoms act and interact will allow researchers to overcome some of the problems that have so far curbed the development and production of more powerful and more efficient batteries.

“At Argonne we’ve worked on batteries for many decades and usually the question we’re trying to answer is ‘can we make a technology work?’” said Chamberlain. “In our proposal we instead said ‘how does matter function?’ We’re using particle-scattering devices to look down at the atomic level at what’s happening during use of a battery…It really is about moving atoms and electrons and nano- and micro-particles around.”

Chamberlain said a major goal is developing batteries from multivalent ions. Lithium ions in the batteries currently used in electric vehicles are monovalent, meaning they have only one electron in the atom’s outer shell easily accessible for chemical reactions. Batteries made with magnesium ions with two such electrons (divalent) or aluminum ions with three (trivalent) could be far superior for electric vehicles and other uses.

Chamberlain said another hope is to perfect a non-aqueous (or non-water-based) battery for energy storage on the grid or at the sites of wind and solar arrays.

Chamberlain thinks that once such breakthroughs are made, the resulting technology innovations will be perfected and brought to market much more quickly than in most situations. That’s because of the structure of the hub, wherein researchers will be in constant contact with private developers and investors who can begin the process of honing in on a useful product as soon as promising research emerges.

The intellectual property resulting from the battery hub’s research will be available for anyone to build upon, while the companies and partners working directly with the hub will have a “head start,” in Chamberlain’s words.

“Normally the innovator is at the bench thinking, developing, publishing, talking to industry,” before commercial developers even get involved, Chamberlain said. “What we’d like to do is compress that serial process or, even better, think of it not as serial. The reason we have companies operating with us is they have very early insights into what we’re doing, so they can take a license very early and contribute to the research.”

Amy Francetic, executive director of the Clean Energy Trust, said that her organization will work with an advisory panel to review the hub’s research twice a year and share results with potential investors. “We’re committed to finding the right path to market for all this science,” she said. “Maybe it’s as a portfolio of investors, maybe it’s a small company or a large company.”

She added that utility policies and state laws related to the grid and electricity distribution could be mutually beneficial with the development of electric vehicles and energy storage systems that the battery hub will explore.

“The way we price electricity could make it cheaper to own electric vehicles, and could speed the adoption of electric vehicles,” she said. “And over time we’ll have one of the most sophisticated grids in the country, and that will be very complementary with the battery science.”

Since 2010 the Department of Energy has funded three other similar hubs: one in Oak Ridge, Tennessee, focused on the modeling and simulation of nuclear reactors; one in Philadelphia based on energy-efficient buildings; and one at the California Institute of Technology exploring the development of fuels from sunlight. A fifth hub specializing in critical materials research is in the early phases.

Chamberlain said the battery hub is the most closely linked with the real-world marketplace.

“At Caltech they’re looking at turning photons into liquid fuels,” he said. “That market doesn’t exist yet. We’ll be doing our research and inventing in a field where the lithium ion market is already $13 billion and the overall (battery) market is $50 billion to $70 billion. When we invent something there are already masses of companies out there ready to use it.”

Corporate partners are the Dow Chemical Company; Applied Materials, Inc.; and Johnson Controls, Inc. Johnson Controls is the largest battery manufacturer in the country, based in Milwaukee with a factory in Holland, Michigan, that makes electric vehicle batteries. Holland is also home to an LG Chem factory that supplies batteries for the Chevy Volt and Ford Focus.

A big week for electric vehicles

The announcement of the Argonne battery hub capped a week of electric vehicle-related announcements by Mayor Emanuel, including a program offering a bidding advantage on city contracts for companies with green fleets, the opening of the Smith electric truck factory, and a voucher program for fleet buyers. The following week, he announced the city will add 20 electric vehicles to its own fleet.

Under the bid incentive, private companies bidding on city contracts – for example anything from providing copy paper to filling vending machines – will gain an advantage over competitors if at least half their fleet is composed of electric or alternative fuels vehicles and their fleets spend at least half their time in the Chicago area (the vehicles don’t actually have to be used in the fulfillment of their contracts with the city). The incentive is structured in the same way as city programs that give preference to minority- and women-owned businesses.

“It is actually incentivizing the private sector to green their fleets,” said mayoral spokesman Tom Alexander. “It makes them more competitive in doing business with the city, and it’s making sure they are in keeping with the city’s values.”

Meanwhile, the $15 million voucher program is expected to spark the purchase of about 250 electric vehicles, with applications opening this spring. Buyers get the incentive at the point of sale, rather than having to apply for a refund. And the program is designed in a novel way, Alexander said, that encourages fleet owners to replace their largest vehicles with electric ones first.

The vouchers will be paid with federal funds awarded to the Chicago Metropolitan Agency for Planning under the Congestion Mitigation and Air Quality (CMAQ) Improvement Program, a U.S. Department of Transportation initiative.

The city itself plans to purchase 15 electric “medium duty” trucks made locally by Smith Electric Vehicles, three of them in 2013. It has already bought four Ford Focus hatchbacks. And Chicago has signed a contract to buy one electric garbage truck from Motiv Power Systems. If it performs well compared to traditional garbage trucks, more orders may follow.

Smith currently provides electric trucks for private-sector customers including PepsiCo, Coca-Cola, DHL and FedEx. Proponents note that electric delivery trucks are perfect for a city like Chicago since they spend their days stopping and starting in traffic – which causes significant diesel emissions from traditional vehicles – and their total daily mileage is low enough it can often be accomplished on one battery charge.

Alexander said the city measures are all part of the larger mission of nurturing a climate conducive to manufacturers, financiers and suppliers related to the electric vehicle and battery industries.

Rather than offering direct subsidies for electric vehicle or battery-related companies, Alexander noted that policies that increase the number of electric vehicles in city and private fleets inherently provide a motivation for related industries to locate or do business in Chicago. For example, Smith Electric Vehicles would likely sell to Chicago-area customers using the city’s voucher program.

Chamberlain and Alexander said they think Argonne won the competition for the battery hub in part because their proposal promised Chicago would serve as a real-world laboratory for pilot technologies developed at the hub.

“They were intrigued at the prospect of not only doing research but building an environment where research could be transferred into the marketplace,” said Alexander. “It’s not like they’re coming up with innovative stuff and they’re going to force it on you. They are going to work with the private sector from day one. That’s huge, people love that.”