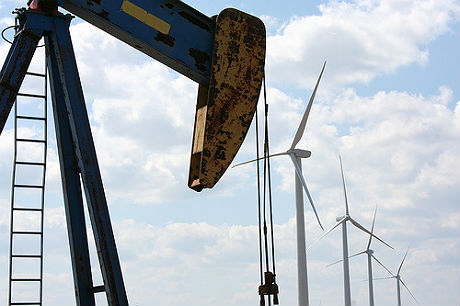 Since the 1980s, U.S. oil and gas companies have benefited from a tax loophole big enough to build a pipeline through.

By organizing as a type of partnership instead of a corporation, companies that extract, process or transport “depletable” natural resources have been exempt from corporate income taxes.

That word — “depletable” — specifically excludes renewable energy, but a long-simmering effort to change that now appears to be gathering some steam in Washington.

U.S. Sen. Chris Coons, a Delaware Democrat, introduced a bill last year that would give wind, solar and other renewable projects the same tax benefit that fossil fuels have enjoyed for decades.

The Master Limited Partnerships Parity Act has picked up bipartisan support, including Republicans from oil-rich states such as Alaska Sen. Lisa Murkowski and Rep. Ted Poe of Texas.

But the bill also finds itself going against broader political momentum in Congress to eliminate loopholes and exemptions in order to raise revenue and lower tax rates.

The first master limited partnership, or MLP, was devised in 1981 by a Minneapolis drilling and exploration company, Apache Oil Corp., now based in Houston. The structure offered a way to sell publicly tradable stock without being taxed as a corporation.

The model quickly spread to other oil and gas firms, as well as other industries seeking the same tax advantages, including real estate, hotels and motels, and restaurants. By the time Congress intervened in 1987, even the Boston Celtics had formed an MLP.

Worried that too many corporations would become MLPs to avoid taxes, Congress prohibited them except for companies that earn 90 percent of their income from specific investment, real estate and natural resource activities, including oil and gas operations.

“It just doesn’t make any sense. It never made any sense why MLPs were available to them and not to us,” says Blake Nixon, president of Geronimo Wind, a Minnesota wind developer that has been lobbying for MLP changes since 2009.

Allowing renewable companies to organize as MLPs is among a handful of tax reforms the industry and its supporters say will help level the playing field with fossil fuels. Others include allowing them to organize as real estate investment trusts, or REITs, and letting renewable tax credits be claimed by more types of investors.

Currently, there are only about 20 large financial institutions that have large enough tax bills to claim the full value of federal credits awarded to renewable projects. Wind and solar developers that want to take advantage of the credits need to recruit one of these players to invest in every single project.

“They basically get to set terms,” says Nixon. “Because there’s so few of them, there’s very little flexibility in the terms and in the costs of the money. There’s very little competition among them to drive those costs down.”

Even though borrowing rates are at historic lows, these large renewable investors charge interest rates of 8 to 9 percent, after tax, per project, says Nixon, compared to 4 to 5 percent that’s common for MLPs.

As the cost of wind and solar technology has fallen, financing costs have stayed high and become a bigger share of overall project costs, says Felix Mormann, an associate professor of law at the University of Miami and a fellow at Stanford’s Steyer-Taylor Center for Energy Policy and Finance.

Not a ‘magic potion’

“One concern we have is that some folks who support MLP are saying maybe this is a replacement for [production tax credits],” says Condo. “We don’t agree with that.”

The Bipartisan Policy Center, a Washington, D.C., think tank, agrees. In a 2011 policy brief it concluded, “Because MLP s would only increase the eligible investor pool … by themselves they would most likely not supplant the tax incentives currently in place.”

Coons’ bill is getting more attention than previous efforts to extend MLPs to renewables, but they’ve still been getting “a fair amount of pushback from Capitol Hill,” says Keith Martin, a lawyer and lobbyist with Washington, D.C., firm Chadbourne & Parke.

Martin is scheduled to speak about MLPs and REITs next week at the Wind Power Finance & Investment Summit in San Diego.

If the bill advances, it would likely move forward as part of a broader corporate tax reform bill that Congress is expected to take up either this year or next year, says Martin. Even if it succeeds, the impact could be muted if Congress decides to tax partnerships, as some have proposed.

Martin says both parties want to lower the current 35 percent corporate income tax rate. Democrats want to lower it to 28 percent and Republicans are aiming for 25 percent.

“It’s a monumental task to take the rate that low,” says Martin.

Adding exemptions will make it tougher. A 2011 Congressional Research Service report estimated that extending MLPs to renewable energy firms would cost the U.S. Treasury about $2.8 billion between 2010 and 2014.

An alternative, that report suggests, if the goal is a level playing field: close the loophole for oil and gas companies.