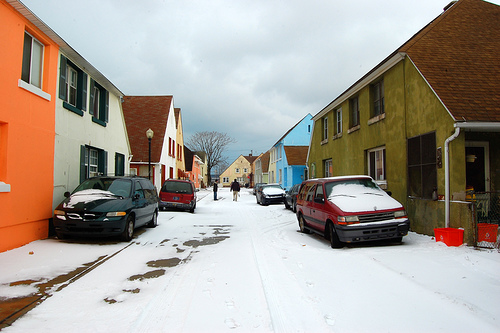 A street in Marktown, Indiana. (Photo by Eric Allix Rogers via Creative Commons)

EAST CHICAGO, Indiana — Billowing plumes of white steam swirl around the towering steel matrix at the BP Whiting oil refinery, while blossoms of orange flame from flares light up the cold night sky.

This is the backdrop to Marktown, an unusual enclave built in 1917 to house employees of a nearby steel mill owned by Chicago industrialist Clayton Mark.

About a quarter of the pastel, stucco Marktown homes are now vacant and crumbling. There is a general appearance of abandonment and decay. But on the evening of Jan. 23 the Marktown community center was bustling, packed with residents confused and alarmed about the news circulating over the past few days.

“This is more people than I’ve ever seen in Marktown,” remarked one local, who declined to give his name.

Kim Rodriguez, a 54-year-old lifelong resident, had called the meeting to try to save the neighborhood.

That’s because BP officials recently acknowledged they are looking to buy up and raze Marktown homes.

Since its founding, Marktown has been surrounded on all sides by heavy industry. But BP’s $3.8 billion expansion to process Canadian tar sands oil means the refinery is now much closer to the historic district, separated from the northwest edge of town only by 129th Street and a relatively narrow green space.

Rumors had swirled for a few weeks about BP’s meetings with several local residents, including at least one man who had approached the company seeking to sell numerous properties and another, history buff Paul Myers, who is passionate about preserving Marktown. A Jan. 15 story in the Times of Northwest Indiana stoked residents’ fears.

Between the many boarded-up, disintegrating buildings and the looming refinery — not to mention a tin plant, the ArcelorMittal steel mill, BP tank farms and other industry nearby — Marktown isn’t what most people would consider idyllic.

But it is also a place rich with history, where neighbors know each other, large extended families live in multiple houses on the same block, and a spacious home can be purchased for less than $20,000.

It is a place that Rodriguez said she will not leave, no matter what.

“Marktown is once again in crisis,” she told the about 70 residents at the meeting. “BP is planning to purchase our homes one by one and tear them down.”

A showdown to come

BP spokesman Scott Dean said in an email that the company is “interested in the properties along its boundaries” to provide additional green space, as well as parking and equipment-staging areas for the refinery.

Residents who don’t want to leave their homes can simply refuse to sell to BP. But attendees at the meeting clearly saw themselves facing a major showdown with the powerful company. They think that two men who own numerous buildings and do not live in the neighborhood will sell their properties, and they worry BP officials will tempt or pressure other residents to sell.

“Someone might think, ‘Oh $15,000, I’ll be rich!’” said Yaya Torres, 33, who grew up in Marktown and now raises her son in a house near her parents. “That’s all the homes are appraised at here, and that doesn’t even pay rent [elsewhere] for two years.”

The more homes that are sold and demolished, the harder it will be for remaining residents to jumpstart a rehabilitation of Marktown. Rodriguez, Myers and other residents have been pushing for comprehensive restoration for more than a decade. In 2008 they drafted a formal revitalization plan.

The non-profit preservation group Indiana Landmarks holds conservation easements on a number of Marktown properties, and Indiana Landmarks northwest field office director Tiffany Tolbert attended the meeting to tell residents “we are prepared to protect those if it comes down to it.”

A street in Marktown, Indiana. (Photo by Eric Allix Rogers via Creative Commons)

In 1975 Marktown – which is officially part of the city of East Chicago, while the refinery is in adjacent Whiting – was placed on the National Register of Historic Places. That means federal resources cannot be used for redeveloping or destroying structures.

But the historic designation offers no such protection against private development or demolition by an entity like BP.

Dean said that, “BP respects the historical designation of the Marktown Community and is exploring preliminary possibilities related to the historic designation,” though he also said that “once acquired, the property would be razed.”

A month earlier, sitting at her kitchen table surrounded by Christmas decorations and countless family photos, Rodriguez reminisced about her childhood in Marktown. Ice-skating on the frozen flooded basketball court, playing ping pong in the community center and buying snacks at the local bar, where kids were allowed as long as they didn’t sit on the stools.

“This is my home, the only place I know,” she said. “I know there’s a big world out there, but it scares me. When it comes to trying to take Marktown from us, I’m going to fight them. If I lose in the end, I’m going down with it.”

At the meeting, Rodriguez pleaded with other residents to join her.

“I need your help to do this,” she said, standing below a construction paper sign saying “Kids Against Bullying.” “How important are your homes to you? How important is the Marktown community? I will go to bat for each and every one of you, but I can’t do it alone…otherwise my home might be the only one left standing there.”

A ‘step child’ or a priority?

It looked like Rodriguez had no shortage of supporters. Rosendo Cuevas, an East Chicago city councilman, asked for a show of hands from people who want to hold on to their homes. About half the crowd responded.

“If the people stand united, it’s not going to be an easy fight for BP,” he said.

“BP has a lot of bad PR out there, they don’t need this in the newspaper,” she said. “Don’t let them do those trickery things where they don’t give you any time to organize…Don’t let them catch you sleeping, be awake.”

Three of East Chicago’s nine city council members were at the meeting, along with at least one former council member. While they expressed their support for saving Marktown, numerous residents complained that the East Chicago city administration has long “treated Marktown as a stepchild,” in the words of resident Javier Madrigal.

Torres, who works as a trainer in an early childhood education program in Chicago, said she does eventually want to move away from Marktown, “but I don’t want to sell my house to BP, I want to sell it to a family that wants it. I want to be able to bring my son back here and show him where I grew up.”