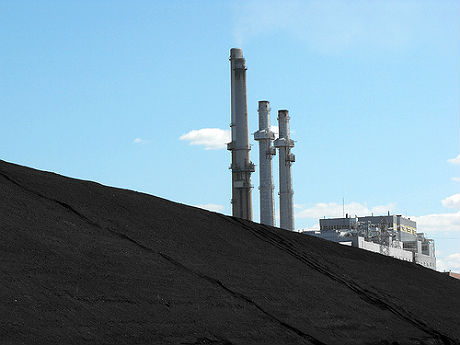 The Will County Generating Station is one of Midwest Generation's Illinois coal plants. (Photo by Darius Norvilas via Creative Commons)

JOLIET, Illinois — Workers from Midwest Generation’s four Illinois coal plants packed a meeting of the Illinois Pollution Control Board in the Chicago suburb of Joliet Tuesday, as company officials asked the board to delay 2015 and 2016 deadlines for installing sulfur dioxide controls on its plants as mandated under a 2006 state agreement.

Midwest Generation argued that because of economic forces unforeseen when the agreement was signed – including its December filing for Chapter 11 bankruptcy — there is no way it can afford the $440 million needed to meet the deadlines. Midwest Generation’s filing called the request a “pause” in its pollution control plans that would allow it to defer $210 million in investments.

Company officials said the plants would get back on the original compliance schedule by 2017, when they expect a rosier financial outlook including the resolution of bankruptcy proceedings.

“In no way, shape or form will we receive a free pass,” Midwest Generation president Douglas McFarlan told the board.

Midwest Generation’s Fisk and Crawford plants in Chicago closed in August; and experts have theorized the company will close parts or all of its remaining plants, three in the Chicago suburbs and one in central Illinois.

Environmental leaders and local residents who spoke at the hearing expressed doubt that Midwest Generation would keep its promises to install pollution controls given more time.

“It sounds to me like this variance will not save people’s jobs, they just want to run these plants as long as they can without cleaning them up,” said Verena Owen, who lives near the Waukegan plant north of Chicago.

McFarlan told the board that “we are indeed immersed in financial hardship but we’re still operating a viable fleet of power plants in this state and we’d like to continue to do so.”

“Our employees and other supporters understand there is no guarantee we can maintain all of our operations for the long haul,” he continued. “But we and they believe this variance would put us in the best possible position to retain the greatest number of jobs while still protecting the environment.”

(See Midwest Generation’s request and other filings in the docket here.)

The variance would give Midwest Generation more time to meet limits on total sulfur dioxide emissions across its four plants, as required under the multi-pollutant emissions reduction agreement between the state and Illinois power companies that runs through 2019.

In September the pollution control board granted Ameren Energy Resources a variance giving it more time to install pollution controls on its Illinois plants to meet the state limits. Environmental leaders predicted that variance would encourage Midwest Generation to request similar concessions.

“We had said if you give a variance to Ameren then Midwest Generation will be here next, and sure enough here they are,” said Environmental Law and Policy Center senior attorney Faith Bugel (the ELPC is a member of RE-AMP, which also publishes Midwest Energy News).

At the pollution board hearing, Bugel cited Ameren’s previous testimony that its variance was needed to protect Illinois jobs. Then she quoted from recent Ameren filings with the Securities and Exchange Commission indicating it will likely discontinue operating its merchant generator plants – the ones that sell power on the open market, which were the subject of the variance. (The filing noted that Ameren “intends to, and it is probable that it will, exit its merchant generation business segment before the end of the previously estimated useful lives” of those plants.)

In both the Ameren and Midwest Generation cases, another power company, Dynegy, filed comments opposing the variance requests, saying it would be unfair to give the other companies extra time when Dynegy had already made investments to meet the state rules.

McFarlan indicated that Dynegy should not invoke competition related to Midwest Generation, since Dynegy (like Ameren) sells its power in the MISO market, while Midwest Generation sells in the PJM Interconnection. Both Ameren and Midwest Generation also made the argument that Illinois’s strict state standards put the companies at a competitive disadvantage with generators in other states that sell their electricity on the same markets.

Midwest Generation’s variance request noted that when the federal Mercury and Air Toxics Standard (MATS) takes effect in 2015, its own financial prospects will improve since the interstate playing field will be leveled.

Midwest Generation officials testified that even with the variance, its sulfur dioxide emissions will be lower than originally predicted over the course of the state agreement, in part because it closed the Crawford and Fisk plants earlier than planned.

In testimony and filings Midwest Generation offered that Crawford would not operate in 2013 and 2014 if the variance is granted. Critics called this disingenuous, since Crawford was closed for market reasons and under an agreement with Chicago city officials, and one of the stacks has already been dismantled.

“They are asking that credit be given for future pollution reductions based on what a shuttered plant could generate,” testified Brian Urbaszewski, environment programs director of the Respiratory Health Association of Metropolitan Chicago.

He showed the board before and after photos of the Crawford station since the partial removal of one stack, and said the company was threatening to restart Crawford “when it’s clear they don’t have the physical ability to actually run that plant…It’s like offering to not drive a car that doesn’t have an engine.”

Meanwhile, numerous elected officials, union leaders and Midwest Generation employees who offered public comments emphasized that the company employees about 850 people in Illinois, most of them members of the IBEW Local 15 union, and contributes millions to the tax base.

The company also hires hundreds of union contractors and spends about $400 million annually on goods and services from largely local suppliers. One mechanical parts supplier said that Midwest Generation’s business drives him to hire about 1,400 seasonal employees each year.

“This is not just about jobs, it is about dependable electricity,” said Robert Schwartz, an official with the Boilermakers union. “It keeps our traffic signals working, our fire and burglar alarms and health care equipment operating, all these things vital to our well-being.”

A ‘tsunami of adverse effects’

McFarlan told the board that Midwest Generation has already met requirements for nitrogen oxide and mercury reduction under the state agreement, including an upgrade at the Crawford plant less than a year before it closed.

Without the variance he said it will be nearly impossible to raise financing needed by April to meet the 2015 and 2016 deadlines. Past lenders — namely parent companies Edison Mission Energy and Edison International, and banks – are no longer willing to finance Midwest Generation. Edison Mission Energy is also in bankruptcy proceedings, and during a November shareholder call Edison International CEO Ted Craver made clear that the company did not plan to carry the financial burdens of its subsidiaries.

“Midwest Generation views seeking a variance of this nature to be a last resort,” McFarlan told the board. “We would not be here if we had not concluded we exhausted every self-help measure available to us.”

Edison Mission Energy vice president and treasurer William Petmecky said the changes have meant Midwest Generation is selling less power on the open market over the last few years – since it does not make sense to run the plants when profit margins are too low or nonexistent.

“In sum,” he said, “curtailments would threaten the continued existence of Midwest Generation and the future viability of the stations. Shuttering our stations would have devastating impacts on hundreds of workers and their families.”

McCluskey told the board that Midwest Generation has already switched to more expensive ultra-low sulfur coal to reduce its emissions. Health and environmental groups have suggested coal plants convert to burn natural gas, but McCluskey said that would not be economical.

Midwest Generation plans to reduce sulfur dioxide emissions by installing dry sorbent injection, a process wherein a mineral compound combines with sulfur gas to create a powder that can be removed. The process also necessitates the installation of electrostatic precipitators to remove the extra particulate that is created. The company apparently will not install scrubbers, which remove a greater proportion of sulfur dioxide but are more expensive.

Several speakers at the hearing said that market forces including the impact of regulations should be allowed to determine Midwest Generation’s fate, and they urged the board not to intervene by allowing exceptions to the state rules.

“This variance can’t fix an unfixable company, and Mr. Craver seems to know that,” Owen told the board, invoking the Edison International CEO. “It’s time for Midwest Generation to come clean and disclose to its workers and the communities what its plans are for those plants.”