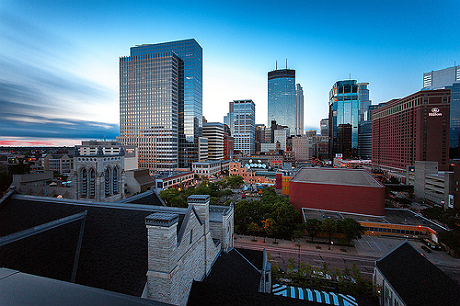 Minneapolis is poised to become the first city in the Midwest to adopt an energy benchmarking and disclosure rule for commercial buildings.

“The intent of this ordinance is to use market force — not performance or design mandates — to increase energy efficiency in existing commercial and city-owned buildings,” said Brendon Slotterback, the city’s sustainability program coordinator. “It’s also intended to provide consistent, transparent reporting on energy and water use data, not just to owners and managers, but to tenants, potential tenants and the public at large.”

The proposal originated from a Twin Cities green jobs committee called Thinc.Green, which is made up of business, union, nonprofit and city leaders from Minneapolis and St. Paul. It’s modeled after similar ordinances in half a dozen other cities, including New York, San Francisco, and Austin, Texas. In the Midwest, Chicago is also considering a commercial benchmarking and disclosure policy.

The reporting would be completed using Energy Star’s free, online Portfolio Manager software, which is already used by more than 4,300 commercial building owners in the Twin Cities area, according to the U.S. Environmental Protection Agency.

The city would disclose data on its own buildings in 2013. Only the largest commercial buildings — over 100,000 square feet — would need to comply in 2014, and the program would extend to 50,000-square-foot in 2015. In total, the ordinance would cover 630 buildings representing about 75 percent of the city’s total commercial square footage.

The city would wait one year to publish the first results so that owners would have a chance to make improvements.

Stephen Todd, a Twin Cities sustainability consultant, said his firm would likely hire another employee and more contractors to help Minneapolis building owners improve efficiency before they need to start reporting energy use. That’s in part based on his experience working in Austin, Texas, where a 2011 benchmarking and disclosure policy is already having an impact.

“What I see down there is that it has motivated many commercial real estate organizations to look at what they can do to optimize the performance of their buildings and try to improve the relative efficiency,” Todd said. “They anticipate more market pressure… on behalf of tenants in evaluating office space.”

While building owners usually pay for things like windows and HVAC systems, tenants are typically the ones who pay the energy bills. That’s created a split-incentive problem in commercial real estate.

Giving tenants better information for comparing building energy use gives building owners more incentive to invest in efficiency. Some may be able to charge a “green premium,” but Todd said what’s more likely is a “brown discount,” in which an existing tenant might be able to use a building’s relative inefficiency to negotiate better lease terms.

The impact of Minneapolis’ ordinance would have potential to extend beyond the 630 buildings required to report, Todd said. If it’s successful, tenants could start to expect Energy Star scores from anyone before signing a lease.

“If that information is readily available in Minneapolis, they’re probably going to ask the same questions in St. Paul and Bloomington,” Todd said.

“We question whether the proposed building rating system would add to the success of market forces already in play and are concerned about the potential for unintended negative consequences,” said Kevin Lewis, executive director of BOMA Greater Minneapolis.

Lewis described a hypothetical building with outdated systems that couldn’t afford expensive retrofits. “Could they lose tenants and could they go out of business?”

David Dabson, general manager of Piedmont Office Realty Trust, asked that the published disclosures only identify buildings by an ID number or address, not by name, so that the scores don’t “misrepresent” tenants who names appear on the building.

Council Member Glidden said the ordinance is about taking best practices already used by some and spreading them across the city.

“It’s been through BOMA that there’s been a light shown on the great practices already in place by a lot of building owners… of what can happen through voluntary participation in these energy saving programs,” Glidden said.

The annual report would take between two to five hours to complete using the Energy Star website. Owners or managers enter information on the buildings size and use along with metered utility data. From that information, the city would publish online an energy intensity rating, an estimate of annual greenhouse gas emissions, and the building’s Energy Star score, which is relative to other buildings in the country.

The city has already received a grant from the Minnesota Pollution Control Agency for training building owners who would be required to use the tool.