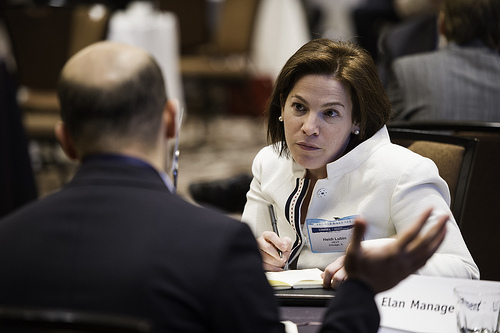 Heidi Lubin at networking session at the Industry Growth Forum in Denver in October. (Photo by NREL via Creative Commons)

Heidi Lubin has long been an avid outdoorswoman – she is a certified kayaking and skiing instructor — so she feels strongly about protecting the environment. And in 1999 she spent time in Nigeria with the Kudirat Initiative for Democracy, seeing first-hand the violence and chaos that was in part fueled by the country’s oil resources.

These experiences and values are part of the road that has brought Lubin, at age 34, to be CEO of an award-winning start-up electric motor company.

The motors designed by Chicago-based Hybrid Electric Vehicle Technologies (HEVT) don’t use the rare earth metals that are a key component of most modern electric motors. While rare earth metals are not actually rare, their mining is concentrated in China (which provides 97 percent of the current world supply), and has caused serious social and environmental problems.

While much attention has been focused on the need to create better batteries to power electric vehicles, experts note that improved electric motors are also key.

HEVT’s technology is an improvement on the switched reluctance motor, an existing design that isn’t in widespread use because, until now, it’s been difficult to build one that runs smoothly.

“The concept for this type motor has been around for a while – they’re updating the physical motor design and applying new software based controls to it making the overall system work much better,” said Niccolo Aieta, director of the Innovation and Entrepreneurship Center at the federal National Renewable Energy Laboratory in Golden, Colorado.

Lubin noted that advances in computing and electronics have also made the components and production processes central to switched reluctance motors much more cost-effective.

“Switched reluctance motors have roots maybe even in the 1850s to 1870s, but the technology has really been enabled increasingly by the computing industry: better, faster cheaper power electronics, semiconductors, those kinds of things,” she said. “We’re now at a tipping point where things are cheap enough and fast enough that you can do this.”

HEVT is still in the pre-production stage, but Lubin said they expect the motors to be rolled out soon in electric-assisted bicycles, which are especially popular as a primary mode of transportation in Asian countries.

The company is working on motors in the range of 250 watts to 1 kW, but Lubin said the technology could be scaled to the higher power levels needed for an electric vehicle. HEVT is part of a consortium led by the University of Texas at Dallas focused on developing a switched reluctance motor for a plug-in hybrid Ford F-150. HEVT is also working with other potential customers and investors and has funding from the U.S. Department of Energy’s ARPA-E program.

Aieta said HEVT’s technology could have wide-ranging relevance and could be used to manufacture components for other companies’ supply chains or licensed to other companies like electric vehicle-makers.

“The whole idea of rare earth metal supply concentration is really a national issue – a critical materials issue, a national competitiveness issue, a national trade issue,” Aieta said. “HEVT being able to address that is an overall good thing. At the end of the day (their design innovations will have) probably helped them out a little and everyone else out a lot.”

HEVT grew out of the Power Electronics and Motor Drives Laboratory project at the Illinois Institute of Technology, starting in 2005.

Lubin served as an advisor for the initiative while working at the law firm Kirkland and Ellis restructuring debt for automotive, aviation and energy companies. In 2011 HEVT was restructured and Lubin was named CEO.

Her varied background also includes a law degree and an MBA from Northwestern University and a bachelors degree in history and globalization at the University of Michigan; a stint doing conflict resolution in Africa; and research on topics ranging from urban development in Detroit to children orphaned by HIV.

Under Lubin’s watch, HEVT has won significant recognition and awards.

In November 2012 the company took the $250,000 grand prize at the Global Cleantech Open in San Jose. This is part of a business accelerator program wherein the Cleantech Open works with companies in different regions for five months; in October HEVT was named one of three finalists to represent the North Central region in the global competition. HEVT was also a 2012 finalist in the Brinks Innovation Competition.

Cleantech Open Midwest Region regional director Justin Kaster said HEVT is a prime example of a growing wave of technology start-ups that are putting the Midwest on the map.

“In the Midwest there are quality start-ups, quality research, really good universities, the opportunity to lead in clean tech,” said Kaster. “But where the money is, it’s still the early stages. You’ll find more investment on the coasts.”

Kaster and Aieta both said that Lubin’s personal style and the HEVT team – which includes chief technologist Dr. Ali Emadi — have stood out for their teamwork, complementary skills and ability to present their ideas. They also noted that the company has strong patents and intellectual property protection, essential to profiting off their innovations.

“Part of what we’re looking at is can we scale it broader, look at an industry-wide problem rather than a mom and pop approach?” said Kaster.

Rare earths are central to widely-used permanent magnet electric motors because of their powerful magnetic properties. The switched reluctance motor doesn’t depend on magnets, but rather a rotating circular disk housed within a stationary circular disk. Both disks have poles protruding toward each other — the stationary poles on the outside are wrapped in copper windings that when electrically charged draw the poles on the rotating disk toward them – and hence spin the rotor around in a circular motion.

“It’s like turning on and off a little light bulb in each pole, and the motor keeps wanting to go where the room is lit,” explained Lubin.

The switched reluctance motor dissipates heat more effectively than traditional electric motors, Lubin said, which will be especially valuable in applications like the electric-assisted bike, where a steep hill might cause a different motor to overheat.

Car makers, including Toyota, have been developing motors that don’t use rare earth metals, with “alternating current induction” structures, as described in a 2011 story in The Economist. Lubin said the switched reluctance motor is superior to these induction motors because it typically uses less copper and has lighter and simpler moving parts, so it generates less heat and is cheaper and easier to manufacture.

While other countries – like Jamaica, Australia and South Africa — may break China’s stranglehold on rare earth metals, proponents of emerging non-rare-earth motors say their technology can offer other advantages in reliability, efficiency and performance.