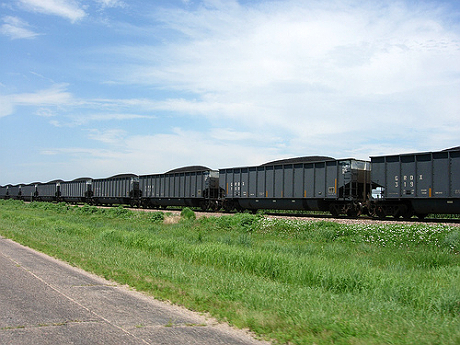 (Photo by Gravitywave via Creative Commons)

Shipments of coal on U.S. railroads dropped 11 percent in 2012, according to new figures from the Energy Department, reflecting utilities’ continued shift away from coal-fired power generation in favor of natural gas and renewable fuels for electricity.

But although coal captured a smaller share of rail deliveries in 2012, oil helped make up the difference. Last year, crude oil and petroleum products delivered by rail rose 46 percent over 2011, or by roughly 171,000 carloads, according to data from the Association of American Railroads.

Shipments of crude oil, in particular from the Williston Basin in North Dakota and eastern Montana, drove the growth in rail deliveries of petroleum products, according to AAR. And while 90 percent of the nation’s oil and petroleum products continue to flow through pipelines, the emergence of new oil fields such as the Bakken Shale formation in western North Dakota has put rail cars in high demand.

Industry and government experts estimate that the Bakken formation produced 840,000 barrels a day in December. And the Energy Department’s latest Short-Term Energy Outlook predicts the Williston Basin will see oil production approach 1.2 million barrels per day by the end of 2014.

While coal still accounts for the lion’s share of bulk commodity rail deliveries in the United States, with more than 6 million carloads in 2012, its smaller share of total rail activity reflects “lower demand from power plant operators, who turned to more price-competitive natural gas as a generating fuel,” the Energy Information Administration said in its latest “Today in Energy” report, published yesterday.

Last month CSX Corp., the nation’s largest hauler of coal, reported a 2 percent decline in fourth-quarter revenues for 2012 despite an uptick in merchandise and intermodal shipments. “These gains were more than offset by declines in coal resulting from low natural gas prices, high coal inventory at utilities and lower global demand,” the railroad said in a statement.

Luke Popovich, a spokesman for the National Mining Association, which represents the nation’s coal producers, said in an emailed statement that the trend is tied to shifting economics around electricity production and large-scale fuel switching by utilities. But, he added, “As we see a rebound in coal’s share of this market — following inevitable increases in gas prices — we would expect rail shipments of coal to rebound as well, albeit maybe not to the levels seen in the earlier part of the decade.”

Experts also note that while natural gas prices have been at historic lows the past several years, a market correction is likely as the gas industry deals with rising infrastructure costs associated with pipeline construction and more complex distribution networks necessary to feed a complex U.S. manufacturing sector.

The mining industry also remains bullish on the prospect of a growing export market for U.S. coal as countries like China and India continue to experience rapid economic growth and surging demand for electricity (ClimateWire, Jan. 30).

U.S. firms exported a record 124 million tons of thermal and metallurgical coal in 2012, and the industry expects to have another strong export year in 2013 as trade partners in established and emerging economies — including those in Europe, Asia and Latin America — look to U.S. coal to meet rising energy demand.