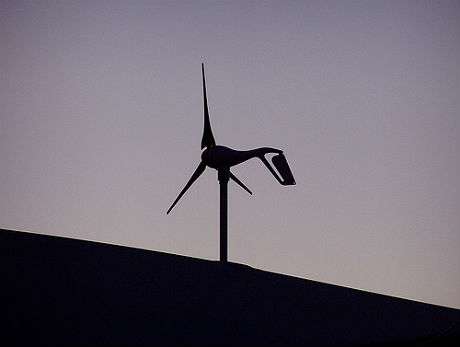 Small wind, Rankin says, has burned him too many times. He was once facing lawsuits from two clients upset over poorly performing turbines built by a company that went out of business.

Small wind “was once a very lucrative, promising, joyful and plausible business to be in,” Rankin said. “It’s not anymore. We need more competition with reliable products, lower prices overall and we need to restore consumer confidence that has been destroyed by all the charlatanism in the industry.”

But that lack of confidence isn’t the only issue facing small wind. Tax incentives in many states have fallen off, and projects also struggle with zoning issues, opposition from neighbors and a lack of uniform standards.

The American Wind Energy Association reports just 19 megawatts of small wind — defined as producing 100 kilowatts or less — were installed in the U.S. in 2011 (a figure including imports).  In total, the U.S. has 198 MW of small wind capacity installed, roughly equivalent of a utility-scale wind farm. AWEA says domestic small wind sales dropped 26 percent in 2011.

Despite those obstacles, many industry leaders and advocates see a chance for a recovery with better policies and technology.

Over the years, small wind has attracted a wide range of customers, including farmers, ranchers, cabin owners, the military and “off-the-grid wingnuts,” as Rankin calls them. But the net of potential users isn’t all that wide, and many of them are aware of the quality problems that have bedeviled the industry for years.

Mike Bergey, president of Bergey Windpower, the nation’s leading small turbine manufacturer, said “bozos and shysters” have made outrageous promises to consumers about power production and then ripped them off with poor-quality equipment.

“I can’t tell you how many times I’ve been at a home show and every third person comes up and says they heard a vertical axis turbine can take care of all the needs of a whole house,” he said. “You realize you have some explaining to do just to get to zero.”

In Minnesota, Attorney General Lori Swanson filed a lawsuit in January against Renewable Energy SD after several of its small wind turbines malfunctioned. The company’s owner had claimed his turbines would last 25 years and that they would pay for themselves within 5 to 10 years. One customer’s turbine failed after a few weeks, and others didn’t receive wind turbines at all, according to the lawsuit.

A slowing of state and federal incentives has crippled the industry, too, said Jennifer Jenkins, executive director the Distributed Wind Energy Association (DWEA). Her assertion is backed up in the 2011 AWEA small wind report.

Small wind has a federal incentive that amounts to a 30 percent credit for the cost of a system. But that’s clearly not enough to jumpstart the market. Jenny Heinzen, curriculum and training coordinator for the Midwest Renewable Energy Association, said small wind declined in Wisconsin after a brief flurry of interest from 2006 to 2008.

As utility-scale wind energy has become politicized in Wisconsin, small wind “got sucked into it — it was guilt by association,” she said.

Small wind has other challenges. The concrete base and tower alone can cost as much as $80,000 and the site must have unobstructed wind to work properly, Heinzen said. Few qualified contractors exist to install such systems.

“Solar is just easier to do — if you have a roof, and south-facing access, you can have yourself a system,” said Heinzman, whose organization has a small wind turbine at its headquarters in central Wisconsin.

Mick Sagrillo of Sagrillo Power & Light in Forestville, Wisconsin, spent 8 years as the former “wind lead” for the Wisconsin Renewable Energy Network, part of the state’s Focus on Energy. A major roadblock, he believes, has been the lack of a national zoning policy model for small wind that would help the industry work with local officials that often have little knowledge of the technology.

People fear turbines will make noise, kill birds and be a disruptive force in their communities, he said. The turbines can make for a “startling” imposition in a rural neighborhood.

“It’s like a foreign sculpture on the landscape,” Sagrillo added.

Solar, while not immune to opposition from neighbors, looks easier and less intrusive to clients, he said. Sagrillo and other advocates also point out many installations feature both power sources. When the wind doesn’t blow the sun often shines, and vice versa.

Small wind’s struggles also come after a few years of expansion prior to the recession. Even then, the industry was filled with businesses that didn’t understand the market or who wanted a quick financial kill, said Dion Johnson, CEO of small wind pole manufacturer American Resource & Energy in St. Paul.

At least some small wind companies seem to be doing well but much of their business comes from overseas – in particular the UK, which has strong feed-in tariffs, and in developing countries without a reliable electricity grid.

Bergey said his business increased last year over the previous year but exports now represent a larger percentage than domestic sales. That’s the first time that happened in at least 12 years.

“It’s too early to write the obituary for small wind — the export markets, in particular the UK, are going gangbusters,” he said. “For the major players, sales are actually up, but the U.S. contribution is down.”

Johnson has seen the same trend. Last year his business tripled and he expects this year it will double. Yet the majority comes from abroad, with recent projects in England, the Caribbean and Africa.

“Our business in the U.S. has gone down drastically,” Johnson said.

‘A lot of educating to do’

Meanwhile, the DWEA is headed for Washington, D.C. in mid-February to ask for more small wind research and guidance on permitting that could help counties and municipalities, Bergey said. A key component will be to ask that the IRS and the U.S. Treasury only give tax credits or grants to buyers of certified wind turbines.

The certification bodies could include the Small Wind Certification Council — which has approved just four turbines — and UL, formerly known as Underwriter Laboratories.

Interest remains high among distributors and manufacturers. In its first two and a half years the DWEA attracted more than 120 members, many of them from the Midwest. Wisconsin and Minnesota both have strong networks of small wind manufacturers and distributors.

“We have quite a few members in the Midwest because the wind is there and because Wisconsin and Minnesota have been incredible in educating the population,” Jenkins said. Iowa and Kansas also have many small wind installations and have made “a cultural mind shift we’d like to see in the rest of the country toward small wind,” she said.

With the right small turbine and location, a homeowner or farmer can reap the benefits of wind and see their investment pay off, eventually.

“It’s a really good potential market for farms, residents and schools,” Jenkins  said. “But we have a lot of educating to do.”