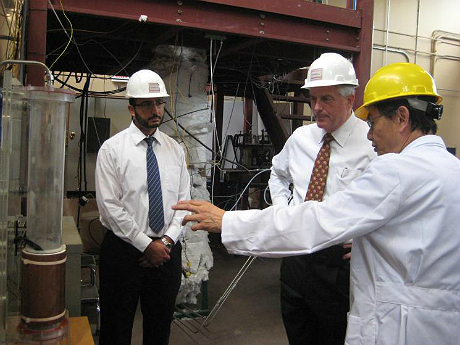 A clean-coal technology that captures more than 99 percent of coal’s carbon dioxide emissions has passed an early but important milestone on the path to commercial use, but still awaits an opportunity to be proven in a real-world setting.

The technology, developed by Ohio State University researchers with funding from the Department of Energy, could reduce the cost of carbon dioxide capture by more than half if implemented on a commercial scale, according to the researchers.

Burning coal for electricity produces twice as much planet-warming carbon dioxide as burning natural gas, along with other pollutants that cause acid rain and jeopardize human health. However, the United States holds one-fourth of the world’s known coal reserves, and coal has in the past been relatively affordable, so the Department of Energy has sought new ways to burn coal for electricity without polluting the air.

To do this, carbon dioxide and other pollutants must be captured before they are released to the atmosphere. Scrubber technologies are available now to do that for common air pollutants such as sulfur dioxide and nitrogen oxides, and such scrubbers are now installed on many (but not all) U.S. coal-fired power plants.

Capturing carbon dioxide is technologically doable, but prohibitively expensive for power companies, at least with today’s technologies. For example, the most mature CO2-scrubbing technology, called amine scrubbing, consumes a full 30 percent of the energy produced by burning coal—energy that would otherwise have produced electricity, said Liang-Shih Fan, a professor of chemical engineering at Ohio State University, who developed the new clean-coal technology.

Indeed, capturing the carbon amounts to between 60 and 70 percent of the total cost of carbon capture and sequestration, Fan said. The rest of the cost would come from the other two steps in the process: transporting the captured carbon dioxide to another site via a pipeline, and injecting deep underground.

“If you are able to capture CO2 in a cheap way, then the three steps are reasonably cheap,” Fan said.

Fan and many other carbon-capture researchers have worked toward this goal for years, and have developed more than a dozen experimental carbon-capture technologies. To date, none of them has been used in a commercial-scale coal plant, but a great deal of research and development is under way behind the scenes.

For their recent research-scale demonstration at Ohio State University, Fan’s team used a carbon-capture technology called coal-direct chemical looping that they have been developing over the last 15 years.

In contrast, the Ohio State researchers mix pulverized coal with beads of iron oxide, a compound akin to rusty iron. They do this in a reactor heated to about 1,650°F, and the coal inside reacts to produce carbon dioxide and water in the form of steam.

With the proper equipment, the steam cools into liquid water, leaving pure carbon dioxide, which can be sequestered or used for enhanced oil recovery.

After the reaction is complete, the hot iron beads are transferred to a second reactor, where they undergo combustion. This combustion is different from, say, burning a charcoal briquette, in that it produces no flame. But the hot iron beads nevertheless react with air and produce heat—“the same amount of heat as if you would have burned coal,” Fan said. That heat boils water to produce steam, which drives a turbine that produces electricity.

At that point, the iron beads are now partially rusted again—that is, they have oxygen attached—and they’re returned to the first reactor to react with more coal. It’s this recycling that gives “looping” techniques their name.

Because carbon dioxide separation occurs essentially as part of the combustion process, “the ‘capture’ energy requirements are almost negligible,” and far less than amine scrubbing, Fan said. That could dramatically lower the cost, he added.

Coal-direct chemical looping has another advantage over burning coal, Fan said. Iron burns at 2,000°F, far lower than the 4,500°F needed to burn coal, and at this lower temperature nitrogen in the air does not form nitrogen oxides.

That means that compared with flue gas from burning coal, levels of nitrogen oxides are much lower in the flue gas, which means “there’s much less to scrub,” Fan said.

In its recent run, Ohio State’s combustion unit ran for 203 continuous hours, burned all the coal used, and while capturing 99 percent of the carbon dioxide produced by the reaction. This represents the “longest integrated operation of chemical looping technology anywhere in the world to date,” according to a press release from the Department of Energy, which helped fund the work through the agency’s Carbon Capture Program.

The unit produced 25 kilowatts of thermal energy, which in a power plant would have been used to produce electricity.

Meanwhile, DOE is building a six-story-tall, 250 kW pilot plant at its National Carbon Capture Center in Wilsonville, Alabama to test a related carbon-capture technology Fan’s team developed called syngas chemical looping. It’s a similar process, except that the coal is converted to syngas–a mix of carbon monoxide, methane and other gases–then the syngas reacts with the iron.

“This is a reactor that would allow you to generate electricity, chemicals, or carbon dioxide cleanly by its nature, rather than do a retrofit” of an existing coal-fired power plant, said Karma Sawyer of ARPA-E, who directs the agency’s Innovative Materials and Processes for Advanced Carbon Capture Technologies (IMPACCT) program, which is helping fund the Alabama test.

The Alabama pilot plant will be the first to test the syngas chemical looping technology outside of a laboratory setting, Brickett said. The $14 million project is being funded by ARPA-E and by more than half a dozen companies that make technologies used in coal-fired power plants.

Given looming emissions regulations that could shutter coal-fired power plants, “it behooves these companies to move along technology that will enable coal to continue to be used in the United States,” Brickett said.

That said, syngas chemical looping may be as good a bet as any. The Alabama pilot, Sawyer said, is “testing out what coal plants of the future will look like.”.