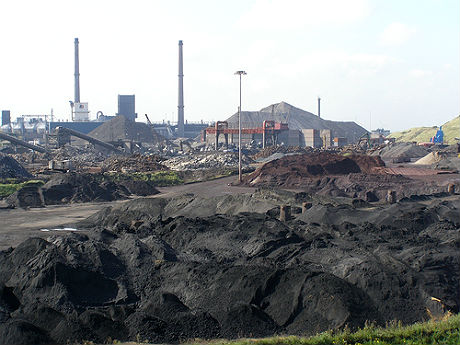 Coal and iron ore piles outside a steel mill in the Netherlands. (Photo by Jules Stoop via Creative Commons)

Cheap natural gas is decimating demand for coal used in power plants — which accounts for the great majority of coal production. But coal is also crucial to other industries including steel, cement and even plastics.

Natural gas is also affecting such non-power roles of coal, but the full extent remains to be seen.

In 2012 coal use in power plants was expected to fall below 900 million short tons for the first time since 1996, according to the U.S. Energy Information Administration (EIA), from more than a billion short tons burned in 2008.

After electricity production, coal’s second most prominent use is as a central component in making steel.

The coal used in steel production is referred to as “metallurgical,” with less sulfur and phosphorus and able to withstand higher temperatures than the “steam” or “thermal” coal used for power plants. Metallurgical coal is significantly more expensive than steam coal, and in the U.S. it is mined primarily in Appalachia.

Metallurgical coal is turned into dense, carbon-intensive coke by baking it to 2,000°F in low-oxygen ovens. The coke is combined with iron ore in giant blast furnaces to produce pig iron. Pig iron is basically a precursor to steel: excess carbon is removed and other elements are added to give steel different properties like strength or flexibility. The blast furnaces can be powered by either type of coal.

There are steel production processes that don’t depend on coal, and they could become increasingly popular because of low natural gas prices. A process called “direct reduction” uses natural gas rather than coke and blast furnaces to produce “Direct Reduced Iron (DRI),” which can be substituted for pig iron.

Lawrence Kavanagh is president of the Steel Market Development Institute, a business unit of American Iron and Steel Institute. He said that the institute had previously undertaken a long-term project developing technology to use hydrogen rather than coal to make molten iron; but now they are shifting their focus to replacing coal with natural gas.

Compared to hydrogen, natural gas “will give us a reduction in emissions, and it does not have to rely on a whole new infrastructure for hydrogen being built,” said Kavanagh. “We have the infrastructure for natural gas and the natural gas reserves are now available. It’s causing steel companies to consider what current technologies they will apply, and it causes us to reconsider future research possibilities.

“It’s a very dynamic and important factor in our industry.”

Kavanagh noted that Nucor Steel, one of the country’s largest producers, has invested about $750 million in a new DRI plant in Louisiana. Kobe Steel, which sells products to DRI plants, says global production of iron using the DRI process has skyrocketed from around 800,000 tons per year in 1970 to around 55 million tons per year in 2005.

Kavanagh noted that energy accounts for a significant portion of a steel mill’s costs, as much as 20 percent or more. U.S. steel mills have reduced their energy use by about 30 percent since the early 1990s, Kavanagh said, and are among the most energy-efficient in the world.

The outlook for metallurgical coal

Producers of steam coal are hoping for a boom in exports to help make up for declining domestic demand; and they are trying to lay the groundwork for new rail lines and export terminals in the Pacific Northwest to facilitate shipping to China.

Meanwhile, the metallurgical coal market survived the closing of many American steel mills in decades past, in part because it is already widely exported.

The Energy Information Administration says that about three times as much metallurgical coal is exported as is used in the U.S.; with about 70 million tons exported annually in 2011 and 2012, according to the mining association.

Brazil is the leading buyer of such coal, with demand in Poland, Turkey, Ukraine, China, India, Japan, the Netherlands and South Korea also increasing. The U.S. is the third-largest global producer of metallurgical coal, according to the mining association, behind China and Australia.

“Demand for metallurgical coal has been strong in Asia,” said Popovitch. “China, for example, consumes about 60 percent of world met coal. That trend is expected to continue as developing countries continue to industrialize.”

Many consider coal crucial to making cement, which is a component of concrete. Pulverized coal is burned to heat kilns up to 2,600°F to turn ingredients including limestone, silica and alumina into cement. The process is coal-intensive: the World Coal Association says that a pound of coal is needed for each 2 pounds of cement produced.

Cement producers are also seeking alternatives to coal. The Portland Cement Association’s website notes that given the high temperature of the kilns, they can efficiently burn a wide range of fuels including plants, tires, paper, plastics and sawdust.

Cement plants can run on natural gas, but the way natural gas burns means that the plants must be bigger and hence lose more heat – making them less efficient. Chemist and consultant David Gossman wrote in a December 2011 online commentary that environmental activists pushing cement plants to switch to natural gas are misguided.

Coal in other forms: from blankets to bikes

Unbeknownst to most people, byproducts of coal or compounds derived from coal are used in a wide range of everyday products including dyes, mouthwash, fleece textiles, carbon fiber tennis rackets and bikes, lip balm and anti-dandruff shampoo.

Silica, which is found in coal, can be used for everything from computer chips to novelty bracelets. Chemicals extracted from coal are used in making batteries and electronics. Both steam and metallurgical coal can typically be used for such end products, though the relative cost and efficiency varies depending on different factors.

Coal ash that is a byproduct of burning coal in power plants is also an ingredient in many things people come in contact with every day. It is used in roofing shingles, paint and stucco; and farmers often use it on fields to condition soil and improve drainage.

Coal ash is also central to making concrete, where it can be used as an alternative to cement. The residue from pollution controls that remove sulfur dioxide at coal-fired power plants is also used for purposes including fertilizer and drywall.

American Coal Council spokesman Jason Hayes said that the closing of power plants will likely not mean a shortage of coal ash. More worrisome for the industry, he said, are the still-pending new federal rules on coal ash disposal.

Environmental and citizens groups want coal ash designated a hazardous waste, which would mean stricter disposal requirements. Currently coal ash can be stored in unlined quarries and pits, and data collected by the U.S. EPA, state agencies and environmental groups shows groundwater has been contaminated in numerous locations nationwide. Representatives of the coal and concrete industries say a hazardous waste designation would frighten people and mean they would not want it in things like highways and roofs, even if it presents no threat when inert in such materials.

Hayes said the closing of mines because of the drop in steam coal demand should not significantly affect the use of coal to make plastics, batteries or other such products.

“In the last five years we’ve gone from approximately one billion tons mined per year to around 900 million,” he said. “The mines that were on the edge are the first ones to go. It is impacting supply, that’s economics 101. It could potentially impact some (other uses of coal). But when you’re still producing 900 million tons per year you still have a lot of potential.”