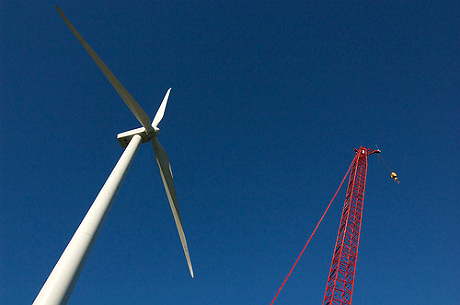 Not coincidentally, the conservative state legislature has rejected state renewable energy mandates that have spurred wind development elsewhere in the Midwest.

But a wind-energy coalition thinks they’ve found another way to expand renewable energy in the state, without government mandates.

The Indiana Power of Wind coalition is pushing legislation that would allow wind and natural gas to compete directly with coal on the basis of price when utilities procure new generation. Under the plan, when a utility needs new generation capacity, an independent entity would evaluate all possible sources of new electricity generation, including renewables.

“We want competitive procurement for all forms of energy,” Tony Samuel, a lobbyist for the organization, tells Midwest Energy News. “That speaks to our confidence that wind will be competitive,” he added.

Getting a foot in the door

For years, renewable energy advocates have argued for a state renewable energy standard in Indiana, to no avail. In 2011, legislators passed and Gov. Mitch Daniels signed a bill establishing a voluntary goal of 10 percent renewables by 2025.

But in the year since the law went into effect, none of the state’s utilities have signed up to participate, said Shannelle Montana of EDF Renewable Energy, a San Diego-based multinational wind and solar developer.

Indiana state law makes it easy for the utilities to request new generation, then fulfill those requests themselves by building or expanding coal-fired power plants.

“What we’re seeing is that utilities are specifying they want coal or natural gas [for new generation],” Montana said. “Or, they’re saying we want very traditional baseload structure, which for most companies means coal.”

This excludes newer ways of providing baseload power, including using a hybrid of new natural gas generation and wind, or using wind hedged with buys from the grid, Montana said.

The law also grants those utilities a healthy profit margin on both capital expenses for a new power plant and fuel costs, with that profit paid by the state’s ratepayers, said Kerwin Olson, executive director of the Citizens Action Coalition, an Indianapolis-based ratepayer and environmental advocacy group.

Meanwhile, the state’s electricity costs have risen as the financial risks associated with burning coal have increased. In 2003, Indiana’s electricity costs were fifth lowest in the nation. In 2012, they were 23rd lowest. At the same time, wind’s costs are becoming increasingly competitive with fossil fuels.

Legislators around the state knew that new wind farms and wind-turbine manufacturing means economic development for rural areas that are hungry for good jobs, Montana said.

“We got a lot of feedback from legislators,” Montana said. “They said, ‘We want wind. We want the business, we want the megawatts, we want the income for farmers.’ They were positive about wind. But they just didn’t want the [mandatory] renewable energy standards,” she said.

“We knew Indiana was not a state that latches onto things that are mandated,” Montana said. “We know that the traditional models—the RES or RPS—were just not going to apply there. So we started thinking outside the box.”

Under the plan promoted by the wind developers, the state would establish a new, independent administrator in charge of procuring new generation. Rather than serving as judge, jury and executioner, the utilities would forward their requests for new generation to the administrator.

The administrator would then look at the utility’s need and issue a request for proposals (RFP). That RFP would weigh pricing, fuel price volatility, reliability, and economic development to local communities, as well as other factors, such as the background and experience of potential vendors, Montana said.

In addition, both utilities and wind developers would be bound by the prices they put forward, Montana said.

Currently, when utilities building a new power plant in the state incur overruns, they can go back to the Indiana Utility Regulatory Commission and ask them to approve a rate increase. For several years, for example, Duke Energy has been pushing for more than $2.5 billion from ratepayers to pay for cost overruns at the new coal-fired power plant it’s building in Edwardsport, Indiana.

Renewable energy developers in Indiana have no such fallback. “We can’t go back to the IURC and say, oops, we overran that cost,” Montana said.

Under current Indiana law, utilities actually have a disincentive to buy and operate a wind farm because they would not receive a guaranteed rate of recovery for their capital expenditures. This provision is another tactic that would help wind energy compete in the state, Montana explained.

“More than anything else, this [legislation] would allow wind to compete with natural gas and coal on its price,” she said.

To make the plan more palatable for legislators who prefer a lean state government, the new administrator for procurement would be a third-party contractor, rather than a new government official. The winning bidder would pay for the administrator and other costs of procurement.

But the biggest selling point for the wind companies, Montana said, is price. Electricity prices in Indiana “have been going up significantly. This will drive rates down because we’re going to have to compete with each other based solely or mostly on price.”

The state’s environmental groups have been peripheral to this legislation, but they are natural allies in that they want more clean energy, Montana said.

How much support the proposal will get remains an open question.

During the current legislative session, the utilities are pushing Indiana Senate bill 560, which Olson calls a “Christmas-tree” bill that has all sorts of provisions that the utilities favor. The wind-industry group may or may not lobby a legislator to amend that bill, Samuels said.

Overall the wind group’s legislative strategy remains fluid and flexible, and discussions with all the major players are ongoing, he said.

For legislators who want economic development and believe in free-market economics, Montana maintained, “it’s a hard bill to vote against.”