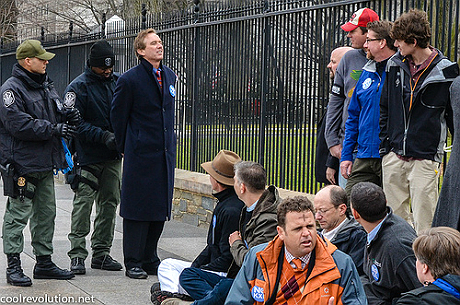 Robert F. Kennedy, Jr. is arrested in front of the White House Wednesday during a Keystone XL protest. (Photo by cool revolution via Creative Commons)

Detroit resident Rhonda Anderson is heading to Washington D.C. to join thousands of people from across the nation in a protest Sunday calling on President Obama to take action on climate change, including by rejecting TransCanada’s proposed Keystone XL pipeline.

Anderson opposes Keystone XL, which would carry Canadian tar sands oil to the Gulf Coast, but she says other Midwesterners are already being impacted in other ways by the industry.

Residents who live near pipelines and refineries already handling tar sands say their experiences raise red flags about Keystone XL; and they are also calling for increased regulatory scrutiny for existing tar sands pipelines and infrastructure.

“There are instances of tar sands projects affecting communities all across the country,” said Kady McFadden, an associate organizer for the Sierra Club’s Beyond Coal campaign. “The Keystone we see as the biggest offender, which is why so much attention has been given to it, but we’re also giving (Sunday’s event) a local focus and face, saying these are places tar sands are already being brought and already having effects.”

The national campaign against Keystone XL has been largely pegged to climate concerns, and the climate group 350.org has been a key organizer of protests. The founder of that organization, Bill McKibben, was arrested on Wednesday at a protest at the White House, along with other prominent activists.

There is debate about how the life-cycle carbon dioxide emissions of tar sands-derived fuel compare to other global oil deposits. NASA scientist James Hansen has said releasing all of the carbon contained in the reserves would be “game over” for the climate. A recent analysis by the business information group IHS pegged the difference between carbon emissions from tar sands and other types of oil at nine percent.

The anti-Keystone movement has also focused on the local impacts along the pipeline route, including possible contamination of Nebraska’s Ogallala aquifer, destruction of farmland and disruption of sensitive habitat for migratory birds and other wildlife.

The Sierra Club and 350.org are members of RE-AMP, which also publishes Midwest Energy News.

A question of environmental justice

Anderson grew up near Detroit’s Marathon Petroleum Corp. refinery, which is in the midst of a $2.2 billion expansion to process tar sands. She said residents worry about ongoing health impacts from refinery emissions, as well as the risk of accidents or pipeline spills of the type that dumped more than 800,000 gallons of crude into the Kalamazoo River in 2010.

She noted that the refinery’s expansion has also been devastating for nearby communities including Oakwood Heights, where Marathon is buying up and demolishing more than 400 homes.

“They tear them down as they buy, so the area looks horrible right now,” said Anderson, an organizer for the Sierra Club. “Holdouts are there too – residents are furious, saying they will not sell their homes, they’re elderly now, why should they be forced into getting a new mortgage when their homes are already paid for?”

Anderson says the refinery, along with other heavy industry concentrated in the area represents an environmental justice issue for largely low-income, African American residents.

“These industries happen to be in communities of color and low-income communities,” said Anderson, noting that at least three other residents who live in the shadow of the refinery are hoping to go to Washington for the protest, though they are worried buses may be sold out.

“Bringing in clean energy and renewable energy are the things that can change these communities,” she says.

Northwest Indiana also on the bus

In northwest Indiana as in Detroit, residents face the choice between accepting oil company offers for their homes and continuing to live beside expanding tar sands refineries. BP wants to buy and demolish houses in the historic Marktown enclave near its Whiting, Indiana refinery. Many residents plan to fight to stay even as pollution is a major concern.

Steve Kozel, president of the Calumet Project citizens group in northwest Indiana, is also traveling to Washington. The Calumet Project worked with the California-based organization Global Community Monitor to secure an agreement with BP wherein a real-time fence-line emissions monitoring system will be installed once the expansion is completed.

Kozel said he will be less concerned about emissions once the system is in place, but he and other residents still worry about the pipelines bringing tar sands to the refinery.

“Look at all the spills we’ve had in surrounding areas,” he said. “With these older pipes, they’re going to need the new pipes built, but we’d rather not see pipes at all.”

Kozel said citizens also want more information about how Keystone XL would economically impact U.S. gas prices and other refineries like BP Whiting, including how much of the tar sands shipped down the Keystone would ultimately be exported. Studies and comments by pipeline company executives have previously indicated that the Keystone XL could actually mean less tar sands oil going to Midwest refineries and higher gas prices in the Midwest.

Midwestern activists are also planning to use Sunday’s march to oppose an ongoing expansion of tar sands pipeline networks owned by another Canadian company, Enbridge, whose Line 6B in Michigan caused the Kalamazoo River spill.

In order to ship more tar sands to Midwestern and northeastern refineries – and possibly to northeastern ports – Enbridge is replacing and laying new pipeline along hundreds of miles in the Midwest and northeast. The initiative is part of a larger $6.3 billion expansion across the U.S. and Canada.

In late January, state regulators granted Enbridge permission to replace 160 miles of the existing pipeline through southwest Michigan. Plans call for doubling the capacity to 500,000 barrels a day for Line 6B, which serves the Detroit Marathon refinery along with refineries in Toledo and Sarnia, Ontario.

Indiana environmental groups have demanded the state require stringent monitoring and other safeguards for the portion of Line 6B that skirts the southern edge of Lake Michigan, including crossing four rivers less than 20 miles from their confluence with Lake Michigan.

Chris Wahmhoff, a Kalamazoo resident who spends up to 20 hours a week researching and organizing around the pipeline issues, says Enbridge has been unfairly secretive about its expansion plans and about potential problems on its pipelines.

“They’re not being completely honest – they’re not usually very honest until they have to be.”

Tar sands opponents don’t want to see the oil extracted regardless of where it goes; but they say the pipeline issues compound concerns that there is not adequate oversight or democracy regarding the industry.