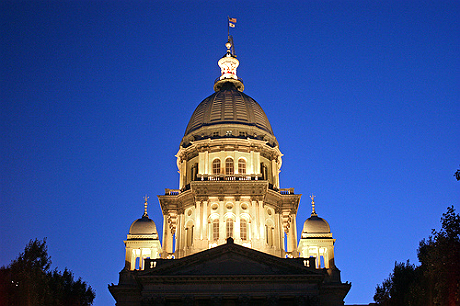 Illinois legislators are expected to introduce a bill in coming days or weeks that would regulate hydraulic fracturing in the state.

Known as Democratic Rep. John Bradley’s bill, it is expected to be shaped by months of discussions that have taken place among environmental and industry leaders and legislators. Last year, legislation that started with support from both environmental and industry groups died after undergoing various permutations, including the addition of a two-year fracking moratorium.

“We’re  85 percent there in terms of where the environmental groups, industry and the Attorney General’s office want it to be,” said Tom Wolf, executive director of the Energy Council of the Illinois Chamber of Commerce. “But the last 15 percent can sometimes be very difficult.”

On Feb. 6 Illinois state senator Mattie Hunter, from Chicago, introduced a bill like last year’s calling for a two-year moratorium to allow further study of the possible impacts of fracking the state’s New Albany Shale for natural gas. Experts said Hunter’s bill, an amendment to the Illinois Oil and Gas Act, is unlikely to pass given the failure of last year’s moratorium bill and the fact that industry and environmental leaders have been involved in crafting the Bradley bill.

Gas companies have leased about a half million acres and spent at least $100 million preparing for exploration in central and southern Illinois. But they have been slow to proceed while there is uncertainty over regulations, and it is still unknown whether the shale deposits will prove commercially viable.

“There’s a de facto moratorium in Illinois” until regulations are passed, Wolf said. “Companies aren’t willing to do test wells until they know what the regulatory landscape will look like. The Albany Shale has promise, but it’s not a guaranteed success.”

Some landowners and national advocacy groups say they will only be satisfied with an outright ban on fracking. Other environmental leaders say a regulatory bill is necessary.

“We support the moratorium – taking time to develop strong safeguards and analyze the new scientific information becoming available is definitely smart policy,” said Jack Darin, director of the Sierra Club’s Illinois chapter. “At the same time we realize not everyone feels that way, so in the event we’re not able to establish a moratorium we understand we’ve got to get the strongest protections in place that we can. It’s a two-pronged approach.”

“When you have a lot of different interests and people at the table, it’s hard to reach complete consensus on everything,” said Nick Magrisso, policy advocate for the Midwest Program for the Natural Resources Defense Council (NRDC), which has been involved in the regulatory discussions. “But we have reached consensus on a lot of important issues…We are very optimistic that this process has been as successful as we could have envisioned and the protections we’ve been able to advocate have defined a new floor for Illinois and other states to follow.”

The NRDC and Sierra Club are members of RE-AMP, which also publishes Midwest Energy News.

Disposal of contaminated water is one of the prime concerns in fracking, involving both the “flowback” water that–combined with grit and chemicals–is pumped in to fracture shale; and the “produced water” already in the earth that is contaminated by the process.

Those close to the negotiations expect the law to contain requirements that all contaminated water be stored in closed tanks or, in emergency situations, in lined pits.

“Water management is a huge question we want to see addressed,” said Magrisso.

The bill is expected to require companies to make public the chemicals they are using, but it likely will allow them to invoke trade secrets to avoid disclosure–a common practice nationwide.

The bill introduced last year, which contained language from the American Legislative Exchange Council, was controversial in part because it narrowly defined the parties with standing to sue to challenge trade secret privileges (an issue that’s also come up in Ohio). This year’s bill may allow a wider range of people to sue to force disclosure.

Wolf said disclosure is among the areas where companies are more willing to work with environmental groups than they were in the past.

“In the big picture, the industry has matured and changed over the years, it’s not the industry it was in 2005,” Wolf said. He said environmental groups have also become more knowledgeable about the technology and the improvements that have been made.

The bill is also expected to mandate baseline water testing, making it easier to determine if water is polluted by fracking. And the bill is expected to include a presumption of liability that fracking has caused any pollution that occurs.

“Without a presumption, a fracking company could suggest all sorts of explanations for contamination that turns up near their operations–they could say space aliens did it–and enforcement authorities would be stuck having to try to prove none of them were true,” Magrisso said.

The bill is also expected to include strong provisions for citizen enforcement, meaning citizens who suspect violations can sue to spur government agencies to step in.

Jessica Fujan, a Midwest organizer for the national group Food and Water Watch, said the group is opposed to fracking across the board. They have worked with Illinois Citizen Action to call for a statewide ban on fracking.

“We think regulating fracking is an impossibility and a joke,” Fujan said. “Our stance is that there is no such thing as safe fracking–pollution and damage to underground water sources cannot be undone. We are adamant that any moratorium present no pathway to fracking.”

She added that the group is “actively opposed” to the regulatory bill, though she believes its crafters include “people with good intentions.”

The group SAFE (Southern Illinois Against Fracturing our Environment) is made up of landowners and other residents in areas where companies have already leased large swaths of farmland and forest. SAFE executive director Annette McMichael, who has been approached by “landmen” seeking to lease her property, said the group supports the moratorium bill.

On March 1 all three groups will hold a town meeting in Carbondale. McMichael said  SAFE members have scheduled several lobbying days in early March, and they plan to hire professional lobbyists. She said she knows some environmental leaders say a moratorium bill “will never pass,” but she sees that as a “defeatist attitude.”

“With experienced people who know how to make this happen, I think we have–I don’t want to say a 50-50 chance, but–an opportunity well worth pursuing,” she said.

She added that SAFE will “never support anything that doesn’t have a moratorium.” And she is upset that SAFE was not involved in the discussions that are expected to lead to the regulatory bill.

“We have not been invited to participate at all,” she said. “We in southern Illinois feel like we should have a voice because we will be most affected.”

States fending for themselves

Without new industry-specific legislation, state agencies like the Illinois Environmental Protection Agency and the Department of Natural Resources don’t have the power to adequately monitor and regulate fracking, environmental leaders say. That’s because the agencies get much of their authority under federal laws which don’t apply to the oil and gas industry or hydraulic fracturing.

As the Environmental Working Group explained in a 2009 report, the oil and gas industries have exemptions from federal laws including the Safe Drinking Water Act, the Clean Water Act and the Resource Conservation and Recovery Act (RCRA). The Energy Policy Act of 2005 specifically excluded hydraulic fracturing from provisions of the Safe Drinking Water Act related to underground injection of fluids.

“No other industry would be able to come to Illinois and threaten our water and our communities like this,” said Darin. “We’ve got to have adequate national regulation, but we can’t really have that until Congress closes the loopholes created in 2005. I don’t think anyone expects the U.S. House to do that anytime soon, so states are on their own, facing these threats as best they can.”