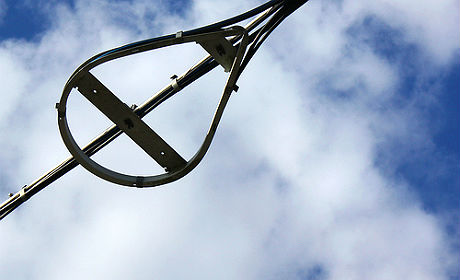 As the country rebuilds its aging transmission system, spending more than $14 billion this year alone, there’s a looming, unanswered question: who gets the bill?

Federal regulators are attempting to equitably distribute the costs, but a recent complaint by an Iowa utility shows that the issue is far from settled.

Interstate Power & Light Co. says its customers are unfairly shouldering the costs of connecting wind farms to the electricity grid. The utility, which is a subsidiary of Alliant Energy, wants federal regulators to spread the cost of local interconnection projects, which mostly benefit other utilities that import wind power, it says.

“The fundamental question here is: who pays?” said Jim Hoecker, general counsel for WIRES, a nonprofit that represents the electric transmission industry.

Interstate Power & Light filed its complaint in September. It alleges that its customers “bear an inordinate and burdensome portion of the cost” — about $32 million between 2008 and 2011 — for generator interconnection projects in its territory.

The utility serves about 495,000 electric customers in Iowa and another 50,000 in southern Minnesota. It’s a wind-rich territory that’s attracted lots of wind projects, many of which require local grid upgrades to support.

As for the benefits of those projects?

The utility wants FERC to investigate the “justness and reasonableness” of the cost allocation, and, if necessary, to establish a schedule for refunding payments, which will reach $170 million by 2016, it says.

ITC Midwest counters that Interstate Power & Light is exaggerating the costs and ignoring the benefits. It says the utility’s claims aren’t backed up by data or studies, and it’s asking FERC to dismiss the complaint.

“[Interstate Power & Light] must do more than merely make bald assertions in order to meet its burden of proof,” ITC Midwest said in its answer, submitted to FERC in October.

ITC Midwest says the utility is benefiting from lower prices and better reliability. Interstate Power & Light acknowledges both, but credits the economic downturn and other, non-interconnection projects for the improvements.

Who gets the bill

When ITC Midwest acquired the transmission system, it sought permission from regulators to pass the full cost of certain interconnection projects onto utilities that purchase power from the grid. The Midwest’s grid operator, MISO, and FERC approved in 2008.

FERC’s approval of that change, however, didn’t apply to ITC Midwest and two other MISO areas run by independent transmission companies, which can still pass costs directly to utilities instead of billing new generators.

The costs of large, interstate transmission lines (known in MISO terms as “multi-value projects”) are spread widely across a region. Wind farms and other generators typically pay the full cost of connecting their projects to the nearest substation. What’s in dispute in this case is who pays for changes and upgrades that are often needed nearby in order to accommodate the new power source coming online.

An analogy: If a football team builds a stadium a mile from the nearest freeway, who pays for adding lanes and traffic signals to all of local roads that will be overwhelmed with new traffic on game days? Is it the city? The team? The fans?

“Who pays can become a pretty complicated equation, and in the electric business, we are always arguing about that,” says Hoecker. Under the stadium analogy, it could be that the project diverts traffic from other, more congested roads, he says.

Or it could be that the roads were already due for work, which is the argument ITC Midwest and its supporters are making.

“It’s like that saying, the straw that broke the camel’s back,” said Natalie McIntire, a consultant for Wind on the Wires, which represents the wind industry and environmental groups (and is a member of RE-AMP, which also publishes Midwest Energy News).

“The problem … is that this is a big, broadly based social good [in which] frequently it’s hard to trace the benefits of particular investments to a specific customer or group of customers,” Hoecker said. “It’s a very difficult thing to do.”

Since 2008, ITC Midwest has reconstructed nearly 100 miles of transmission lines as part of 23 interconnection projects, mostly wind farms. The average age of the lines it replaced was approximately 51 years.

One project was a wind farm built for Interstate Power & Light, but the majority are helping meet demand for renewable power in neighboring states. As of September, ITC Midwest had 3,442 MW of projects in its interconnection queue, while the area’s load is only 2,911 MW.

The transmission company says the cost to Interstate’s customers has been “minimal” — about 17 cents a month for the average residential customer. It also notes that Interstate didn’t object five years ago when the cost allocation was proposed and approved by FERC.

FERC noted in that decision that “transmission customers can benefit from the increased amount of generation in their pricing zone even if that new generation capacity is not sold to them.”

“What’s changed since 2007 is now we have some experience with this cost allocation methodology, and we’ve been able to see the effects from it,” Myhre said. “We’ve seen that the magnitude of costs that it’s putting back on our customers.”

Interstate Power & Light’s complaint is supported by Minnesota utility regulators and the Iowa Consumers Coalition, a group of large energy customers, which want ITC Midwest to shift most of the cost to generators like the rest of MISO.

“There is no reasonable justification to support this different treatment of IPL and its customers,” the Minnesota Public Utilities Commission and Minnesota Department of Commerce said in comments filed with FERC.

Wind on the Wires, the American Wind Energy Association and several renewable energy companies have filed comments asking FERC to dismiss Interstate’s complaint and not change the cost allocation.

Eric Guelker, Alliant Energy’s director of transmission policy and strategy, said they want to pay an amount for transmission that’s represenative of the benefits.

“The 100 percent all going to IPL customers, that’s an extreme,” Guekler said. “But to say that none of these costs provide any benefit, that wouldn’t be right either.