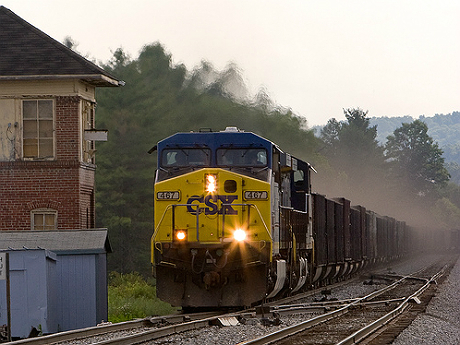 Dust blows from a coal train in Maryland. (Photo by paulv2c via Creative Commons)

For years, many miners who breathed in too much coal dust got sick and died of black lung disease.

But coal dust can cause serious health problems above ground as well, according to studies by a public-health researcher presented in Boston Sunday at the annual conference of the American Association for the Advancement of Science.

People who live near mountain-removal mines are especially at risk, but so are neighbors of other surface mines and anyone who’s exposed to blowing dust from uncovered piles of crushed or pulverized coal, said Melissa Ahern of Washington State University. And unless precautions are taken, wind can whip coal dust from power plants, shipping facilities, trains, trucks or factories.

About six years ago, Ahern was visiting a friend in southern West Virginia, in an area where mountaintop removal coal mining was going strong. “The people there said, ‘We used to be able to look out the window and then, lo and behold, the beautiful mountain wasn’t there anymore,’” she recalled.

Nor was it just the vanished scenery that upset the locals. A constant stream of trucks rolled through the area, carrying uncovered coal. Ahern saw hazy air, water that ran black out of some spigots, and black dust all over people’s furniture. Regular explosions, she was told, were a fact of life.

“Overburden,” formerly the rock and soil that made up the mountain, was pushed into valleys, burying streams and leaching arsenic and heavy metals into the water. Land denuded during mountaintop mining sometimes flooded more often and more severely.

Property values had plummeted, costing the locals thousands of dollars, which was keeping them from moving out.

“You could see the stress levels they were living in,” Ahern recalled. It was “really startling,” she recalls.

What the research says

To find out whether above-ground coal dust could harm human health, Ahern looked into the public-health literature, then combined three sets of studies.

One set had documented the presence of known toxins in coal dust, including arsenic, mercury, and other heavy metals.

A set of toxicological studies had identified the health impacts of these chemical toxins. They’d also shown that soot from diesel exhaust, which is generated by trucks and trains moving the coal, is also toxic, and it can exacerbate lung and cardiovascular disease.

But no one had done studies to show whether people living in coal-mining communities were more likely to die young or get particular diseases, Ahern discovered.

Ahern decided to help do them herself. She teamed up with Mike Hendryx of West Virginia University, a public-health researcher who focuses on health in Appalachian coal-mining towns, to compare the health of people near mountaintop mines with people in nonmining towns.

Since 2007, the two have published a series of studies showing that coal dust is dangerous. By comparing mortality in central Appalachian counties with surface mining or no surface mining, they found that people in mining counties were significantly more likely to die younger.

Then, in 2011 they reported in Environmental Research, a peer-reviewed journal, that people in mountaintop mining areas had a 26 percent higher rate of low-birth-weight babies than those in nonmining areas. Such babies are at risk for a lifetime of health problems.

The researchers had come to that conclusion by studying records of 1.8 million births throughout central Appalachia.

And last year, Ahern and Hendryx reported in the Journal of Environmental and Occupational Science that people suffer significantly higher rates of leukemia, and lung, colon and bladder cancer in counties where mountaintop mining is occurring.

“I think the evidence we’ve amassed so far from this triangulation is compelling,” Ahern said. Regular exposure to coal dust, she said, is “extremely dangerous.”

“There’s no question that this work is correct,” Dan Kammen, who directs the Renewable and Appropriate Energy Laboratory at the University of California, Berkeley, said in an email. “We are seeing significant health (and ecological) impacts in coal-intensive regions.”

“Ahern’s results make it clear that in specific areas, the costs should be higher still,” Kammen said.

Human health costs should be weighed heavily when developing policies governing the mining, transport and use of coal, Kammen said. “It is vital, pure and simple,” he concluded.

And the human health effects will only become more important as coal companies turn more and more to surface mines rather than underground mines, Ahern said.

“As coal has moved from underground to the surface, the mining gets dirtier and more disruptive, and the exposure opportunities have increased,” she said.

“To me the big message is that we have net declining energy and we have to go to dirtier sources,” Ahern said. “Those sources have a cost. They have more environmental effects and more effects on human health.”