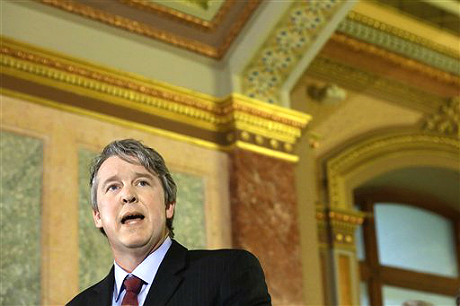 The legislation — called the “Bradley bill” after its sponsor, Rep. John Bradley — included nearly all the provisions that leaders of major environmental groups had expected after months of discussions with industry, legislators and the state’s attorney general.

“But there’s a caveat when saying (a fracking bill) is the ‘strongest in the nation,’” said Jennifer Cassel, a staff attorney with the Environmental Law and Policy Center (ELPC). “That’s not saying all that much – we don’t think the floor is high enough. It doesn’t mean we’re doing the most protective standards that could possibly be done.”

A representative of the oil and gas industry also described the bill as “not perfect by any means.”

Kyna Legner, writing for Energy in Depth, a publication of the Independent Petroleum Association of America, said the bill “includes significant new requirements for hydraulic fracturing that could serve as a barrier to future operations.” The legislation does, however, avoid a moratorium, which she said “would be far more destructive.”

Meanwhile, opponents of fracking – including many area residents who say they were not included in the discussions – oppose a regulatory bill and continue to demand a moratorium or ban.

Also, as Legner noted, the bill is “a long way from becoming law, and much can change as the legislative process unfolds.”

The Illinois bill, HB2615, mandates baseline water testing before fracking starts, and water monitoring thereafter. If contamination is found, it is presumed that the industry is liable.

“It’s the obligation of the industry to show that they didn’t cause that contamination and not the reverse,” said Cassel. “Water monitoring obviously plays very much into that presumption. We’re finding out what’s in the water sources before we start fracking. These are pieces of information that, shockingly, are absent in other states.”

The bill also bans the use of diesel fuel as a fracking agent.

“Diesel has no place in fracking, it contains carcinogenic compounds and it can make its way into the groundwater,” said Natural Resources Defense Council (NRDC) senior attorney Ann Alexander.

Companies would be required to disclose to state officials the concentrations and names of chemicals they will use before they begin fracking; however companies can claim trade-secret privileges to prevent that information from being made public.

A controversial Illinois bill introduced last year would have severely limited the number of people with official standing to challenge the invoking of trade secrets. Under the current proposal, anyone can challenge companies to disclose chemicals.

Cassel also highlighted a requirement that has gotten little attention: a mandate that companies plug nearby abandoned wells to avoid fracking-contaminated water flowing up through them, as has happened in other locations.

The NRDC and ELPC are members of RE-AMP, which also publishes Midwest Energy News.

The Illinois bill goes further than federal clean air laws in limiting the release and flaring of natural gas during operations, important for reducing carbon dioxide and other emissions.

Federal law limits gas emissions during the phase where the shale is actually fractured, and a “whoosh” of gas is emitted from the ground, in Alexander’s words. The Illinois bill extends gas emissions limits to the production phase of fracking, where lower amounts of gas can escape along with the gas or oil actually being collected.

The state bill also requires that if gas is flared, the company must prove it is burning off all the volatile organic compounds (VOCs) that otherwise could pose a public health risk. Alexander said federal law has no such requirements.

The bill also includes insurance and bonding requirements that Alexander described as “adequate.” Companies must put up $50,000 bonds for each permit or a $500,000 blanket bond to cover multiple permits. The bonds are meant to cover problems until the well is officially plugged and abandoned.

Cassel said the bill’s public participation and transparency requirements are strong. Permits must include specific information on where the company will get the water it uses to frack, and the permits must specify measures taken to reduce water usage.

Within five days of receiving a permit application, the state Department of Natural Resources must post on its website the application and notice of a 30-day public comment period. The department also must mail notices to all landowners within 1,500 feet of the proposed well site.

The bill includes fairly specific best practice requirements for well design, construction and monitoring, including procedures and standards mandating how the cement in the well is pumped in and how much pressure it must be able to withstand. And the bill requires any surrounding fresh water and “flow zones” be completely isolated from the well.

The bill includes the vague mandate that fracking “shall not pose a significant risk to public health, life, property, aquatic life or wildlife.”

But many Illinois residents who live in the areas where fracking is proposed say they don’t believe regulations can prevent such harm. Fracking opponent Richard Fedder said in an email to Midwest Energy News that the proposed bill may be “better than any other state at holding the industry accountable AFTER our water is poisoned.”

“But environmentalists, and just plain ordinary people, would prefer that their water not be poisoned in the first place,” he said. “Or even simpler — We don’t want our land to dry up because this giant industry sucks up all our water.”

Residents and environmental leaders involved in the regulatory negotiations note that the bill does not address problems under the existing state Oil and Gas Act — for example, the “forced pooling” policy which means individual residents can be forced to lease their mineral rights if those rights are part of a “pool” of oil or gas co-owned by others.

The bill also does not allow towns or other local governing bodies to place their own restrictions or bans on fracking. Alexander said such local control was discussed early in the negotiations, but the concept was tabled.

The group Southern Illinoisans Against Fracturing our Environment (SAFE) and other anti-fracking groups support a bill introduced earlier this month by state senator Mattie Hunter (D-Chicago) that would put a moratorium on fracking. There is an active grassroots anti-fracking movement in Chicago as well as downstate.

People involved in the negotiations say the regulatory bill has a good chance to pass in its current form, but industry or other interests may push for changes.

“At this point we’re not really willing to tolerate any weakening of this bill,” said Alexander. “This is hard-fought, we have these terms that are not perfect but they’re what we’ve agreed to, and we won’t stand for it being chipped away at. We’re hoping everyone stays on the same page.”