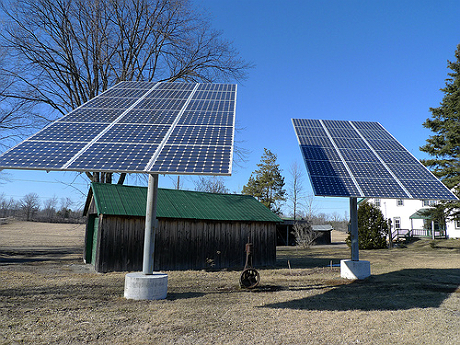 A farm in Ontario, where the owner opted for solar panels over wind turbines. (Photo by spanginator via Creative Commons)

Wind energy companies are getting into the solar game.

An ongoing lull in wind projects and falling solar panel prices has wind companies looking to add solar projects to their portfolios.

In the U.S., 2013 is projected to be a lost year for the wind industry, which added more than 13 gigawatts of capacity in 2012 but could do as little as 3 gigawatts this year in the aftermath of the latest uncertainty over the federal wind production tax credit.

So instead of sitting on their turbines, wind developers are diversifying, hiring solar experts and broadening their portfolios to include photovoltaics.

“I don’t know of a wind company that isn’t at least looking at solar,” says Shanelle Evens Montana, a legislative and regulatory affairs associate for EDF Renewable Energy.

The trend extends throughout the supply chain, from consultants to construction and engineering firms. Some companies are even dropping the word “wind” from their names.

EDF Renewable Energy, a San Diego company with an office in Minneapolis, is developing one of the country’s largest solar-wind hybrid projects in California’s Mojave Desert, pairing a 140-megawatt wind farm with a 143-megawatt solar farm.

Solar is still a relatively small part of EDF’s portfolio — it’s developed less than 300 megawatts of solar compared to more than 3,500 megawatts of wind. But its solar business been growing in recent years with an eye towards the current wind slowdown.

“I think part of it was seeing that [gap],” says Evens Montana. “It was also just seeing positive opportunities.”

A need to diversify

Congress extended the wind production tax credit (PTC) for one year in January, but much of the damage was already done, as uncertainty caused many companies to postpone planning for larger projects. Another factor is the schedule of state renewable mandates — many utilities have already met the early benchmarks.

Those kinds of disruptions have been an unavoidable part of doing business in the renewable energy world, idling industries every few years as incentives come up for renewal.

“I’ve learned over the years we needed to diversify,” says Dan Juhl, a 35-year veteran of the industry who is founder, chairman and CEO of Juhl Wind. “I start planning for the falloff of the PTC the day after they pass it.”

In the past, Juhl Wind diversified its business by adding electrical engineering and operations services for existing wind farms. This time around, it decided to step up its investment in solar and storage technologies.

As much as uncertainty over incentives pushed wind companies to think about other opportunities, the pull of solar power’s rapidly improving economics has been a more important factor.

“The biggest thing was just seeing the dramatic drop in the cost of solar,” says Blake Nixon, president of Geronimo Energy. “We had always had our eyes on entering the solar business once we thought economic viability was within 18 months. Frankly, we were surprised how fast that came up, because costs fell off so fast.”

Earlier this year, the company changed its name from Geronimo Wind and hired a solar professional to build a new solar development unit. It won’t be from scratch, though. That’s because much of its existing expertise easily transfers from wind to solar, Nixon says.

Wind companies that already have in-house skills related to GIS mapping, real estate contracts, and transmission issues, for example, are finding those apply to solar. And the customers are often the same, too.

Most of EDF’s solar projects have been in states like California or New Jersey, where policies have driven early adoption of solar power. Evens Montana sees its Midwest solar business growing as the economics continue to improve.

Geronimo Energy has modest solar goals in 2013. It hopes to install 1 or 2 megawatts by the end of the year, compared to 200 megawatts of wind power. Next year, it could do anywhere between 5 and 100 megawatts, with policy being the big variable, Nixon says.

If the Minnesota legislature approves a solar electricity standard, requiring utilities to get 10 percent of their electricity from solar by 2030, it would drive demand for utility-scale projects in addition to the commercial rooftop ones that Geronimo is currently pursuing.

Juhl Wind, meanwhile, believes smaller-scale solar and storage projects will be a source of growth. The company has developed a product called Solar Bank that combines solar and storage for peak-load management and back-up or off-grid power.

Evens Montana expects most wind developers entering the solar market, especially larger companies, will focus on utility-scale projects, which lines up better with their expertise. The synergy they see is similar to the way wind and solar generation can compliment each other on the grid. The wind can still blow even when the sun isn’t shining, and vice versa. That’s why Nixon and other wind developers are optimistic.

Says Nixon: “We see the solar business going from a very modest piece of our business to a very substantial piece very quickly.”