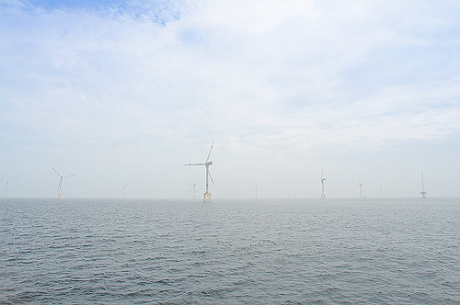 Offshore wind farms, like this one in Denmark, are common in Europe, but the United States has yet to build one. (Photo by Felix Montino via Creative Commons)

When Scandia, a Norwegian wind company, announced its plans to install 200 turbines in Lake Michigan four miles from the tourist town of Ludington, Michigan, in 2009, they likely didn’t anticipate the controversy that would erupt.

After all, the project would be delivering domestically produced renewable energy to replace planet-warming fossil fuels. It would create local jobs installing and operating the turbines. A nearby pumped-hydro facility for storing backup energy sat in the nearby dunes, complete with substations and high-voltage lines they could use to move electricity from their offshore turbines to the grid.

“The developer thought, We’ll build wind farms out in Lake Michigan, hook up in Ludington, and everyone will be delighted,” recalled Arn Boezaart, director of the Michigan Alternative and Renewable Energy Center at Grand Valley State University.

Instead, “they were basically run out of town,” Boezaart recalled.

Residents of this picturesque town were outraged about the prospects of scores of wind turbines ruining their view. Nobody had consulted them. And Michigan, like every other Great Lakes state, lacks even a rudimentary procedure for regulating offshore wind farms, without which there would be little opportunity for public hearings.

A similar brouhaha unfolded over the past decade in Nantucket Sound, off the southern coast of Cape Cod, over a proposed 468 MW wind farm known as Cape Wind. Residents of the area spent nine years fighting the project before the Interior Department approved it in 2010.

Offshore wind farms may be a common sight in European waters, but the United States has yet to build its first. Plans for several East Coast wind farms are moving forward, and construction of the Block Island Wind Farm, in the Rhode Island Sound, could begin next year. Meanwhile, Ohio’s Lake Erie Energy Development Corporation (LEEDCo) is scaling up to build a nine-turbine, 27 MW wind farm in Lake Erie off Cleveland.

As offshore wind lurches forward, better technical and policy tools are needed, offshore wind experts said recently at the annual conference of the American Association for the Advancement of Science (AAAS) in Boston. At the conference, they offered new models, planning tools and lessons learned from the battles over offshore wind in New England.

“There’s a lot of interest in doing [offshore wind] if costs can be justified,” economist Robert Griffin of the Palo Alto, California-based Natural Capital Project, said at the AAAS conference. The wind speeds offshore are higher, which means wind farms can produce more electricity per turbine, and East Coast offshore sites are close to major cities that consume a lot of electricity.

At the conference, Griffin described a new wind energy model he developed that identifies sites where wind companies could profitably develop a wind farm.

The model, called the Integrated Valuation of Environmental Services and Tradeoffs (InVEST), can help calculate the power the wind farm would produce and the price per kilowatt-hour the owner would need to charge to make a profit. The model considers the measured wind speeds at a site, information about turbines and cables, and the distance to the nearest node of the electrical grid. The model will be released March 1.

Although the model was developed for the North Atlantic, “there’s no reason this couldn’t work in the Great Lakes,” Griffin told Midwest Energy News.

If the InVEST model is accurate in its technical and financial predictions, it would be “very useful” in planning for various contingencies, such as higher maintenance costs than predicted, or rising interest rates that make borrowing money for capital costs more expensive, Wagner said.

”It could help you do a lot of what-ifs,” he said.

Conservationists have their own set of what-ifs, as do commercial fishers.

A systematic mapping approach could help them meet their goals as well, said Sally McGee, who directs the Northeast Marine Program for the Nature Conservancy and serves on the New England Fishery Management Council, the major regional planning body for the fishing industry.

To plan offshore wind well, you need to know “where the wind is, where the fish are, and where are the important places for conservation,” she said.

She presented a map that overlapped the three types of information. Wind speed data came the Department of Energy, fish gathering spots came by aggregating fishing vessel trip reports between 2007 and 2011, and conservation hotspots came from the Northwest Atlantic Marine Ecoregional Assessment.

The conservation maps can “turn on the light on places that are most important for conserving ecosystems,” she said.

McGee offered two examples to illustrate the usefulness of this approach—and the importance of getting all the key parties talking early.

Off the coast of Massachusetts, the state government was pushing for wind energy to be sited offshore, and a map of promising wind areas happened to overlap with scalloping grounds that produce more than $60 million worth of scallops each year.

“That really put the fishing industry on edge,” and promulgated a lot of mistrust, McGee said.

For the Block Island Wind Farm off Rhode Island, however, the planning went more smoothly. State officials talked to fishers early, and ruled out one tract of water with good wind that was also a major fishing area.

Meanwhile, conservationists were concerned that many of the world’s critically endangered right whales fed each April in Rhode Island Sound, where the wind farm would be built. The developer, Deepwater Wind, and Conservation Law Foundation (CLF) agreed last month to delay pile driving in April of the wind farm’s construction year, even though that’s prime construction season.

Lessons for the Great Lakes

The Great Lakes region is at least several years behind New England in planning for offshore wind, and development has proceeded in stops and starts.

At the time of the Scandia tussle, then-Michigan Gov. Jennifer Granholm was promoting the development of offshore wind. Michigan owns 40 percent of the territorial waters of the Great Lakes, and much of that area is windy.

In 2009, “we had all sorts of people [in Michigan] cheering us on,” Boezaart said. Under an executive order from Granhom, the state established the now-inactive Great Lakes Offshore Wind Council (GLOW), which identified five priority areas for wind development in Michigan’s Great Lakes waters.

There was similar support in Wisconsin, Ohio and Illinois, and Ohio conducted a mapping exercise for its Great Lakes waters, considering factors such as wind resources, water depth, and the location of Lake Erie’s shipping lanes and shipwrecks.

But in the 2010 elections voters replaced Democratic governors with Republican ones in Michigan, Wisconsin and Ohio.

“It was like somebody flipped the switch and the resounding collective interest in wind energy on the Great Lakes disappeared overnight,” he said.

Nevertheless, those pushing offshore wind are not sitting idle. The states and provinces of the region have a rich history of collaborating on Great Lakes issues, said Victoria Pebbles, who runs the Great Lakes Wind Collaborative, which brings together wind developers, utilities, academics, conservation groups and government.

“We’ve managed to work through things,” she said.

Pebbles suggested emulating the federal Bureau of Ocean Energy Management to help agencies develop and streamline permitting before the inevitable offshore wind proposals turn up. BOEM’s Smart from the Start program, launched in 2010, aims to speed offshore wind development by getting states and the federal government talking. That’s what Michigan’s GLOW Council was trying to do, she said.

Great Lakes wind developers will also have to learn how to build wind farms in waters that freeze each winter, but that shouldn’t be too much of a hurdle, Wagner, of LEEDCo, said.

“The ability to build structures in water with ice has been known for hundreds of years, but the challenge is to do it as cost-effectively as possible” without overbuilding, he explained.

A shift in the wind?

The recent headwinds faced by offshore wind developers may be shifting.

“Despite the fact that we have politics at state level that are wind-resistant, we have a great push for offshore wind at federal level,” Boezaart said.

In 2010, President Barack Obama issued Executive Order 13537, mandating a new national ocean policy that promotes multiple uses of U.S. coastal waters, including offshore wind. The Department of Energy has a five-year plan in place to develop offshore wind nationally, and a strategy that commits to developing in-water wind technologies by 2015, he said.

In March 2012, the heads of ten federal agencies and five Great Lakes states—Illinois, Michigan, Minnesota, New York and Pennsylvania—signed a Memorandum of Understanding to coordinate review and permitting of offshore wind projects in the Great Lakes, which could reduce bureaucratic hurdles.

In December, the Department of Energy has also thrown in some cash to get seven offshore wind projects up to speed.

These included a $4 million investment for LEEDCo’s Lake Erie project. The company will obtain an additional $1 million from private investors.

In Europe, Wagner said, $200 million is being invested in offshore wind, and big companies like Lego, Ikea, and Blackstone are investing as well, as are pension funds.

“We’re starting to get a lot of private money involved,” he said.

And both he and Boezaart are optimists about the future of large-scale offshore wind in the lakes.

“Sooner or later,” Boezaart said, “we’ll take a look at the massive amount of wind energy available in the Great Lakes.”