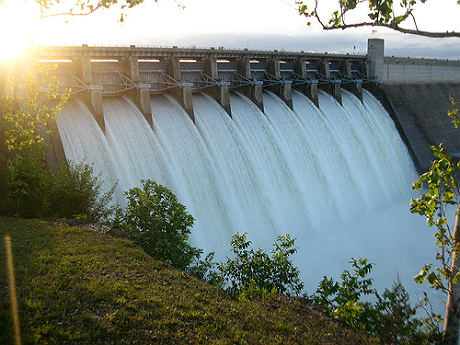 A bill in Missouri would allow energy from large hydro facilities, like the Table Rock Dam, to count toward the state's renewable standard. (Photo by jeff brown via Creative Commons)

Ohio’s energy efficiency and renewable standards will be on trial again this year in the state’s legislature.

The Buckeye State is among a few Midwestern battlegrounds where lawmakers associated with a conservative policy group are working to freeze, repeal, or otherwise weaken renewable energy policies.

Others so far include Missouri and Kansas, where fossil-fuel-funded groups have actively attacked the state’s renewable standard at public events and legislative hearings.

The efforts follow a call to action last fall by the American Legislative Exchange Council (ALEC) for its members to pass legislation repealing renewable standards in their home states.

“[ALEC] is definitely on the march,” says Gabe Elsner, who tracks oil and gas company lobbying for the Checks and Balances Project, a nonprofit watchdog group.

For example, an ALEC task force member who chairs the Ohio Senate Public Utilities Committee wants “a meaningful review” of the state’s efficiency and renewable standards.

State Sen. Bill Seitz, a Cincinnati Republican, outlined in a Feb. 1 memo a list of questions that he plans to seek answers to in a series of legislative hearings this spring.

Among them: whether to freeze the state’s efficiency standard, whether to revise the “cost cap” financial-burden threshold for exempting utilities, and whether to establish a “more accurate and transparent” way of comparing costs of electricity sources.

The legislator’s final question reveals the scope of what’s on the table in his view: what should be done about existing contracts “in the event that the current EE/RPS benchmarks are significantly altered or abolished”?

Dayna Baird Payne, a lobbyist for the American Wind Energy Association in Ohio, said debate about the efficiency mandate was anticipated after one of the state’s largest utilities, FirstEnergy Corp., floated a proposal to repeal it during last year’s lame-duck session.

The review of the renewable standard was less expected, though, considering that the legislature spent much of last session revising the law to include certain waste-heat recovery projects.

“The ink is hardly dry on that bill,” Baird Payne said.

Another ALEC task force member, Republican state Sen. Kris Jordan, has introduced a bill to repeal Ohio’s Alternative Energy Portfolio Standard, which requires utilities to get 25 percent of their electricity from “advanced” or renewable sources by 2025. That bill has yet to find co-sponsors.

But there’s nothing to stop Seitz from using his utilities committee chairmanship to put the state’s efficiency and renewable standards on trial.

“We’re prepared to have that discussion if that’s what he wants to do,” said Baird Payne.

In Missouri, clean energy supporters are accusing utilities and their allies in the legislature of trying to water down the state’s renewable standard, literally.

Missouri voters passed a ballot measure in 2008, with 66 percent approval, that requires utilities to generate 15 percent of electricity from renewables by 2021. The law lets utilities count hydropower “that has a nameplate rating of ten megawatts or less.”

Renew Missouri, a non-profit clean energy group, says utilities are violating the law by claiming hydropower from large facilities with individual generators of 10 megawatts or less inside. It’s filed complaints with the state’s utility commission against four utilities. (Ameren, one of the utilities, said the accusations are “100 percent false.”)

The arguments might become moot, though, if the state legislature passes a bill that would amend the renewable standard to count hydropower from any sized facility. The bill, HB 44, has already cleared a committee vote in the House.

PJ Wilson, executive director of Renew Missouri, said the “sideways attack” is a way for legislators to gut the renewable standard without appearing to directly go against voters’ will.

“The optics are a little bit better than if they were to come out and say renewable energy is worthless,” Wilson said. “It’s tricky.”

Wilson said there’s no hard evidence linking the hydro bill to ALEC, but it fits the organization’s mold and mission. Missouri House Speaker Tim Jones serves as a state chairman for the organization.

The deadline for introducing legislation in Missouri is Feb. 28. As of last week, no companion bill had been introduced in the state Senate.

In the House, Renew Missouri and its allies will need to convince 31 Republicans to join their position. So far, it’s recruited just three, Wilson said.

Elsner, of the Checks and Balances Project, said broadening the definition of renewable electricity shifts support away from sources that voters originally intended to be increased.

“Whether it’s big hydro or nuclear power plants, the effect is the same. It’s effectively eliminating or weakening the renewable energy standard that’s meant to increase the use of wind, solar and geothermal and [other] clean energy sources,” Elsner said.

A bill, SB 82, is on its way to the Senate floor in Kansas that would postpone the state’s 20 percent by 2020 renewable electricity standard by four years. In the House, HB 2241 would lower the standard to 15 percent by 2018.

The conservative state passed the 20-by-2020 standard in 2009. Last year it led the nation in megawatts of wind projects under construction — bringing in about $3 billion in investment from the industry, according to Republican Gov. Sam Brownback.

What puts the policy at risk is a flood of influence from groups such as the Heartland Institute and Americans for Prosperity, which Elsner says are using flawed and misleading economic analysis to scare legislators into second-guessing it.

“Unfortunately, I think some state legislators may be convinced by these groups that clean energy standards have a negative economic impact,” Elsner said.

It’s early in the 2013 legislative season, he said, but the way things in Kansas have quickly moved could be a sign of what’s to come elsewhere.

Bills to repeal Minnesota’s renewable standard have been introduced, but neither has much chance of advancing with Democrats in control of the House, Senate and governor’s office.

In Wisconsin, clean energy groups are monitoring a bill that would extend the definition of renewable power to include nuclear, though it would have little impact because most utilities have already fulfilled their benchmarks.

Connor Gibson has been tracking ALEC’s anti-renewable legislation for Greenpeace. In addition to Ohio, Kansas and Missouri, he sees Michigan as another state at risk for a weaken or repeal attempt.

Gibson said ALEC has the support of a network of industry and conservative groups that are determined to move energy policy in their favor.

“They win some and they lose some, but they are very persistent and they are consistently well-supported by large financial interests,” Gibson said. “If they don’t get everything they want, they find different avenues to approach.”