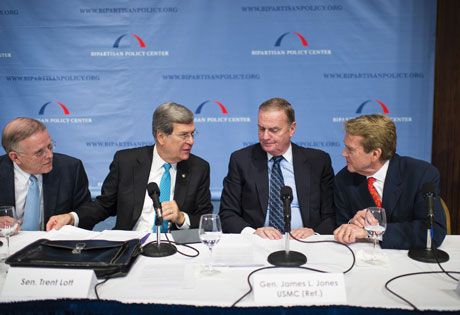 The recommendation was just one part of a comprehensive overhaul of federal energy policy that the Bipartisan Policy Center (BPC), a Beltway think tank Jones helps run, called for in a report released Wednesday.

More than 20 federal agencies now have a hand in creating energy policy, and they routinely work at cross-purposes. The result is a confused muddle that does not serve the nation, Jones said.

“My colleague Byron Dorgan said it best,” Jones said. “National energy policy today is like an orchestra without a conductor.”

The same was true in the national intelligence community in the 1990s, Jones said. Agencies were “stovepipes” of activity, each with their own turf.

Then “we created a director of national intelligence and forced the stovepipes to bend to the middle for a cohesive strategy and architecture,” Jones said. “It has kept our country safer.”

“We could do the same thing in the energy field,” he said. “It’s a question of having a conductor that’s charged by the President of the United States with that responsibility.”

The need for an overhaul became clear to Gen. Jones when he served as operations commander of NATO forces in Europe for 10 years and had access to classified intelligence reports.

“I listened to Osama bin Laden as he tried to attack the soft underbelly of our markets—access to energy,” Jones said. “I concluded that our vulnerability was such that we need to do something about it.”

After retiring from the Marine Corps, Gen. Jones served as National Security Advisor, and in that position, “I tried to include energy at the forefront as a national security issue,” he said.

The goal of the report was “to produce a comprehensive energy strategy, increase diversity of [energy] supply, and to spur innovation” in energy technologies to meet tomorrow’s needs, Jones said.

The BPC report listed four goals and 50 specific policy recommendations to achieve them.

The BPC also called for what in essence is an all-of-the-above strategy. This means increased oil and gas drilling, while at the same time moving steadily to reduce emissions.

They called for improving the nation’s “energy productivity”—the amount of goods produced or services delivered per unit of energy. Since the Arab oil embargo of 1973, improvements in heating, lighting, and other developments have offered the United States more savings than energy added from all forms of generation combined, the BPC said.

However, “despite this impressive record of progress, however, the United States is not close to exhausting opportunities to save energy at a lower cost than it can be produced,” the authors wrote.

At least one policy favored by environmentalists was soft-pedaled in the report: a federal renewable energy standard. The bipartisan team had “diverse views” on the topic, they reported.

The BPC did come down strongly in favor of deregulated electricity markets and retail pricing of electricity.

“We need greater energy sufficiency so the U.S. is not held hostage … to oil cartels, terrorists or tyrants,” Jones said. “That requires innovation.”

Put it all together, and “energy has the potential to be one of the few good news stories,” Jones said at the ARPA-E conference.

But to achieve energy security, the nation has its work cut out for it.

“Despite the enormous promise of energy abundance in America, success is not guaranteed,” he concluded.