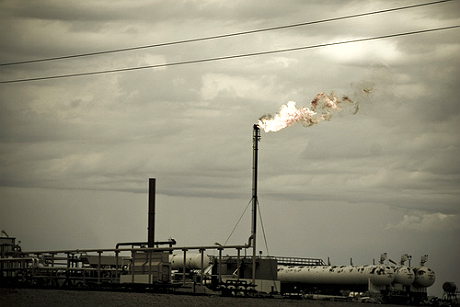 Continental Resources Inc., the top producer in the Bakken Shale, plans to reduce natural gas flaring from its well sites to “as close to zero percent flaring as possible,” the company said Thursday.

That announcement may have been lost behind the company’s towering profit numbers; Continental reported net income of $739 million for 2012, a 72 percent gain versus 2011.

But buried in its annual report, Continental said it has halved its 2011 rate of flaring, a common practice in the Bakken Shale that has lit up environmentalists’ radar.

Continental joins other Bakken operators that say they are getting a handle on flaring and can drive it toward the zero mark in the coming years.

“Setting a goal to as close to zero percent flaring as possible, and also disclosing it to investors, is a big step in the right direction,” said Ryan Salmon, manager of the oil and gas program at Ceres, a group that has organized investors to pressure industry on the issue. “This really demonstrates that it’s possible to reduce flaring and to do so quite quickly.”

It is no secret what brings drillers to the Bakken, and it’s not natural gas. But as companies draw oil from the Bakken’s huge reserves, gas bubbles up, too. In the remoteness of the Williston Basin, drillers often have nowhere to put this otherwise valuable commodity. So they burn it, lighting up the North Dakota sky.

Environmentalists have become increasingly irked by the practice over the past two years, especially when satellite data showed a new burst of light coming from typically black North Dakota. Flaring in the Bakken, analysts at the World Bank said, had vaulted the United States into the bad-boy club of global flaring, beside Russia, Nigeria, Iran and Iraq (EnergyWire, May 4, 2012).

With the addition of infrastructure, the rate of flaring has eased. In September 2011, 36 percent of produced gas was flared, according to the North Dakota Industrial Commission. As of this month, the figure is 29 percent.

Midstream companies have committed some $4 billion in pipeline and processing projects, to collect, modify and move gas. And some operators are using technology that gathers gas more efficiently or even burns it for electricity on-site.

Rules may be tightened

Under current regulations, drillers can flare a well’s gas for up to a year without penalty. After that, they have to control the gas somehow, whether by capping the well, burning it for power or connecting it to a pipe. Operators can apply for an exemption if these paths are impractical. But critics charge that this exemption is too easy to get.

Alison Ritter, a spokeswoman for the North Dakota Industrial Commission’s Department of Mineral Resources, said the point of the rules is to give companies a year to study a well and make a business decision about the gas.

North Dakota lawmakers are considering tightening the regulations, but they remain at odds on how to do so. Earlier this month, the state Senate rejected a Democrat’s proposal to end exemptions for flaring, for example. Another idea is to offer tax breaks for measures to reduce flaring.

“Everyone agrees that the rate at which flaring is going on in North Dakota is too high,” Ritter said. “We want to capture it; we don’t like seeing it flared.”

She said the state’s long-term goal is flaring of 5 to 10 percent. “There’s always going to be some flaring” as a result of normal operations, she said.

That might be true as a Bakken average, but some companies have set their sights lower. Whiting Petroleum Corp., and now Continental, have discussed zero flaring.

“Our goal is to have zero emissions,” James Brown, a Whiting executive, told The New York Times‘ “Green” blog in 2011. “It’s a waste to be wasting all of this energy.”

Pulling money out of the air

It’s hardly a matter of charity. North Dakota’s gas is rich in natural gas liquids (NGLs), a valuable commodity drillers would rather sell than send up in flames.

Justin Kringstad, director of the North Dakota Pipeline Authority, said industry members are pursuing the NGLs more doggedly than is recognized. They laid some 2,300 miles of pipe in 2011. The figures for 2012 aren’t out yet, but he believes they could be even greater.

“There’s a lot of value on the table right now to be captured,” he said. The authority is a government body but does not have regulatory power.

What is that value? Kringstad said industry wants to process those natural gas liquids and send them to markets in the Midwest, Canada and the Gulf Coast. To maximize the crop, he said, industry has to first build enough infrastructure to match the pace of new drilling. Then it can turn its attention to all the NGLs that are being flared off at existing wells.

Given the iron-clad economics of the Bakken, it amounts to a cherry on top. This month, analysts at Bernstein Research modeled what would happen if no company was allowed to flare beyond one year. They said North Dakota’s oil and gas production would fall no more than 2.4 percent; some producers would be forced to pay a tax, but that wouldn’t be enough to shut down an oil well.

“We conclude that such a law would not significantly impact production in the Bakken,” they wrote.

Some, like Salmon of Ceres, are continuing the push for tougher laws. Drilling in the Bakken is growing so quickly, he said, that it might not be enough to reduce flaring rates by a few percentage points. All the new drilling could increase emissions on a net basis.