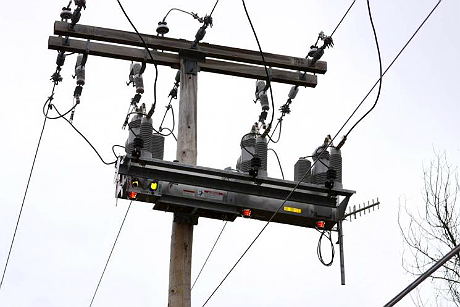 "Smart" switches on power lines can help regulate a two-way flow of electricity. (Photo via Department of Energy)

As solar panels and electric cars catch on among consumers, managing the grid becomes an increasingly vexing challenge for utilities.

To keep track of these and other distributed energy resources, utilities are installing ever more smart meters and other monitoring equipment. They now need to track far more data from far-flung locations just to reliably keep the power on.

The challenge is not insurmountable, but going forward the electric power industry will need new technology and new business and regulatory models, three experts said last week at the annual conference of the Advanced Research Projects Agency—Energy (ARPA-E).

Nowhere is this challenge more pressing than in California, which is on track to meet its goal of generating 33 percent of its electricity from renewable sources by 2020, said Geisha Williams, executive vice president of electric operations for PG&E.

About 90,000 of PG&E’s 15 million customers have solar panels—more than any other utility, Williams said. At the same time, 19 percent of the electricity PG&E generates comes from wind and other renewable sources. The utility has to keep the distributed grid safe, reliable and affordable, and PG&E feels that challenge keenly.

“This is not a theoretical issue” for PG&E, she said.

The basic problem is that “the grid was built for one-way power flow, but now we have two-way power flow,” Williams said. Electricity still flows outward on the grid from central power plants, but it also flows into the grid from distributed, more variable sources like rooftop solar panels and wind farms.

To help manage all those sources, PG&E has installed more smart meters than any other utility in the nation. But that’s just one of the company’s solutions, Williams said. They’re also installing intelligent switches at key locations to reroute power in case of a local outage, making the grid more of a self-healing network. And they’re installing devices called synchrophasors across their transmission system to monitor electricity flow on the company’s wires.

“We’re gaining a lot of experience working to address these challenges,” Williams said.

Keeping track of the traditional grid’s one-way flow still requires operators to maintain high-end supercomputers to keep track of all the data. Keeping track of data from tomorrow’s grid will be far more demanding.

Distributed energy sources add to the flood of data on power flows. Also, in more and more regions customers can respond minute by minute to changes in electricity price—shutting off devices, charging electric cars or discharging batteries. In these areas, companies must track not just the two-way flow of electricity, but must also calculate how much to charge or pay for it and to whom.

With all this going on, grid operators must still integrate information from all these devices to balance electricity flow on the grid and keep an entire region supplied.

This requires new types of systems in which intelligent controls are also distributed rather than centralized, said Jeff Taft, who’s the chief architect at Cisco Interconnected Energy Systems.

Before coming to Cisco, Taft worked on very large information systems and at companies that developed computers, software and devices to integrate information from the smart grid.

“I consistently ran into some problems implementing [these systems], at least at the pilot scale,” Taft said.

“Folks in the utility industry are very pragmatic,” he said. “They solve problems with the tools they have. But what we’re starting to see is that some of these tools really aren’t adequate to the tasks at hand.”

To meet the challenges of the evolving smart grid, engineers have begun developing ways to distribute intelligent control systems across the grid. Each of these systems can manage a small region of the grid independently, but they still communicate to a central location so grid operators can keep the grid as a whole running smoothly.

“You have a master problem and a set of subproblems,” Taft explained. “You break it down further to more subproblems. They become simpler at each level. And you coordinate through very simple data flows.“

“You end with a multiresolution view of the grid state and a set of signals that do not accumulate as you move up and down [in resolution],” Taft said. “That’s the key to handling all that information.”

PG&E’s customers who have solar panels may slash their electric bills, but those homeowners are actually making heavier use of the grid than others. What’s more, some also own electric vehicles, which can put high demands on the grid.

It’s PG&E’s wealthier customers, who live near the Pacific coast, who tend to have solar panels, while the company’s poorer customers in the Central Valley don’t.

For these reasons, customers in the poorer area “subsidize the more affluent community,” Williams said. “We’re working closely with regulators and policymakers to solve that,” she said.

(Related: Are feed-in tariffs a “subsidy” for a small group of utility customers?)

“Business, economic and financial matters must be factored in, otherwise we’ll only have a subsidized industry—and that’s not going to work,” Sun said.

Culturally, the biggest change happening is an increasing focus on customers. “Where the old power industry was dominated by big power plants, today customer service dominates everything,” he said.

“How do you satisfy electricity customers when what they want is, ‘Don’t bother me with it?’ We want to hide all the complexity behind the end service and give them choices,” he said. “This in a nutshell is our very high-level challenge.”

The challenge arises, or will arise soon, because customers will no longer have to buy power from a central power plant—they’ll have some combination of rooftop solar panels, demand response, and electricity storage. As a result, the industry needs to figure out how much people are willing to pay for green energy, or for access to a grid that they don’t use often, but that still must be reliable.

“I want clean, he wants reliability, you want cheap,” Sun said. “We can blend. There are ways we can do it.”

But it requires making a transition to retail electrical markets, which in turn requires transparency.

“In the old days, I didn’t know how much plant one or plant two cost because [the industry] was vertically integrated.” But in recent years “we have made tremendous progress as an industry in going from a very siloed, nontransparent operation” to a more transparent one.

In making the transition to a retail market, “there are tremendous lessons to learn and leverage” from traditional, wholesale electricity markets. “But what works in wholesale markets does not necessarily work on the retail side.”

Today what’s needed are “mechanisms where value can be assessed and risk can be transferred.” For example, what’s the value of building a new transmission line or installing energy storage on the grid?  The issue is “who pays for what? We can argue about it, but there’s transparency,” Sun said.

Regardless of the answers, Sun emphasized, both the electrical industry and regulators must adapt.

“This is like the Internet of the 1990s,” Sun concluded. “The distributed energy resources with the smart grid are here to stay.”