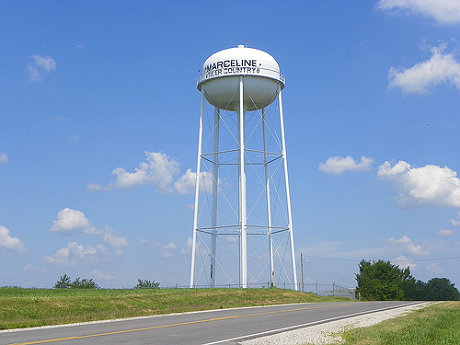 Officials in Marceline, Missouri say they'll have to cut city services to pay for their contract with the Prairie State Energy Campus. (Photo by J. Stephen Conn via Creative Commons)

As the U.S. Securities and Exchange Commission (SEC) investigates Peabody Energy Corporation’s role in the Prairie State Energy Campus, it remains unclear what exactly the commission is investigating or whether the utilities in eight states that are co-owners of the project have also received subpoenas.

But towns contracted to buy power from and cover costs of the trouble-plagued southern Illinois coal plant continue to lose millions of dollars on the deal, according to recent statements by local officials and analysts.

Critics say they are not surprised to hear the SEC is investigating, and regardless of the outcome, they hope Prairie State’s owners will move to reduce the burden on financially struggling towns.

The investigation was disclosed in Peabody’s annual SEC filing on February 25.

“We think it’s a suspect deal at best,” said Kerwin Olson, executive director of Citizens Action Coalition of Indiana, an environmental and consumer group that opposes the plant. “This was going to be a Peabody thing and suddenly Peabody shifted 95 percent of that risk onto small municipalities. It’s definitely worthy of investigation by multiple authorities we would think…we’re pleased to see the SEC stepping in.”

“The negative financial impact of the plant is becoming more and more apparent,” added Tom Sanzillo, finance director for the Institute for Energy Economics and Financial Analysis and a former deputy comptroller of New York state. “As the tolls mount for small governments, town officials and their attorneys are starting to recognize it and look at their options.”

A spokesperson for Prairie State Energy Campus declined to comment for this story.

Peabody launched the Prairie State project in 2001, to provide 1,600 MW of electricity powered entirely by its nearby coal mine. Peabody later sold off all but five percent of its ownership interest to eight utilities and electric cooperatives serving 2.5 million customers in more than 200 municipalities in Ohio, Indiana, Illinois, Michigan, Missouri, Kentucky, Virginia and West Virginia.

Ratepayers are responsible for buying a certain amount of power from Prairie State at set prices, even if they don’t need that much power or market power prices are lower, which has typically been the case since the plant started operating last year. An August 2012 report by the Institute for Energy Economics and Financial Analysis said ratepayers were paying up to almost double the market rate for Prairie State’s power.

Municipalities can resell power that they are forced to buy and don’t need, but electricity demand has dropped across the board since the economic crisis.

Many towns also signed deals making them responsible for covering the cost of maintenance and construction even when the plant is not generating electricity. The plant has frequently operated below capacity because of maintenance problems or other issues.

Luke Lewis, city manager of Marceline, Missouri, announced in February that the city has had to cut back on services and consider layoffs because of the Prairie State contract.

The town of about 2,500 – Walt Disney’s boyhood home — has an entire operating budget of $8 million, and its obligation to purchase power from Prairie State will deplete its funding by the end of the year, Lewis said.

He called the Prairie State contract a “toxic asset” that the town does not have control over and said he will recommend that the City Council “pursue all avenues for eliminating any further public funding or increased risk of Prairie State.”

Lewis explained in the letter that Prairie State was marketed to the town around 2004 as a good deal since natural gas prices were expected to rise and coal prices to fall, but instead “the opposite has occurred, and projections indicate it will remain this way for an additional 10 to 15 years.”

Lewis conceded that Prairie State could become a good deal two decades or more down the road, but he said there’s no way the small town can wait that long. He said town officials refuse to increase electric rates because of Prairie State.

“This IS NOT a solution, we cannot, nor will we even consider recommending the possibility of an electric rate increase,” said Lewis’ letter. “This would hinder the city’s ability to compete with other municipalities statewide for any economic incentive for future growth and development.”

He noted that a rate increase would also hurt existing businesses in the town, including Walsworth publishing company, the Hurtt metal fabrication factory and Moore Fans, which makes massive cooling equipment for power plants and other industries.

Meanwhile the town of Galion, Ohio, is officially in a state of “fiscal emergency” that many residents blame in part on the Prairie State deal and past power-related decisions.

AMP did not respond to Midwest Energy News regarding whether it had received an SEC subpoena.

The town of Batavia, Illinois, hired the Brattle Group, a Massachusetts-based consulting firm, to parse the financial prospects of the Prairie State deal. Their analysis, presented to the Batavia public utilities committee on February 14, found that Prairie State would likely continue to mean higher rates than the open market through at least 2024.

In 2007, when town officials were expecting significant growth, Batavia contracted to buy 55 MW of power from Prairie State. Recently the town had been working with the Northern Illinois Municipal Power Agency (NIMPA) to try to sell off a full 50 MW of that energy in 5 MW blocks. But in January public works director Gary Holm told the City Council the idea was scrapped since no one was willing to pay a sufficiently high price for the electricity.

At that meeting the Batavia commission was also notified that NIMPA had collected insufficient funds in 2012, and $1.2 million more would need to be collected in the first six months of 2013 — funds that were not accounted for in Batavia’s budget. The City Council had authorized the use of $2 million in reserve funds to help offset rate increases for customers; however at the meeting the commission learned that the entire reserve will be spent in 2013 while rates will continue to rise.

Batavia and Geneva, Illinois, have municipal elections upcoming in April. The power plant has figured in to the campaigns, and Prairie State critics have pushed candidates for their positions on the deal.

Ron Rechenmacher is running for a City Council seat in Batavia against an incumbent who voted for the deal with Prairie State. He decried the fact that town officials decided to buy not just a portion of their energy from Prairie State, but all of it — significantly more than their total needs given falling demand in recent years.

“Our council made the colossal mistake of putting more than all our eggs in one basket,” Rechenmacher said. “We’re dumping power onto the grid for pennies. It seems like Batavia has been the poster child for being snowed by these guys.”

Background documents submitted to candidates in both towns pointed out financial problems and also the fact that it is very difficult for regular citizens and even town officials to get detailed information about Prairie State — a situation Rechenmacher also lamented.

The document noted that the towns with significant financial interests in Prairie State have no say over its operations, except through one seat on the NIMPA board. And confidentiality provisions prevent NIMPA from releasing certain information about Prairie State.

It is not clear what a municipality’s legal options are regarding Prairie State, and the situations of different towns, utilities and states can vary greatly.

Olson said that especially in light of the SEC subpoena, the Citizens Action Coalition of Indiana intends to write to the Indiana Attorney General demanding the office launch its own investigation. Olson said it is especially difficult for Indiana residents to get information about the impacts of Prairie State because of the way local deals were structured.

“We’ve been seeking information and public records requests, trying to figure out precisely what’s going on,” Olson said. “It’s a very complicated financing arrangement and they did it differently in every state. Unfortunately in Indiana it looks like they did a better job of covering their tracks.”

Sanzillo said that legal issues aside, Prairie State and the utilities have an ethical obligation to work together to reduce the impact on ratepayers and towns.

“I’m a great believer these things aren’t ultimately legal issues, these are ultimately public and financial issues and it would be advantageous to be resolved in that manner,” Sanzillo said.

Sanzillo said that Prairie State officials need to start by acknowledging the serious problems and complaints about the project.

“They called it a success the other day,” he said. “Prairie State is not a success – it’s a problem project – that continued denial of the obvious is sort of childish and silly. It’s corporate double-speak that serves no one including them very well.”

Sandy Buchanan is executive director of Ohio Citizen Action, which tracks news about the plant on the website PrairieStateCoalPlant.org. She said the SEC investigation shows that “chickens are coming home to roost.”

“The SEC takes investigations very seriously – they don’t issue subpoenas lightly – so one would assume they think there’s some very important information they have to glean about the project,” she said. “The main thing is this plant has become so expensive, if you didn’t have this captive market of municipalities with contracts and a captive coal mine only selling to one plant, the market wouldn’t support this plant, it wouldn’t support anything about this plant.

“The only reason it’s surviving so far is they have these municipalities on the hook.”