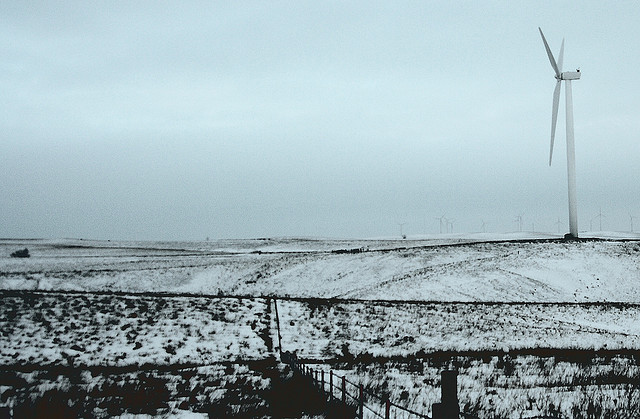 A South Dakota legislative conference committee agreed Thursday on an economic development proposal that could help the state’s wind industry catch up to its potential.

Taxes on wind farm construction in South Dakota are currently the highest in the region —up to ten times higher than in Iowa, Minnesota or North Dakota.

The proposal lawmakers agreed to on Thursday would let developers apply to the state’s economic development board for up to a full refund of the state’s 4 percent sales tax for projects $20 million and larger.

“It’s really a historic bill,” said Bob Sahr, general counsel for the East River Electric co-op, a member of the South Dakota Wind Energy Association. “They definitely, in South Dakota, have put the ‘open for business’ sign out for wind developers.”

The bill, which was one of two wind tax bills moving through the legislature this week, still needs to pass votes in the full House and Senate, which Sahr said is “extremely likely.”

The flat, gusty Great Plains state leads the nation in the share of electricity it gets from wind power — over 22 percent, according to the American Wind Energy Association’s most recent annual report.

But that distinction has more to do with the state’s small population and low electricity load. Despite having the fifth best wind resources in the country, South Dakota doesn’t crack the top 15 for total installed capacity.

“You don’t see the development that would be proportional with its excellent resource,” said Joe Sullivan, regional policy manager for Wind on the Wires, a nonprofit that works on wind and transmission issues. (Wind on the Wires is a member of RE-AMP, which also publishes Midwest Energy News.)

Several factors are at play, but taxes are a big one. South Dakota is among nine states that have no income tax. Instead, it relies more heavily on other types of taxes, including a 2 percent tax on work that contractors do.

On top of the contractors’ tax, South Dakota wind developers also pay a 4 percent tax on equipment. And the operator later pays a gross-receipts tax on power sold by the wind farm.

An analysis by Iberdrola Renewables estimates that a $200 million wind project in South Dakota will pay $11.4 million in upfront taxes, compared to $1 million in North Dakota, $1.2 million in Iowa, or $1.4 million in Minnesota.

“It’s an upfront disincentive to build in South Dakota,” Sullivan said, even considering the state’s superior wind resources. “The turbines are not spinning more often enough to make up the difference.”

Wind energy supporters say it is critical for the legislature to act this session before federal tax credits expire and new transmission upgrades are completed.

“We can tell you that if we don’t do something with our current tax structure, it’s very unlikely we would get any more wind energy,” said Ron Rebenitsch, executive director of the South Dakota Wind Energy Association.

The bill endorsed by the conference committee, SB 235, will let developers of many projects, including wind farms, apply for significant rebates.

Sahr said a typical $200 million project under the proposal would pay $1 million or less in upfront taxes, making it competitive with neighboring states. The state economic development board would still have discretion on whether to award full or partial rebates.

“The bill could go a long way toward reducing the very high up front taxes South Dakota levies on wind energy projects,” said Adam Sokolski, a business developer for Iberdrola Renewables who prepared its tax analysis. “We support the bill in its current form as passed by the Conference Committee.”

State Sen. Larry Rhoden, a Republican from Union Center, has introduced another bill, SB 195, that would refund much of the upfront wind farm tax but collect much of it back later through production taxes. That bill appears to be sidelined with the advancement of SB 235.

Any significant growth in the state’s wind industry is going to be driven by exporting electricity, which requires capacity on long-distance transmission lines between wind farms and larger cities to the south and east.

Several transmission projects are under development in the region, many of them specifically designed to deliver wind power, but South Dakota could miss the opportunity to connect if it doesn’t get projects moving into the queue. Capacity is typically awarded on a first-come, first-serve basis.

And exporting will be more costly and complicated because most of the state is not part of a regional transmission organization such as MISO, Sullivan said.

Wind farms on MISO’s grid are able to sell power to any customer in the MISO area, which covers much of the Upper Midwest and will soon extend south to Arkansas and Louisiana. In most of South Dakota, though, wind farms can only sell to the local utility, or else pay fees to use MISO’s transmission lines in order to connect with other customers.

“There’s a historic build-out of the transmission infrastructure that’s happening,” Sullivan said. “If South Dakota misses the opportunity, it’ll miss it for a while.”