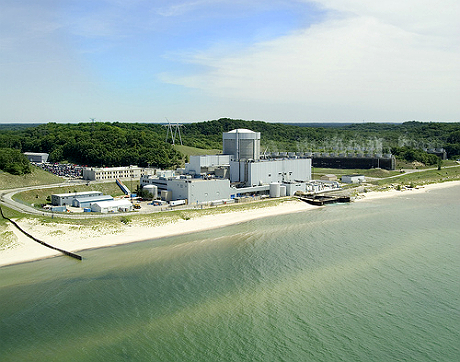 The Palisades Nuclear Plant in Michigan is among several flagged for safety issues in a new report. (Photo via Nuclear Regulatory Commission)

The Nuclear Regulatory Commission (NRC) has a “ripped nuclear safety net,” according to a new study by the Union of Concerned Scientists (UCS).

The report, by nuclear engineer Dave Lochbaum, details 14 incidents in 2012 where the NRC did special inspections at reactors and considered that the likelihood of a core meltdown had increased at least 10-fold over normal circumstances. In the past three years, 40 of the nation’s 104 reactors logged such incidents.

Lochbaum calls them “near misses,” a term that NRC spokesman David McIntyre takes issue with.

“When we conduct a special inspection this is intended to revise problems early before they become serious,” McIntyre said. “We would view these as evidence that the regulatory process works.

“We point out that none of these incidents posed any threat to public health or safety. The special inspection is done when something a little more than a routine problem happens – it’s meant to nip it in the bud.”

Lochbaum’s report acknowledges that none of the incidents posed an imminent safety threat. He told Midwest Energy News that the NRC’s approach on imminent and serious safety issues is “generally pretty good” and has improved significantly in the past decade, but he faults the agency for dropping the ball on seemingly more minor issues that could add up to or indicate very serious problems.

In the report Lochbaum compares the NRC’s current approach to a police department that investigates murders but ignores burglaries and vandalism.

“So far the United States has been lucky—with limited and notable exceptions, reactors that have fallen have avoided the ripped portion of the safety net,” wrote Lochbaum, director of the UCS Nuclear Safety Program. “The more often the net is used and the more the net itself is abused, however, the more likely it becomes that someday workers or the public will be harmed by a nuclear reactor accident.”

The report notes that nuclear reactors operate on the “single-failure criterion,” meaning that multiple protections and redundancies are supposed to be in place to ensure that a mistake by one worker or the failure of one component will not cause damage to the reactor core.

But in too many cases, Lochbaum posits, failure to adequately test and inspect backup systems means that these systems don’t function properly and make reactors vulnerable to serious consequences from “single failures.”

McIntyre said “we’re always looking for ways to improve the process. We look at everything that UCS puts out, and if there are ideas in there we can use, we take a look at it.” But, he said, Lochbaum’s report raises alarms unnecessarily about a process that McIntyre says is working well.

In June 2012 the Palisades plant was shut down for about a month because of a leaking cooling tank. Shortly after it went back online in July, workers noticed that there was another unrelated leak. They continued to run the plant for a month while trying to determine the cause, eventually shutting the plant down again on August 12.

They found a crack in a control rod drive mechanism housing, a type of problem that mandates shut down within six hours.

But before the type of leak was determined, it was subject to a more lenient regulation for leaks of unknown origin, mandating shutdown only when 60 gallons or more per hour are escaping. The leak had reached about 18 gallons an hour.

Lochbaum said the NRC should have sanctioned the plant for continuing to run for weeks with the leak. His report called the NRC’s lack of action “inexcusable.”

McIntyre said that since the type of leak wasn’t determined until August, the plant was never in violation of regulations.

“They were never operating at a point where we knew they had to shut down,” he said. “We have our regulatory limits, they are designed to identify potential problems before they happen. In this case those limits were followed despite what (Lochbaum) says.”

Lochbaum’s report says the regulatory requirements with more lenient standards for unknown leaks should be revised. He compared the Palisades situation to a driver trying to get out of a speeding ticket by saying their car doesn’t have a speedometer.

Lochbaum told Midwest Energy News that if the NRC would sanction Palisades for the August incident or other leaks, “it would put more incentives on the company to really fix this rather than band-aiding it over and over again.”

The Palisades plant was again shut down temporarily in February for problems with its cooling water system, and it has had numerous other problems and NRC violations over the years. In June 2012 the NRC essentially named Palisades one of the four worst-performing nuclear plants in the country by downgrading a rating.

As chairman of the Coalition for a Nuclear Free Great Lakes, Michael J. Keegan has been researching and monitoring the Palisades plant for a quarter century. He is deeply concerned that the plant is run by a limited liability subsidiary of Louisiana-based Entergy; he fears when the plant is eventually decommissioned or if there is an accident, taxpayers will have to pick up the tab.

He also decries what he sees as the NRC’s lack of action on the plant, calling the commission “a rubber stamp agency” that is “aiding and abetting” negligence on the part of the plant owners.

“Their pattern is to buy these used power plants and drive them into the ground,” he said of Entergy, which bought the 1971 plant from Consumers Energy in 2007 for $380 million, just after the NRC renewed the operating license through 2031.

“This is a plant in decline,” he said. “But their pattern is production over safety, profit over safety.”

Entergy did not return a request for comment for this story.

Lochbaum noted that the Palisades plant has only one reactor, not two or three like most plants. That means, he says, that there are fewer workers, meaning fewer people to notice problems. And it also makes the plant’s economics generally shakier since it is not generating any electricity when the one unit is off-line.

Dominion’s Kewaunee Power Station in Wisconsin, which Lochbaum said is the Midwest’s only other single-unit reactor, is currently being shut down for good.

At Exelon’s reactor in Byron, Illinois, on Jan. 30, 2012, a power line broke and fell to the ground. Safety systems meant to detect electrical problems and activate backup power sources including diesel generators were badly designed, it turned out, and ended up disconnecting the reactor from power altogether, shutting down the flow of cooling water.

Workers were able to rectify the situation before a disaster occurred, by manually reconnecting power and cooling systems. The UCS report called workers’ response “commendable” but faulted the NRC and Exelon for failing to detect the design flaws that led to the problem sooner.

The Wolf Creek Generating Station in Kansas logged two “near-misses” in 2012: a problem with a diesel generator and a more serious incident that merited a higher-level NRC investigation, wherein electrical failures disabled the main generator and then also disconnected the reactor from the grid.

The Fort Calhoun plant in Nebraska also had two such incidents, including a serious fire and an undefined security issue. FirstEnergy’s plant in Perry, Ohio made the list when unauthorized individuals entered secure areas of the plant.

Wolf Creek had the most “near-misses” in the past three years, with four. Palisades and Fort Calhoun tied for second with three in three years. Exelon’s Braidwood Generating Station about 60 miles southwest of Chicago had two incidents at each of its two units in that period. The Davis-Besse plant in Ohio also had one.

In the report, Locbaum recommends that the NRC more deeply and strategically evaluate the incidents triggering special inspections, including whether a plant’s own procedures should have identified the safety problems; if so, why they didn’t; and if not, how procedures should be revised.

Lochbaum noted that design or operating problems triggering inspections existed in some cases for years — or even decades — without being addressed.

Lochbaum also delves into the “safety culture” within the NRC, based in part on a report by the NRC’s own inspector general and another government-wide federal employee survey.

The NRC’s executive director of operations Bill Borchardt blogged about the same reports and interpreted the results as overall positive and better than many government agencies, though Borchardt noted special attention should be given to improving NRC employees’ “ability to raise different professional opinions or challenge the prevailing view; recognizing and respecting the value of human differences; and developing people to their full potential.”

Lochbaum interpreted the reports as raising serious concerns, namely that workers fear retribution if they raise questions and that senior managers have a much rosier view of safety prospects and the adequacy of inspection procedures than ground-level NRC employees do.

“These are canaries in the coal mine – if they’re not reporting problems they see because they fear for their jobs or figure what’s the use if no one’s listening, that could be a problem,” Lochbaum told Midwest Energy News. “These are tough issues to deal with. In nuclear power it’s a bunch of engineers who look at things with slide rules and equations. Safety culture is more touchy-feely, harder to define, harder for technocrats to get their arms around.

“A lot of companies have problems where management and the workforce don’t see eye to eye,” he added. “But the good news is by defining your problems you have a shot at solving them.”