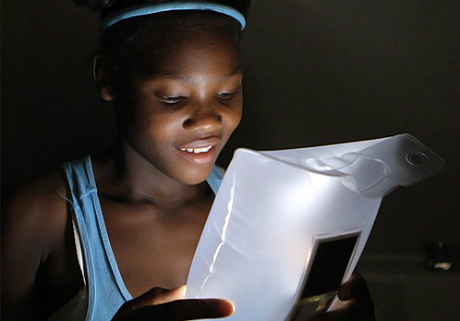 The LuminAID is a solar-powered LED light that can be distributed to disaster areas. (Photo courtesy LuminAID)

­The complicated, multi-faceted and lucrative mosaic that is the American clean energy economy includes some of the world’s largest corporations as well as up-and-coming entrepreneurs. And those small-scale efforts are just as crucial to developing technologies and companies that could be the next big thing in clean energy.

Midwest Energy News is a media sponsor for the event.

The competition will showcase 17 finalists for potential investors, clients and partners. Finalists have also received mentoring and other support through the Clean Energy Challenge program.

In early-stage and student categories, companies will compete for $100,000 prizes sponsored by the U.S. Department of Energy. McCaffery Interests, a Chicago company,  is also sponsoring a $50,000 commercialization prize.

Here is a closer look at three of the competitors gearing up for April 4.

Mike Stacey “had the entrepreneurial bug” early on growing up in Pittsburgh; working as a paper boy and cutting the neighbors’ grass.

He paid for much of his undergraduate education at Penn State University thanks to his success setting up a painting company through an internship program. After a stint in the consulting world he got his MBA in 2007 from the University of Notre Dame.

That’s where he and collaborators got the idea for developing window shades made of wafer-thin “wave retardant thin film” that fits inside or directly on windows, freeing people from the need to buy bulky shades and blinds which can be annoying and easily breakable.

They were inspired by “smart glass” which automatically tints in response to sunlight, boosting a building’s energy efficiency. Though smart glass has been around for many years, its cost means it is still not widely used in commercial or residential buildings.

In 2007 Stacey and colleagues founded the company Lono, LLC to produce SmarterShade window coverings that they hope will fill a niche between both the shades-and-blinds market and smart glass; an option that is sleeker, more convenient and more effective than shades or blinds but much cheaper than smart glass.

SmarterShades function with the push of a button, and they are much quicker to take effect than smart glass which tints gradually. SmarterShades are especially suited for skylights or other hard-to-cover windows, Stacey notes. They can be placed in between double-paned windows at the point of manufacture or snapped on to the outside of windows after-market.

The shades are created by overlapping strips of film in the same basic arrangement as traditional blinds, that when “closed” create a black opaque surface and when opened are nearly invisible. They are two-dimensional, completely flat, with “closing” meaning that different strips of film are shifted to overlap and the designs imprinted on them combine in a way that creates opaqueness. The technology is similar to that used in polarizing sunglasses. Stacey and his business partners, Ryan Tatzel and Will McLeod, have patented the use of such wave retardant film for window covering.

Stacey and his colleagues are working on pairing the SmarterShade with light sensors and tiny motors so – like smart glass — they can change automatically in response to light, without a human manually pushing the button. This would be important for energy efficiency in large commercial buildings.

While SmarterShade could potentially increase energy efficiency of commercial and residential buildings significantly – hence the company’s participation in the Clean Energy Challenge – Stacey noted that they are first focusing marketing efforts on appearance and convenience. Those are factors, he said, that interest most homeowners more than energy efficiency. It’s an example of the fact that motivating consumers to make energy-smart choices often involves appealing to them on various other fronts.

“People are dying for solutions for hard-to-shade skylights, I’ve seen boarded up and painted-over skylights,” Stacey said. “If you just optimize for energy efficiency you might not be around in two years. The clean-tech sector has been through a phase where a lot of money is going into these companies and the returns aren’t always playing out. We’re taking a sophisticated view of clean-tech investment.”

Solar power to the rescue

In an architecture and design graduate program at Columbia University, Andrea Sreshta and her classmates were tasked with designing a product for disaster relief. She and Anna Stork came up with the idea for solar-powered LED lanterns housed in inflatable waterproof, durable pouches.

Three years later, their class project has turned into a company based in Sreshta’s hometown of Houston. Stork and Sreshta run it remotely, with Stork based in her own hometown of Boston while Sreshta is finishing an MBA at the Booth School of Business at the University of Chicago.

About 5,000 customers have bought their LuminAID lanterns, and through their program called “Give Light, Get Light” about 3,700 lanterns have been donated to disaster survivors and communities, schools and orphanages that lack adequate electric light in countries including Rwanda, India, Chad and Nepal.

The LuminAID lanterns basically consist of an energy-efficient LED light and a laminated solar-powered circuit housed in a pouch which, when not inflated, can be packaged very compactly; 50 lanterns take up the same amount of space as eight typical flashlights.

When inflated, the pouch diffuses the light to illuminate relatively large spaces, bright enough for people to read or study. It’s water-proof, durable and it floats, making it ideal for disaster situations and also boating, camping, paddling and other outdoor activities.

The solar panel is constructed so that it is easy to recharge with the pouch clipped onto clothing or a backpack. The unit can recharge about 500 times, and the glow lasts for eight to 10 hours on a low setting and five to seven hours on a high setting.

The pair’s Columbia University class assignment came around the time of the Haiti earthquake, and examining coverage of the aftermath they realized there was a strong need for lighting in tent cities and other places where displaced people gathered. Stork and Sreshta also both happened to be in Japan for a school trip during the Fukushima tsunami and nuclear disaster in March 2011.

“After a disaster we typically think about food, water and shelter, but loss of infrastructure and lighting is a big part of it,” said Sreshta. “In Haiti you had really dangerous conditions at night. … in these crises things like electricity are often the first to go no matter where you are. Light becomes a universal need.”

Stork and Sreshta have partnered with NGOs and the United Nations to donate lanterns to survivors of Superstorm Sandy and also communities in the developing world where there is a lack of electric light on a daily basis. The lanterns retail for $18.95 and people can buy a package wherein they get a light and another is donated for $26.95.

Stork and Sreshta launched the company with a crowd-sourcing appeal for funding on the website IndieGoGo in December 2011, with the goal of raising $10,000. During the 40-day campaign they raised five times that amount through pre-sales, and since then demand and interest has continued to grow.

“We’ve been really lucky, we’ve found a lot of good customers who get behind our mission,” said Sreshta. “Roughly 25 percent opt to donate a light. We’re hoping to scale up in terms of global distribution and get it on retail store shelves hopefully in the upcoming season.”

In developing countries throughout the world, many millions of people live in crowded and burgeoning cities and towns with little or no access to either land-line phones or the electric grid.

Zmij is CEO and Rashidi is chief engineer of the company Amplified Wind Solutions. While Zmij sees a vibrant market in the developing world, their cell phone tower turbines will initially be rolled out in the U.S., where they could provide a valuable source of power in off-the-grid rural areas including Native American reservations. Diesel generators are typically used in such situations; a wind turbine with a battery can provide a cleaner alternative.

This design is actually a third generation incarnation of Rashidi’s and Zmij’s efforts to build novel wind turbines that can economically harness relatively low amounts of wind, relying on “amplification” to greatly increase the amount of power generated. (At least several other companies have been exploring the same concept.)

Rashidi’s first design looked like a water tower, in Zmij’s words, with “horizontal turbines dangling on the side like a chandelier.” That project was funded with a grant from the U.S. Department of Energy, and Zinji and Rashidi explored placing it on farms to provide electricity for silos and other needs.

The second generation model was an attractive, somewhat whimsical helix design 40 feet high and 18 feet wide that housed five small commercially available wind turbines nestled within its spiral. The idea was that the helix design would funnel wind more powerfully right into the turbines. It was installed at Progressive Field, home of the Cleveland Indians.

“We thought it might provide more shrouding for horizontal axis turbines and funnel more air into them,” explained Zmij of the helix. “We did find it enhanced performance slightly, but the whole structure was a little more complicated and expensive to build. So for generation three we wanted to go back to a more simplified design focused on durability, ease of manufacturing. Generations one and two were about proving the concept – that this amplification device actually works. Generation three is the design we’ll be bringing to market.”

Amplified Wind Solutions, founded in February 2012, was a semi-finalist in the Clean Energy Challenge last year and has also won awards at other entrepreneurship competitions.

Zmij said they are also looking at developing their turbine to work in conjunction with fuel cells or solar cells. And while the focus now is on cell phone towers, it’s possible the concept could be modified for rooftops in dense urban neighborhoods, where tall buildings interrupt wind flow – but amplification could make a turbine viable.

Zmij said she’s received interest from AT&T, Verizon and other cell phone companies. She said there are about 300,000 cell phone towers in the U.S. and about 600,000 worldwide, with the number expected to grow steadily.

“The developing world is the more compelling side of things,” she said. “So many of the towers there are off the grid. Running transmission lines can be prohibitively expensive. In a lot of those countries the towers are being run off of diesel generators running 24 hours a day.”

Replacing or scaling back the use of such generators means important health and environmental benefits. “The payback is immediate,” said Zmij, who expects to finish her MBA in August.

Though Zimj has always been a “sustainability nut,” she spent her undergraduate years as a fine arts major. A month-long trip to India helped spark her interest in powering the developing world.

“A lot of people scoff when they hear I have a fine arts background,” she said. “But I truly feel that building a business is totally related to the creative process. It’s all about problem-solving, all about thinking outside the box, looking at what resources and tools you have on hand. Putting all these things together and building something that works is beautiful.”