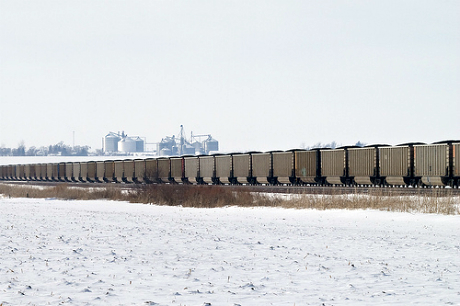 A coal train in northern Illinois. (Photo by contemplative imaging via Creative Commons)

The FutureGen Industrial Alliance is pushing back against utility challengers to its flagship “clean” coal project.

In a letter sent to Sen. Dick Durbin (D-Ill.), the alliance said that legal challenges to a 20-year power purchase agreement for FutureGen 2.0 — an advanced coal plant that aims to capture 90 percent of its carbon dioxide emissions — are unlikely to be successful.

Exelon Corp. subsidiary Commonwealth Edison and a trade association are appealing the power agreement approved by Illinois regulators for the carbon capture project in December 2012. The critics charge that the regulatory body, the Illinois Commerce Commission (ICC), stepped beyond its authority when requiring that the state’s utilities purchase FutureGen’s power when the coal plant becomes operational in 2017.

“We believe that the ICC’s order lies on firm legal ground … in no way does the Alliance intend to slow its efforts to develop FutureGen 2.0 while any appeal is pending,” states the letter sent last week from Ken Humphreys, CEO of the alliance, a coalition of coal-related companies.

FutureGen 2.0 is “on track” to begin construction in 2014, a timeline that will not change because of the appeals to the agreement, said one source yesterday who is close to the project.

The roughly $1.6 billion initiative envisions retrofitting a plant in Meredosia, Illinois, to burn coal and capture roughly 1.3 million metric tons of the facility’s annual CO2 emissions with oxy-combustion technology. The capture and storage of CO2 emissions from a coal-fired power plant have never been demonstrated at large scale.

The source said that the alliance’s recent posting of a map of a proposed CO2 pipeline route signals the project’s progress, despite the challenges. The route would take the greenhouse gas underground from the Meredosia capture site to its storage spot after crossing two major highways and the properties of more than 80 landowners.

Last week, FutureGen officials met with landowners along the 30-mile pipeline route as required by law, the source said.

Project moves on with lower costs

Babcock & Wilcox also announced an agreement last week with the alliance to begin initial engineering work. That followed a recent Department of Energy declaration that the project was moving into “Phase II,” a process that is expected to complete all of the plant’s permitting.

But the financing agreement continues to be a flash point between critics, Sen. Durbin and FutureGen officials.

Last month, Exelon President and CEO Christopher Crane sent a letter to Durbin saying that the company would not join the restructured FutureGen Alliance, despite its support for an earlier iteration of FutureGen in 2010.

Additionally, ComEd and the Illinois Competitive Energy Association — a coalition of energy suppliers — filed their notices to challenge the power purchase agreement with an Illinois appellate court. Critics say that the state’s utility customers will get hit with higher costs to pay for the remaining financing for FutureGen 2.0.

“Our decision reflects our long-held position that customers should not be forced to pay enormous above-market charges for electricity, as the project is now seeking,” Exelon spokesman Paul Elsberg said yesterday.

The original FutureGen envisioned a power plant built from scratch, with alliance members contributing much of the cost. FutureGen 2.0 has a different cost structure where “corporate contributions are significantly reduced,” according to Crane.

In approving the power purchase agreement, the ICC concluded that the project would not cause rates to rise higher than allowed by state rules. The commission said that the agreement would move the state forward in complying with an Illinois standard requiring that 25 percent of state electricity come from “clean” coal by 2025.

In his new letter, Humphreys said that the estimated rate of impact from the project would be approximately 1.3 percent, below a cap outlined by the state standard.

“The bottom line is that both project costs and ratepayer impacts have been reduced since January 2010,” Humphreys said.