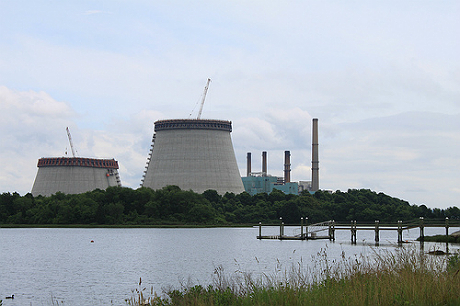 Cooling towers under construction at the Brayton Point Power Station in 2010. (Photo by Rick Payette via Creative Commons)

The $650 million after-tax deal also will see two other Dominion power plants transfer to the private equity firm by the second quarter of 2013, according to a release from Virginia-based Dominion. They are the 1,158 MW Kincaid Power Station in southern Illinois, also a coal-burning plant, and the natural-gas-fired Elwood Power Station outside Chicago.

The sale completes a divestment process begun last year when Dominion announced it would exit the merchant power business in order to focus money and attention on its rate-based service territory in the mid-Atlantic region (ClimateWire, Sept. 14, 2012).

When announcing the plants’ for-sale status in September, Dominion Chairman, President and CEO Tom Farrell noted that the plants had undergone extensive renovations and upgrades to make them compliant with the latest federal and state regulations pertaining to air and water emissions from power plants. “These are excellent, well-operating and well-maintained facilities,” he said at the time.

Dan Genest, a Dominion spokesman, said in an email that the sale to Energy Capital Partners proved to be a good fit for both entities.

“When we announced our intentions last fall to sell the power stations, we said they were valuable assets with great employees that would be attractive to the right buyer,” he said. “For our part, the sale fits in well with our strategy to decrease our risk by reducing our merchant operations and focusing more on our regulated assets.”

It remained unclear how the new plants would be incorporated into Energy Capital Partners’ existing generation portfolio, which includes five Northeastern plants managed by EquiPower Resources Corp., an ECP subsidiary based in Hartford, Conn. Calls to Paul Parshley, ECP’s managing director for investor relations, were not returned.

Sold for power, or scrap?

But critics, including the Boston-based Conservation Law Foundation, raised questions about the viability of large coal plants like Brayton Point given the recent industry shift toward natural gas as the dominant fuel for base-load power generation, especially in New England. The group issued an analysis this month stating that “the future for Brayton Point looks bleak whether Dominion continues to own the plant or another owner steps forward to buy the plant” (ClimateWire, March 1).

Jonathan Peress, CLF’s vice president and director of the group’s Clean Energy and Climate Change Program, noted that of the three plants in the sale, Brayton Point appeared to have the lowest value despite being the largest generation facility in the deal.

He pointed to an analysis issued Monday by UBS stating that most of the deal’s value was in the sale of the Kincaid plant in southern Illinois. Alternately, “we ascribe only modest remaining value to Brayton,” UBS said, estimating the plant’s value in the neighborhood of $54 million.

“On an economic level, Brayton Point has fallen from a book value of approximately $1 billion from Dominion’s recent investment in the plant, to the equivalent of a heap of scrap metal,” Peress said in an email. “It appears that Dominion essentially gave away Brayton Point in order to prevent it from further weighing down its balance sheet.”

The three-plant sale will require approval from the Federal Energy Regulatory Commission and must comply with provisions of the Hart-Scott-Rodino Act pertaining to larger mergers and acquisitions.

Dominion previously sold another New England fossil plant, the coal- and oil-fired Salem Harbor Power Station in northeast Massachusetts, to Footprint Power LLC, which will build a 630 MW gas plant on the site by 2016.