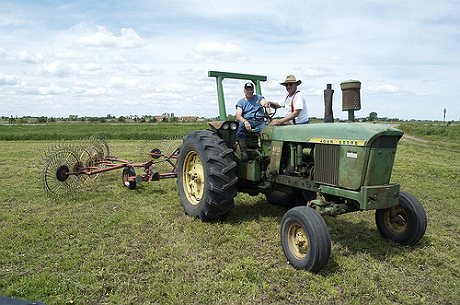 An organic dairy farm in Minnesota has become a high-profile example of the tensions that can emerge as new transmission lines are built through the rural countryside.

The owners of Cedar Summit Farm, in the path of the CapX2020 transmission project, claim the line threatens their business and want Minnesota lawmakers to increase compensation for farms that choose to relocate away from power lines.

If Cedar Summit opts to move, its status as a certified organic farm complicates the process. It takes three years to transition conventional farmland to organic, which means a move could disrupt its certification as well as production of its milk, cream and other products, which are treasured by customers for their high quality.

In an online petition with more than 4,000 signatures, Cedar Summit, which is also renowned for its sustainable agriculture practices, says either the farm will have to move or “work around high voltage power lines … that may affect the health of our employees, animals and land.”

Farm owner Dave Minar told the Minneapolis Star-Tribune in February that the farm “can’t be sustainable beneath a high-power line,” and other farmers have expressed similar concerns to lawmakers.

Minar acknowledges, however, that there is little if any science to support that claim.

“We didn’t find any documents studying the effects of this voltage on organic pastures, so the best we can say is there have been no studies,” he told Minnesota Public Radio last week. “The issue here is the lack of data, and we’re not interested in being Guinea pigs.”

In an interview with Midwest Energy News, Cedar Summit sales and marketing manager Ryan Crum said they believe electromagnetic fields (EMF) from the power lines will lower milk production and hurt the health of both the cows and microorganisms in the soil that support organic farming.

While it’s true that existing EMF studies don’t specifically address organic farming, volumes of research have been published on how EMFs affect both humans and animals, including dairy cows.

And from the National Institutes of Health to the World Health Organization, the conclusion of every mainstream health organization to study power-line EMFs in recent decades is that they are not a cause for concern.

We’re all exposed to natural and man-made EMFs every day. The most common source is the sun. Sunlight is on the higher-frequency end of the EMF spectrum, just below UV radiation and X-rays, which are strong enough to create heat and are known carcinogens.

In the middle of the spectrum are radio frequencies, such as those from cell phones and baby monitors, which are more debated but still presumed safe by most studies. On the lower end are the fields given off by power lines and appliances.

The most credible link between power-line EMF and human health is a weak association between prolonged exposure and a rare type of childhood leukemia. An analysis in 2000 found the risk may double from 1 in 20,000 to 1 in 10,000 for heavily exposed children.

“However, the evidence is not conclusive,” the U.K. National Radiological Protection Board said in a 2004 report, noting that some of the studies analyzed “were based on such small numbers that the findings could have been due to chance.”

A 1999 report from the U.S. National Institutes of Health also notes that none of the leukemia findings have been reproduced in animal studies, which “severely complicates the interpretation of these results.”

Doug Reinemann, a biological systems engineering professor at the University of Wisconsin-Madison, said several studies have compared the health and productivity of farm animals grazing under power lines to animals in other pastures, and found no difference.

Some of the earliest research on farm animals and EMF came in the wake of Minnesota’s power-line controversy in the 1970s, when dozens of farmers and their supporters were arrested for toppling power lines and vandalizing utility equipment in protest of a major transmission project (the state’s buy-the-farm law was enacted in 1977).

Another wave of studies were done in the 1990s as Canada was expanding its transmission system for new hydropower facilities, and more research has been done in the Pacific Northwest, Reinemann said.

“The bottom line is that no one has found any causal link or even an association between electromagnetic fields from a transmission line and these sort of adverse effects on animals or people,” Reinemann said.

One of the Canadian studies did observe a change in dairy cows exposed to unusually high EMF levels. In a 1996 study, McGill University animal science researcher Javier Burchard built an “EMF exposure chamber” big enough to hold eight cows. Over the course of a month he rotated 49 cows in and out of the chamber, which simulated exposure from standing directly under a 735 kV AC power line carrying maximum current load.

What he found was that the exposed cows ate more and actually produced more milk than other cows, similar to what happens with increased daylight exposure.

In addition to EMF radiating from power lines, another concern sometimes raised by farmers about power lines is that they attract or create so-called “earth currents,” slight electrical currents that travel through the soil.

In the mid-1990s, the Minnesota Public Utilities Commission assembled a scientific advisory committee to investigate claims by farmers that earth currents associated with transmission lines were causing health problems for dairy cows.

The conclusion, in the group’s 1998 report: “We have not found credible scientific evidence to verify the specific claim that currents in the earth or associated electrical parameters such as voltages, magnetic fields and electric fields, are causes of poor health and milk production in dairy herds.”

Harold Dziuk was one of the committee’s milk experts. He grew up on a dairy farm, earned a Ph.D. in animal physiology, and worked with cows as a professor at the University of Minnesota’s College of Veterinary Medicine until his retirement.

“If there was any measurable evidence of something different about the power supply and the currents and the fields on the farms that were affected, we should have been able to determine that,” Dziuk said. “That didn’t happen.”

The Minnesota report did find that electrical hazards exist on many farms, but the risk is from improper wiring or grounding of equipment, often done by the owner, operator “or other persons without electrical training.”

The committee’s field study found many code violations in work that was not done by electrical contractors, as well as examples of wiring that was not properly maintained or replaced when it became defective. This type of stray voltage is very real, but also can be mitigated.

The Wisconsin Public Service Commission has documented thousands of cases of on-farm stray voltage. The primary point of exposure is when cows come into contact with equipment in a barn that’s part of the electrical grounding system, Reinemann said.

This map, produced by Midwest Energy News using a Google satellite image and information provided by Cedar Summit Farm, shows the approximate route of the planned CapX 2020 power line near the farm. (Click to enlarge)

Crum, of Cedar Summit Farm, said the effect of EMF on the animals is their top concern, but they also have worries about aesthetics, erosion and loss of trees that are currently used as windbreaks.

The line will run along a highway a few hundred feet to the south of the farm’s main buildings, which include a retail store. The farm also offers tours to school groups and other visitors.

“Is the aesthetics an issue? Yeah, it is. Part of our business is having people down to the farm for farm dinners and events. This is going to affect that or make them obsolete,” Crum said.

Randy Fordice, a spokesman for the CapX2020 project, said the impact on the farm will be “minimal.” The proposed easement involves just 0.7 acres of the farm’s 114-acre property with only one structure, located in a marshy area, not the pasture.

Fordice also noted that the utilities have already developed a mitigation plan with the Minnesota Department of Agriculture that includes taking specific steps for organic farms, such as not using herbicides, pesticides or fertilizers and implementing erosion control strategies.

The Minars aren’t the only EMF skeptics, but much of the evidence that power lines cause health problems comes from anecdotal reports or studies that are too small or biased to be accepted by mainstream science.

The BioInitiative Working Group, an international group of scientists calling for stricter limits on EMF exposure, said in its 2012 report that much of the disagreement is over the level of proof needed to draw a conclusion. Another challenge: “there is no unexposed population.”

Crum provided Midwest Energy News with links to reports by a retired Michigan State University animal science professor, Donald Hillman, who claims power-line EMF exposure reduces milk production in cows. In an interview, Hillman said his report is based on data collected by an electrician at five Wisconsin farms where the owners’ complaints about electrical issues were dismissed by utilities.

The conflicting reports have left Cedar Summit Farm confused about what would happen if they don’t move. Could the organic farm coexist with the power lines?

“Honestly, we’re really not sure,” Crum said. “We’re trying to figure that out.”