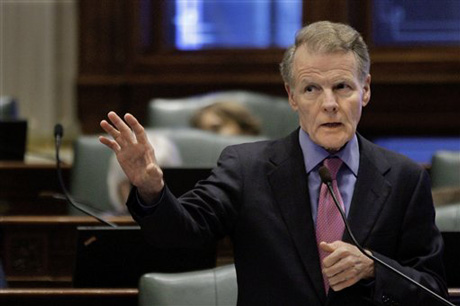 Illinois House Speaker Mike Madigan’s statement last week that he supports a moratorium on fracking has thrown both industry and environmental groups for a loop.

Many had thought Madigan supported the fracking regulatory bill introduced last month and widely described as the strongest in the nation.

Now people close to the issue are not sure if Madigan has had a change of heart; they also speculate he was trying to pressure industry groups to agree to significant extraction (or severance) taxes for fracking.

Such taxes were indeed added to the bill as an amendment during a committee hearing Thursday. The committee was expected to vote on Friday whether to move the amended bill to the House floor for consideration by the full chamber, but that meeting was postponed.

Like the environmental provisions of the regulatory bill, the taxes apply to fracking for both gas and oil.

Environmental leaders involved in shaping the regulatory bill had previously thought it was likely to become law. The bill introduced by Democratic Representative John E. Bradley on Feb. 21 was the result of months of discussions involving elected officials, environmental representatives and industry leaders. Gov. Pat Quinn had emphasized his support.

Madigan staffers were involved in discussions around the regulatory bill and his daughter, Illinois Attorney General Lisa Madigan, also backed it, according to people involved in the discussions.

Experts had not expected much progress on a moratorium bill also introduced last month in the state legislature. Now the fates of both bills are unclear; but with industry having agreed to taxes, Madigan may again back the regulatory bill.

Why taxes are a separate issue

Taxes were included in versions of the fracking legislation introduced last year and were discussed in the early stages of crafting of the current regulatory bill, according to people involved in the process. But the tax issue was left out of the regulatory bill as introduced.

Industry representatives were reportedly loathe to agree to a bill with significant taxes and parties on various sides of the issue were eager to get regulations on the books. The threat of the powerful House speaker backing a moratorium may have been what it took to get industry to agree to severance taxes starting at 3 percent and a $13,000 per well payment to help fund the regulatory process.

The blog Capitol Fax reported that Madigan made his March 13 announcement right at the moment industry lobbyists were waiting for a scheduled meeting with Bradley to talk about taxes.

“Bradley was scheduled to meet with the industry representatives at 11 o’clock.  He didn’t show up.  The invited guests cooled their heels for an hour before Bradley arrived around noon…Bradley had a tax deal in about twenty minutes.”

Josh Mogerman, spokesman for the Natural Resources Defense Council Midwest program, said they don’t know enough about the implications of Madigan’s statement or his intentions to draw conclusions.

He and other staff of environmental groups said they have no problem with a moratorium; but since a moratorium’s prospects are unclear, they are in the meantime eager to pass strong regulations.

“I certainly feel as it stands right now, anyone with $200 can get a permit to frack,” Mogerman said. “There are no rules on the books to protect those communities where a lease rush is already underway. People are exposed, that’s why we felt it was our responsibility to take part in the fast moving regulatory process to get serious protections in place for our communities and environment that can address some of the known risks of fracking. We’re not against a moratorium.”

Mike Madigan’s and Lisa Madigan’s offices and the Illinois Oil and Gas Association did not respond to requests for comment.

Opponents ‘not slowing down’

Annette McMichael, spokewoman of the grassroots group Southern Illinoisans Against Fracturing our Environment (SAFE), said she and other residents in areas where fracking is proposed will take Madigan “at his word.” Madigan had previously expressed support for a moratorium, including one introduced last year that never progressed.

The day before Madigan’s statement, SAFE organized a lobby day wherein about 130 residents met with legislators and then held a press conference at the state capitol rotunda.

“We’re not utterly surprised, we do believe he’s been looking at it (a moratorium),” McMichael said. “He’s been looking at what’s happening in Pennsylvania, and he is really concerned about the health and safety of people in southern Illinois.

“Whether Speaker Madigan actually supports the moratorium bill or if he just wants to put the regulatory bill on hold – sort of a self-imposed moratorium without actually being a bill – remains to be seen,” she continued. “We don’t know how he’s going to proceed with that, but SAFE will continue to work toward a bill that supports the moratorium. We’re not slowing down our efforts.”