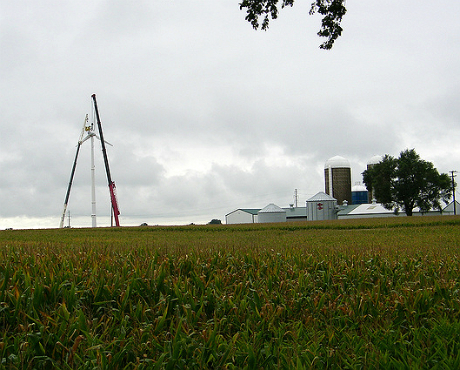 A wind turbine is installed at a Michigan farm in 2011. (Photo by Corey Seeman via Creative Commons)

An Iowa Senate subcommittee surprised utility groups and clean energy supporters alike earlier this month when it unanimously passed a bill that would establish a statewide feed-in tariff for small wind projects.

It’s the first time the perennial proposal has ever been cleared for a full Senate vote.

The bill, SF 372, would require all electric utilities in the state to purchase power from customers’ wind turbines at a guaranteed price for up to ten years. The program would apply only to wind projects built on agricultural land with a nameplate capacity of 20 megawatts or less. And power purchases would be capped at 50 percent of the utility’s sales growth in the previous year.

The state’s public utilities board would be tasked with setting a fair price per kilowatt hour and drawing up a standard contract for use with all qualifying projects.

Why is it significant?

Supporters of distributed generation — power that comes from smaller, individual- or cooperative-owned projects instead of large utility power plants — believe feed-in tariffs are the best way to boost clean energy. The policies, also known as CLEAN programs, are considered a key to Germany’s success in ramping up renewable energy over the past decade.

If Iowa were to adopt a feed-in tariff, it would be the first in the Midwest and among the first nationally, following states like Hawaii, California, and Vermont. And according to data from an Iowa Renewable Energy Association lobbyist, Ed Woolsey, Iowa’s program would potentially be among the larger, too, up to 60 megawatts per year.

“In the grand scheme of things … 60 megawatts a year is not that significant, but in comparison to other [U.S. feed-in tariffs] that have received far more attention, it is — and it’s being done in a conservative state,” said Paul Gipe, a California renewable energy analyst who tracks feed-in tariff policies in the United States and Canada.

He speculated that the Iowa bill could become a milestone for U.S. feed-in tariffs if it continues to move forward with bipartisan support.

Who supports the bill?

The bill was introduced by Senate Agriculture Committee Chair Joe Seng, a Democrat from Davenport. The committee consists of eight Democrats and five Republicans. The proposal has the backing of the Iowa Farmers Union, Iowa Environmental Council, and Iowa Wind Energy Association, among others, who argue that it will help extend the state’s success with large utility wind farms to smaller farmer- and community-owned projects.

Nathaniel Baer, energy program director for the Iowa Environmental Council, said the biggest obstacle for farmer- and community-owned wind projects now is that utilities refuse to offer a fair price for the electricity they would generate.

“I think the fundamental goal is to get a level playing field,” he said.

The state’s municipal utilities and rural electric cooperatives have come out against the proposal, which they say would take away local control and be unfair and unrealistic for smaller utilities to implement.

“Our primary objection to this bill is that it gives ratemaking authority to the Iowa Utility Board and takes it away from the local governing board,” said Bob Haug, executive director of the Iowa Association of Municipal Utilities.

Opponents also argue that feed-in tariffs amount to a subsidy for a small group of customers — those who own their own generation — at the expense of all other customers.

“The concept of subsidizing somebody’s electricity at the expense of others is one our boards around the state have not been able to get behind,” said Tim Coonan, lobbyist for the Iowa Association of Electric Cooperatives.

(Related: Are feed-in tariffs a “subsidy” for a small group of utility customers?)

Iowa electric co-ops have already connected more than 200 consumer-owned generation projects to their systems totaling over 14 megawatts, he said.

What are the bill’s odds?

“I think over time, Iowans are looking at this concept more positively,” Prior said. Clean energy groups have broadened the coalition of supporters by emphasizing its rural economic development potential.

Utility groups, though, warned against reading too much into the committee victory.

Julie Smith, a lobbyist for the municipal utility association, said the bill bypassed the usual process, in which legislation is introduced, assigned to a subcommittee, then taken up later by a full committee. Sen. Seng, using his committee chair authority, used a shorthand process to push the bill through committee in a single hearing just before a deadline for bills to be considered by the full Senate.

“Nobody really saw this coming. There was no opportunity for utilities to register their protest against the bill prior to it moving out of committee,” Smith said. She and other utility lobbyists regularly attend hearings for the commerce and environment committees, but not the agriculture committee, so they had no way of knowing about it until after the fact.

“[T]he odds against it, as in most other states, are very long as powerful forces begin aligning against it,” Gipe wrote last week.

The committee vote doesn’t guarantee consideration by the full Senate, but the bill could now come up for a vote anytime this year or next year.

Woolsey, of the Iowa Renewable Energy Association, said the Senate’s majority leader has indicated he won’t block the bill from coming up. He said he and others are working to pick up more supporters, and that they’re open to broadening the bill to include small solar and biomass projects as well. They’re also trying to recruit Republicans to take the lead with similar legislation in the House.

“This is farther than we’ve gotten in the past,” Woolsey said, “but we’ve got some heavy lifting yet to do.”