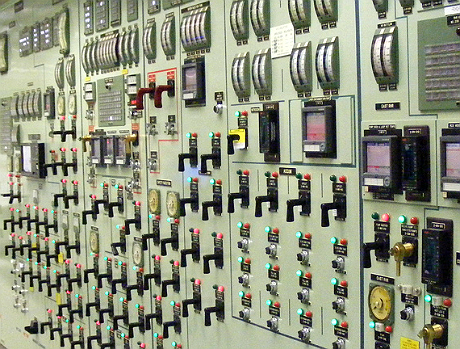 A simulated control room at the visitor's center for the Cook Nuclear Plant in Michigan. (Photo by John Grabowski via Creative Commons)

The future of a Michigan nuclear plant lies in the hands of Indiana regulators, as they decide whether ratepayers should be responsible for funding work needed to extend the plant’s life.

The Donald C. Cook Nuclear Plant in southwest Michigan needs $1.17 billion worth of upgrades to continue operating for another two decades, according to Indiana Michigan Power (I&M), a subsidiary of American Electric Power (AEP).

In 2005 the Nuclear Regulatory Commission granted license renewals allowing the plant’s two reactors to keep running through 2034 and 2037. I&M wants to bill ratepayers for 117 separate projects it categorizes as “life cycle management” necessary to extend the reactors’ lives.

In order to undertake the upgrades, the utility needs the go-ahead from Indiana and Michigan public utility commissions agreeing that the projects are needed and that ratepayers in the two states can be billed for the work as it progresses.

In late January, the Michigan Public Service Commission decided that Michigan customers can be billed for their proportional share of up to $851 million worth of upgrades on the 35- and 29–year-old pressurized water reactors.  That figure represents projects that the commission decided would fall within the state’s six year pre-approval window; and it includes a 10 percent cushion for cost overruns.

The Indiana Utility Regulatory Commission is currently considering the utility’s request, with the fate of the plant essentially hanging in the balance.

“We feel like we have put forth a case that is very strong, the data and the information absolutely supports our case,” Bodner said. “Clearly we can’t make investments we can’t recover, so we’ll wait for the order from Indiana and then make some decisions.”

The Indiana Office of the Utility Consumer Counselor recommended that I&M be able to recover $408 million from Indiana ratepayers. Parties that have intervened in the rate case have until April 9 to file “proposed orders” in the case, and I&M has until April 22 to file rebuttals to those proposals.

Critics say AEP is trying to bill ratepayers for general operating costs that are not meant to be included in this type of case.

“Most of (the upgrades) from our perspective are standard operations and maintenance, nothing unique that would have qualified them for the fancy term of ‘life cycle management,’” said Kerwin Olson, executive director of the environmental group Citizens Action Coalition of Indiana. “Is this just standard operating and maintenance the company has to do, or is it something special that should be allowed to be recovered and incentivized?”

Cook: A benefit or a bane?

The Cook plant is located on 650 acres along Lake Michigan’s shoreline, about 60 miles from Chicago amid a stretch of quaint, tourist-friendly towns. The plant grounds include public trails and AEP’s Cook Energy Center for visitors.

Some local residents and nuclear energy critics have called for the plant to be shut down, saying it is uneconomic and could pose a safety risk in the case of a terrorist attack, natural disaster or operating accident. Without NRC license extensions, the reactors would have had to shut down in 2015 and 2018.

“This is life beyond 40 for nuclear reactors,” said Olson. “This is unexplored territory for the industry.”

In a statement released after the Michigan Public Service Commission decision, Kevin Kamps of the group Beyond Nuclear called the plant a potential safety hazard and cited significant NRC fines for safety issues in the late 1990s and protests calling for the plant’s closure. He also noted that, as at almost all of the country’s reactors, tons of radioactive waste are stored on-site.

“Unlike the reactors, Cook’s high-level radioactive waste storage pools are not located within radiological containment structures, leaving it vulnerable to catastrophic fire in the event of an accident, attack, natural disaster, or loss of the external electricity supply to run cooling pumps,” said Kamps’ statement.

AEP says the plant is entirely safe, including from flooding (it is 11 feet above the highest recorded lake level) and tornadoes.

I&M’s original petition regarding the upgrades says that continued operation of the nuclear plant “is expected to be extremely beneficial for Petitioner (I&M) and its customers because nuclear generation is one of the few types of base load generation that will not be adversely affected by anticipated new, increasingly stringent federal air emissions regulations; nor does nuclear generation produce CO2 emissions, which may also be regulated in the future.”

In mid-February the Indiana Utility Regulatory Commission approved a separate $85 million annual rate increase requested by I&M to cover a portion of $3 billion in new investments on its fleet. That amount was boosted to $92 million after an accounting error was revealed.

I&M’s petition said it needed the investments particularly to meet demand since the company is closing coal-fired plants, most notably Tanners Creek in Lawrenceburg, Indiana. In this rate case, I&M had requested a $174.3 million annual rate increase while the state utility consumer counselor had recommended a $30 million increase.

An I&M press release said that, “Even after the increase, I&M residential customers will continue to pay among the lowest rates of investor-owned utilities in the state of Indiana,” and added that “a bill for a residential customer using an average of 1,000 kilowatt-hours per month will increase by approximately $12 a month over rates that were set in 2009.”

The Indiana utility commission is also still considering another case, regarding how ratepayers will be billed for pollution controls at I&M’s Rockport coal plant in southwest Indiana, necessary to meet federal regulations and a consent decree regarding nitrogen oxide and sulfur dioxide emissions.

Olson said that in light of low natural gas prices and increasingly competitive wind generation, it is not fair to ratepayers to bill them for costly investments meant to run either coal or nuclear plants long-term.

“At that time it was the appropriate path forward,” she said. “And we still believe, even with the gas prices where they are, that it is appropriate. When you look at the AEP fleet, Cook is the lowest-cost generator. To get another 20 years out of that is very cost-effective even with the low price of natural gas.”