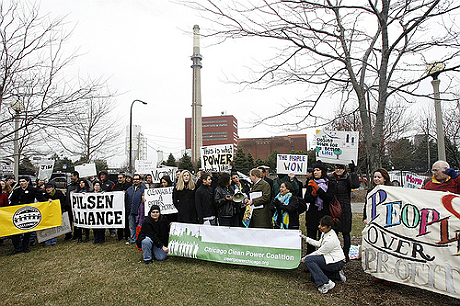 Activists celebrate the closure of the Fisk coal plant in Chicago in 2012. (Photo by Marianne Morgan/ELPC)

CHICAGO — The Fisk coal-fired power plant whose stack towers over the Pilsen neighborhood of Chicago has been closed for seven months.

But the plant is still very much on the minds of community activists who want to see the site cleaned up and turned into a park or other publicly beneficial use.

Residents who live near the Fisk plant and another coal plant closed last summer, Crawford in the adjacent Little Village neighborhood, have been worried about lasting contamination from the plants and demanding testing be done to search for any problems.

Testing results explained by Environmental Protection Agency (EPA) officials at meetings in Pilsen and Little Village March 20 and 21, respectively, revealed there are no significant levels of radiation or particulate matter in the air around the now-closed plants.

There are, however, high lead levels in surrounding soils, which could be attributed to the coal plants along with other historical sources including smelters, lead paint and leaded gasoline.

Meanwhile there is a pressing environmental issue at both sites — related not to the coal plants but the manufactured gas plants that operated there from the mid-1800s to mid-1900s and left buried coal tar and other contaminants.

The Pilsen and Little Village meetings are part of a community involvement process outlined in the federal Superfund law and required when the EPA is undertaking remediation.

As part of the process EPA officials are inviting Pilsen and Little Village residents to volunteer for individual or group interviews to help the agency learn more about the neighborhoods and residents’ concerns.

About 100 locals filled the gym of an elementary school near the Fisk plant March 20, where the EPA, Alderman Danny Solis’s office and the Pilsen Environmental Rights and Reform Organization (PERRO) community group had set up tables below colorful murals and climbing walls.

During meetings of a task force convened to help shape the site’s future, PERRO members have demanded the site and surrounding areas be tested for contamination. At the Pilsen event, EPA officials explained how they tested the air around the closed Fisk plant with four stationary monitors and a mobile monitor carried around the perimeter on a baby stroller. They found radiation and particulate matter at standard background levels for urban areas, raising no concerns.

EPA officials did find high levels of lead in the soil in various Pilsen alleys. The agency is continuing to investigate lead contamination, including seeking permission to test in residents’ yards.

While the coal plant did emit lead, nearby smelters have been considered greater sources of soil contamination. The EPA is pursuing cleanup of the site of one smelter that closed decades ago and is thought to have caused much lead pollution, including right near Walsh Elementary, were the meeting was held.

While the century-old Fisk coal-fired power plant appears not to have left a legacy of contamination in the neighborhood, the manufactured gas plant that preceded the coal plant on the same site, and also operated in tandem with it for a half-century, has left toxic coal tar buried underground.

ComEd owns part of the site including the coal tar; ComEd also owned the coal plant before selling its fleet to Midwest Generation following Illinois deregulation in the late 1990s. But Peoples Gas and its parent company Integrys Energy Group are responsible for the cleanup of the approximately nine-acre former manufactured gas plant site, which also includes property used by document storage and trucking operations.

From the mid-19th through the mid-20th century, manufactured gas plants turned coal into gas used for cooking, heating and street lights in “every town over 10,000 people…throughout the U.S.,” as EPA remedial project manager Ross Del Rosario said during his presentation to Pilsen residents.

The coal tar waste that resulted was typically buried. A known carcinogen, coal tar has made its way up through the soil and been cited as a serious health risk in other Illinois locations.

Del Rosario said that 10,000 cubic yards of soil contaminated with coal tar has already been removed from the Pilsen site, in an action completed in 2009. But after the initial investigation EPA officials found more remediation was needed and another settlement with Peoples Gas was reached.

The investigation stemming from that settlement is ongoing. It will result in a Record of Decision followed by a public comment period, then the EPA will negotiate with Peoples Gas around another cleanup plan. The whole process will take about a year and a half, Del Rosario told the crowd.

Sediment in the Chicago River abutting the coal tar site will also be monitored to check for leaching contamination. The EPA’s website says that in 2000, sediment samples taken 2,000 feet downstream from the gas plant site showed “high levels of PAHs, polychlorinated biphenyls (PCBs), oil and grease, and metals” at levels potentially harmful to organisms that live in the sediment.

From a plant to a park?

PERRO organizer Jerry Mead-Lucero said that in task force meetings, representatives of coal plant owner Midwest Generation have proposed turning their portion of the manufactured gas site into a public park after it is cleaned up.

Residents don’t like that plan, according to Mead-Lucero, since the parcel is next to a still-operating ComEd substation and is not easily visible or accessible from the street. PERRO members propose a park on Cermak Avenue at the opposite end of the coal plant site, as outlined in a colorful booklet PERRO produced with an architecture firm.

Now that concerns about lasting contamination from the coal plant have been largely laid to rest, Mead-Lucero said PERRO will continue to be vigilant and push whomever buys the Midwest Generation property to develop it in a way that offers public benefits and open space for residents.

“When they’ve identified a new owner we’ll have to put pressure on them to make sure they continue to work with the community,” Mead-Lucero said. “If they’re obstinate, it will be a whole new campaign.”

The task force including representatives of the mayor’s office, Midwest Generation, PERRO and other stakeholders has no binding power. “It’s all a good faith effort,” said Mead-Lucero.

“It’s up to the community to keep continually questioning,” added PERRO member Sarah Finkel. “I’m glad we’re seeing this turnaround, so many people from the EPA and the alderman’s office involved.”

“PERRO has really advanced this plan (for reusing the coal plant site), they’ve come up with these pie-in-the-sky ideas, which is great,” said EPA international affairs and history liaison Heriberto Leon.

He added that once options for the site’s future become more clear, EPA officials could assist community members in applying for grants under the agency’s Brownfields program or other opportunities.

“Our experience collaborating with them has been excellent,” he said.