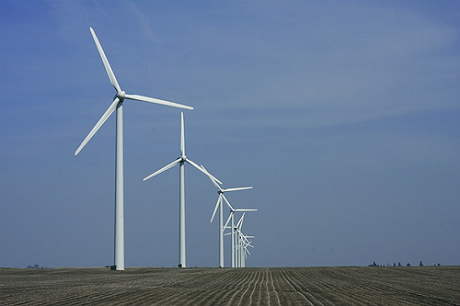 A groundbreaking renewable energy study is on the agenda this week at an annual gathering of the wind power industry in Iowa.

The analysis, which was published in the Journal of Power Sources, challenges the common notion that wind and solar power need to be paired with fossil fuel or nuclear generators, so utilities can meet electricity demand when it’s not windy or sunny.

The paper instead proposes building out a “seemingly excessive” amount of wind and solar generation capacity — two to three times the grid’s actual peak load. By spreading that generation across a wide enough geographic area, Rust Belt utilities could get virtually all of their electricity from renewables in 2030, at a cost comparable to today’s prices, it says.

The research is of particular interest to Midwest wind developers, who will hear from one of the study’s co-authors today at the Iowa Wind Energy Association conference in Des Moines. Cory Budischak, who teaches energy management at Delaware Technical Community College, is scheduled to speak at 9:35 a.m., immediately following Iowa Gov. Terry Branstad.

Budischak told Midwest Energy News that he started thinking about the topic after hearing a coal lobbyist claim wind could never replace a baseload power plant.

“I think this study really challenges that,” Budischak said.

Budischak and his colleagues used computer models to seek out the most economical mix of renewables and storage to meet electricity demand on the PJM Interconnection grid 30 percent, 90 percent or 99.9 percent of the time.

The team simulated 28 billion combinations of wind, solar and storage technologies using projected 2030 prices and historical weather and PJM load data from 1999 to 2002. (The PJM grid extends from Chicago east to New Jersey.)

The winning, most cost-effective combination turned out to be a whopping amount of wind power and surprisingly little storage.

The analysis found that wind power alone could meet all of the grid’s power needs 90 percent of the time if utilities over-built wind generation capacity to equal about 180 percent of peak load — around 140 gigawatts in PJM’s case.

By comparison, Iowa currently has about 5 gigawatts of wind capacity installed, with a potential wind resource of 570 gigawatts, according to the Wind Energy Foundation.

Under the study’s scenario, on windy days, thousands of megawatts of clean electricity might go to waste, but even on the worst-performing days there would be enough power from wind farms to meet all or most of the demand.

Renewables could meet demand 99.9 percent of the time by adding solar and storage to the mix and ramping up renewable generation capacity to around 290 percent of peak load.

The remaining 0.1 percent of hours could be covered by fossil fuel power plants, but if they become uneconomical to maintain, other mechanisms such as demand management, interruptible rates or other storage could close the gap.

Both systems, without subsidies, would cost less than the current one — if externalities such as health and environmental impacts are accounted for, the paper says.

The more-is-better strategy can be almost as effective as storage at smoothing out wind power’s peaks and valleys, but at a fraction of the cost, it concludes. By having more wind farms spread across a wide area, the odds of them all coming to a standstill at once diminish.

It’s a new way of approaching the challenge, Budischak said. Previous studies have looked at how to achieve significant renewable penetration, but they’ve focused on how to generate the amount of electricity we use, but no more. This study lifted that cap.

On the surface, it might seem wasteful, but the paper points out that today’s thermal fossil fuel power plants are far from efficient, and Budischak notes that the surplus power would be from a fuel-free source. “We’re not paying for the wind to blow or the sun to shine,” he said.

It’s also possible that the surplus generation could be used for electric heating, which could further improve the economics, he said. Wind generation tends to be higher and electricity use lower in the winter.

For Iowa, he said, the analysis could support efforts to expand the wind industry’s role.

“They can start to make the argument that this isn’t just something for 10 or 20 percent of our portfolio mix. We can really get to those higher percentages.”