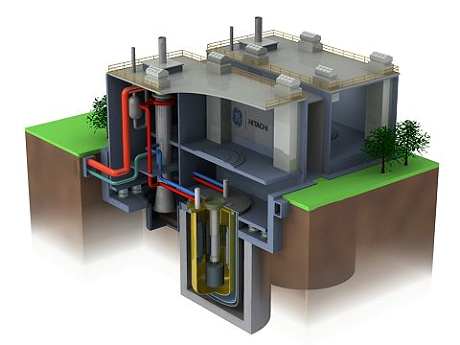 A new, smaller breed of nuclear reactor that is being promoted by the Obama administration may offer some advantages over the larger reactors that now provide about 20 percent of the United States’ electricity, but critics say they also have the same drawbacks.

While nuclear plant construction is largely a thing of the past in the U.S., the new smaller paradigm – and the $452 million in federal funds aimed at pushing it forward – has generated a lot of interest. At least four consortia of engineering and utility firms are now developing designs and licensing standards, and competing for federal funds.

One industry group, led by engineering/construction firms Babcock & Wilcox and Bechtel, has been awarded federal funds and plans to have its first small modular reactor (SMR) operating at a site in Tennessee by 2022.

FirstEnergy, a utility that serves Ohio and part of the mid-Atlantic region, is a member of two of the industry consortia. Although the company has no current plans to add SMRs, FirstEnergy spokeswoman Jennifer Young said, “We think it will have a place in the FirstEnergy footprint in the future.”

Given a flagging demand for electricity and a low price of natural gas, she said, “Right now, SMRs are not competitive. But we think they will be in the future. Gas prices won’t remain this low forever.”

The smaller-scale reactors could be a good fit eventually, she said, because they presumably would cost less upfront, and could provide additional power in modest increments. SMRs likely would generate perhaps 200 or 300 megawatts, compared to existing nuclear plants which typically generate about 1,000 megawatts.

Exelon, a Chicago-based utility that gets about 55 percent of its energy from nuclear plants, sees a different sort of potential.

“We don’t have any interest in building and owning these,” said Craig Nesbit, vice president for Exelon generation communications. Instead, Exelon sees itself operating SMRs for municipalities, small power companies and coops, or industries that wish to own an SMR, but don’t have the expertise to run one.

Exelon is collaborating with three of the consortia working on design and licensing issues.

In Iowa, MidAmerican Energy has also expressed interest in the technology. And a bill in the Illinois legislature would modify the state’s restrictions on new nuclear projects to allow “pilot projects” of less than 160 MW.

“It’s taking things in the wrong direction,” said Edwin Lyman, a physicist and senior scientist at the Union for Concerned Scientists, headquartered in Cambridge, Massachusetts. He has concerns about the financial and safety aspects of small nuclear plants.

“This is a technology in search of a user.”

A month ago, Taxpayers for Common Sense bestowed its “Golden Fleece” award on the federal subsidy for the SMR concept. The group’s president, Ryan Alexander, said that given across-the-board cuts in federal spending, the time seemed ripe to spotlight proposed new federal spending to foster development of a new nuclear technology.

The government should not pick “winners and losers” in the energy sector, she said, particularly when it means subsidizing a “mature industry” like the nuclear industry that “should be able to pay for its own evolution.”

Advantages of a smaller size

Backers of the technology, however, say it could become more cost-effective over time.

The small size of modular reactors makes them well-suited to locations that couldn’t accommodate a typical 1,000 megawatt reactor, such as rural areas, small grids and small utilities, said Glenn Neises, nuclear director and chief nuclear officer for Burns & McDonnell, a Kansas City-based engineering firm that is working with Westinghouse to develop an SMR design.

“It’s more feasible for more utilities to adopt into their portfolio.”

He sees other advantages. It’s projected that SMRs could be built in two to three years, compared to four years or more for the larger reactors.

Plans call for small modular reactors to be manufactured in one or two pieces that would then be shipped to a site and assembled there. The theory is that repeated manufacturing would increase efficiency and speed, and perhaps decrease cost over time.

Redefining nuclear-plant development as largely a manufacturing – rather than a construction – process is “one of the key things” that sets this apart from the last generation of nuclear plants, according to Rebecca Smith-Kevern, director of light water reactor technology for the U.S. Department of Energy.

“It could improve the quality and the cost profile. It could make the economics more favorable,” she said.

Nesbit, from Exelon, compared building the reactors to an automobile assembly line. Bringing a standardized process, standardized equipment and workers with experience would simplify and shorten the process, lower the price, and probably reduce the odds of mishaps.

The nuclear times have changed, according to Smith-Kevern.

Since the earliest nuclear plants were constructed, she said, “We’ve learned a lot. Improvements are occurring.”

Lyman, the physicist from the Union of Concerned Scientists, says nuclear technology “has turned out time and again to be more expensive and complicated” than promised.

Nuclear energy production in this country began with plants about the size of SMRs, he said. They gradually grew bigger, he says, because of economies of scale.

Costs are indeed a concern at the Vogtle nuclear plant in Georgia, where two new reactors are now under construction. An engineer appointed by the state’s utility regulator to monitor the process reported in December that the first reactor would be delayed by at least 12 months, hiking the cost by “hundreds of millions” of dollars.

The monitor also has reported delays in fabrication at a Louisiana plant of modules that eventually will be assembled on site. In December, the monitor attributed most of the delay in module manufacture to incomplete paperwork.

“They’re not reaping the benefits of modularity,” Lyman quipped.

Whether or not modules ultimately can increase efficiency and decrease costs, supporters of the SMR are enthusiastic about other aspects of its design. The Department of Energy stipulated that it wanted designs incorporating ”passive” safety features, which in large part are feasible because of the reactor’s small size.

While larger reactors depend on pumps and valves to move cooling water into a reactor in case of overheating, the theory is that the small plants now being developed could be cooled through natural forces. Convection would pull heat and radioactivity up, gravity would pull cooling water down from storage tanks into the reactor core which would be located below ground.

“Being smaller, there are a lot fewer precautions we will need to design for,” said Smith-Kevern. And the reactor’s location underground would make it much less vulnerable to weather and attacks from terrorists, she said.

She also anticipates many fewer employees than would be required at a larger nuclear plant.

The Union of Concerned Scientists is a member of RE-AMP, which also publishes Midwest Energy News.