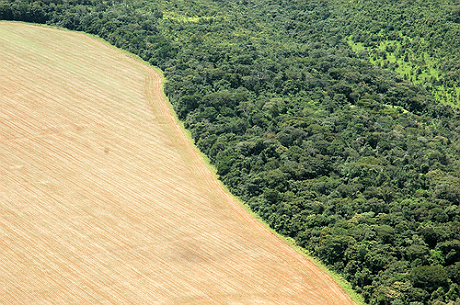 Forests give way to farmland in Brazil. A new study says climate benefits from U.S. ethanol mandates are largely negated as other countries clear forests and grasslands for agricultural use. (Photo by BBC World Service via Creative Commons)

The U.S. ethanol mandate is successfully lowering the nation’s greenhouse-gas footprint — but likely to cause a slight increase in emissions around the globe, according to the latest study of biofuels’ climate impact.

The analysis comes from researchers at Duke University’s Nicholas Institute for Environmental Policy Solutions, in a paper published this month in the journal Energy Policy.

“We find a very modest effect, but if you think that the ethanol mandate is a big winner in terms of its greenhouse gas implications, it doesn’t appear to be,” said Brian Murray, a co-author and the institute’s director for economic analysis.

The greenhouse-gas footprint of ethanol is among the most contested figures in all of energy, as debated and controversial as cost assumptions for coal-burning power plants.

Countless studies have attempted to pin an accurate, lifecycle emissions number to crop-based fuels, which displace fossil fuels but also drive changes in land use that can release heat-trapping gases even more potent than carbon dioxide.

One of the more comprehensive studies has been going on at the Nicholas Institute, where Murray and his colleages have used computer models to predict how land use changes with demand for corn and other biofuels crops.

Two years ago, the team published a paper examining the domestic greenhouse gas impact of the U.S. Renewable Fuels Standard, which will require gasoline companies to blend 36 billion gallons of biofuels into their products by 2022.

The conclusion then: the policy leads to a net reduction for U.S. greenhouse gas emissions, though the benefits are smaller than those estimated by the U.S. Environmental Protection Agency.

Since then, the group broadened its scope to look at the effect on global emissions. What’s likely to happen in the rest of the world as the U.S. uses more of its crops for biofuel feedstocks?

“We didn’t go into it to prove any one thing or another. We just went in objectively to see what we might find,” Murray said.

Their model shows that U.S. exports of most agricultural products would shrink, and other countries would fill the gap by converting native grasslands and forests into farmland. The global deforestation and increased use of fertilizer cancels out the environmental gains at home.

Increasing the mandate, they determined, leads to increases in global greenhouse gas emissions that exceed the reductions in U.S. fossil fuel emissions. Lowering the mandate results in increased domestic emissions but also lower global emissions from deforestation and fertilizer.

Global emissions also go up with the percentage of the mandate met with corn-based ethanol. Second-generation biofuels aren’t necessarily the solution, either, the paper notes:

“This analysis indicates that biofuel mandates based on second-generation biofuels could increase land pressures and actually increase net global GHG emissions. The availability and suitability of marginal land for growing biofuel feedstock is still under debate, and the economic profitability of production on such land could be challenging.”

Tom Buis, CEO of ethanol trade group Growth Energy, in a statement referenced a 2009 Yale University study that found “direct-effect” greenhouse emissions from ethanol to be 48 percent to 59 percent lower than gasoline.

“Biofuels are renewable and are 59 percent better than gasoline on GHG’s and the RFS has been and continues to be one of the most successful energy policies our country has ever had,” Buis said. “Not only has the RFS helped reduce dependence on foreign oil from 60 percent to 45 percent, it has helped improve our nation’s air quality all while creating thousands of U.S. jobs.”

Murray said there are a variety of reasons to support an ethanol mandate, including energy security and rural economic development. But the case that it lowers greenhouse emissions, one of Congress’ stated objectives when it created the standard, is getting tougher to make.