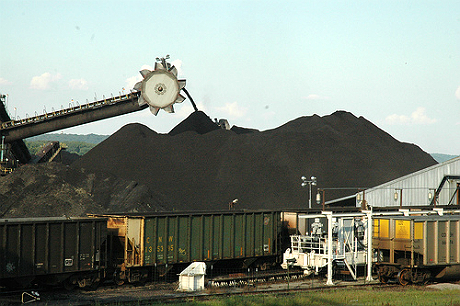 A coal shipping terminal in Illinois. (Photo by findoffenseinreason via Creative Commons)

Even as coal-fired power plants are closing nationwide, the coal industry is still very much alive — and facing environmental scrutiny — in Illinois mining country.

Mining companies are seeking to expand their harvesting of Illinois Basin coal, which is much cheaper than dwindling Appalachian reserves and closer to Midwest and East Coast power plants than Wyoming’s Powder River Basin.

As mine operators seek permits for expanded and new operations, environmental groups are calling on the Illinois Department of Natural Resources (IDNR) to reform its mine permitting process. They say that the current process doesn’t do enough to limit operators with histories of violations, and forces taxpayers rather than the companies to foot most of the cost of the permitting process.

In February and March the IDNR held five community meetings statewide to collect citizen feedback in advance of a state-sponsored Conservation Congress scheduled for September. Environmental leaders lauded the agency for holding the meetings, and took the opportunity to offer their own proposals for permit reform.

“A faulty mining permit process opens the floodgates for coal mining companies to extract coal from the Illinois Basin through dangerous and damaging mining practices,” said Sierra Club spokesperson Emily Rosenwasser in a telephone press conference the day of the final meeting, March 21 in Belleville.  “Changes are needed to make sure our land and water are protected.”

Sierra Club staff and local activists working with other environmentalists drafted proposals for reforms to the IDNR’s permit process.

IDNR spokesman Chris McCloud said the agency “appreciates the solid working relationship it has with all of our non-governmental organizations. We regularly meet with our partners to discuss how we can better serve the people of Illinois and the environment.

“We understand their proposals and also understand the process by which changes in rules and laws of this state must be followed. It is also important to understand that changes to certain laws and rules could require not only approval by the state legislature but also by the federal government.”

A key environmental proposal is that the IDNR impose stricter standards and do extra investigation at the permitting stage when a mine could potentially impact municipal drinking water. They point to the proposed North Canton and Banner mines in central Illinois as examples of cases that should have gotten more scrutiny from the get-go. Permits for both were initially granted and then ultimately denied, after citizens appealed during administrative review processes and the Illinois Attorney General’s office got involved.

“Concerned citizens with their own time and money — through bake sales, selling chocolate candy — have had to fight these battles,” said Sierra Club Illinois Conservation Chapter chair Joyce Blumenshine during the press call. “We are really concerned about the status quo where there’s not enough scrutiny to protect water supplies.”

McCloud said the IDNR’s permitting process works in tandem with Illinois Environmental Protection Agency standards on water quality, and he noted that mining companies need to obtain a separate IEPA water permit before applying for the IDNR permit.

Environmentalists also are demanding that permits prohibit the use of coal slurry impoundments to store waste from coal washing, a common process at mine sites.

The slurry contains selenium, magnesium and other toxic metals and can cause serious contamination of nearby water bodies or groundwater. The Sierra Club says one mine can use up to 500,000 gallons of water each day to wash coal, a significant drain in agricultural areas seeing sustained drought. The group also says companies should be required to use dry processing methods that don’t entail coal slurry storage.

Their complaints led the Illinois Attorney General’s office to send the IDNR a letter in 2011 raising concerns about lack of public process.

The groups are also demanding the permitting process utilize clearer and more stringent definitions of stream and wetland functions, including their importance to endangered and threatened species. Environmentalists say that in cases including the North Canton and Banner mine, streams or wetlands were misidentified and hence mining impacts on them were not adequately considered.

Sierra Club activist Terri Treacy said that in the permitting process for the Banner mine, “rare plants were either ignored or missed…We feel the whole process needs to be revised and streams and wetlands need to be more clearly identified and protected.”

Residents also think the IDNR should go to greater lengths to consider the economic and social importance of farmland, and the potential impact from underground longwall mining that causes subsidence that damages land and disrupts the local hydrology.

“Farms are being sunk — drainage that these farmers have worked on for decades to get it just perfect  is completely obliterated when they mine underneath,” said Treacy.

Another major demand is that permits be denied for companies that have repeated or ongoing safety or environmental violations at other mines, or are affiliated (via shared parent companies or subsidiaries) with other mines with repeated violations. Environmentalists also call for revoking permits for surface mines that have repeatedly violated state or federal water pollution standards.

They cite the Industry Mine owned by Springfield Coal Company, which logged more than 600 violations for water pollution between 2004 and 2011, according to an Illinois Pollution Control Board ruling in 2012. As those violations were pending, the company continued seeking permits for a legally separate new mine called North Grindstone.

Opponents said it should be seen as an extension of the Industry Mine, and that the IDNR should consider Industry’s record in debating whether to grant North Grindstone’s permit.

“These companies are of course very strategic, they have often multiple different names and different locations,” said Blumenshine. “Sometimes it’s not apparent on the surface to whom they are related. Those parts of the application process really need to be scrutinized,” and mines should have to “reveal the information” about their affiliates, she said.

Treacy said critics think mining companies are also given too much leeway regarding past violations if they say they are in the process of addressing the violations. Environmentalists think companies should have to prove they have successfully remedied past violations to be considered for new permits.

The environmentalists are also demanding that mining companies pay more for permit applications, so the IDNR has more funds to thoroughly investigate applications and so taxpayers aren’t ultimately picking up the tab.

Currently a permit application costs $125 per acre for a surface mine and $25 per acre for an underground mine. If a permit is denied, the company does not pay at all. The environmentalists want the fees to be paid up front, regardless of whether the permit is granted or denied.

“The mining permit process puts all this burden on the IDNR, it takes time and staff resources away from them being able to do the basic science,” said Tracy Fox, a Sierra Club activist who attended the IDNR meeting in Normal, Illinois. “Mining permit fees need to be raised until they cover the cost of permitting, the research IDNR needs to do, the hiring of experts, holding public hearings.”

The groups also say fees should be higher for revisions and renewals of permits.

“Often a company will apply for and get a permit and then immediately apply for a revision — a major revision — and once the mine has their permit the revision is pretty much rubber stamped through,” said Treacy. “We definitely want to see permits be complete in terms of future actions the company knows about when they make their initial permit applications.”

The groups say the permitting process should be made more accessible to citizens, with documents filed electronically and easily searchable.

“IDNR is such a paper-centric system,” said Fox. “In this day and age no one should have to wait for a document to be photocopied and mailed.”

While permit reform could mean significant improvements in the accountability of mining companies, it can’t address some of the most pressing concerns of residents of mining areas.

Prime among these is the situation wherein ownership of mineral rights allows a company to use or buy a farmer or resident’s land if they need it to access and process their coal.

Bryan Overcash is facing such a situation. About a decade ago he bought 200 acres of Illinois farmland as an investment he planned to pass on to his son. Overcash lives in Colorado, but has spent much time in Illinois for the past 35 years.

When he bought his land he said he was never informed that he could be forced to sell to the owner of the mineral rights underneath — in this case, a company owned by West Virginian Chris Cline, dubbed the “New King of Coal” with extensive mining operations in Illinois.

Overcash doesn’t think Cline’s company’s offer of “market value plus 10 percent” for his land is fair, and he’s worried about either finding replacement land or being saddled with taxes for the sale.

“I’m an old retired guy, but say you was in your 20s or 30s, with a family, and you went out and borrowed money to buy all this land,” and then had to sell at a net loss, he said. “That would be devastating to a young person.”

A call to Cline’s company, Foresight Energy Partners, was not returned.

The Sierra Club believes Cline’s company has violated their state permits regarding impacts on water at the Shay 1 Mine in southern Illinois; the IDNR is reviewing the situation.

Blumenshine said the Sierra Club thinks that “any Chris Cline-related mine in Illinois should not be given new permits, permit revision approvals, or permit renewals until they do something about the ongoing water pollution at the Shay 1 Mine.”

More importantly, she and other industry critics think archaic mining-related laws should be revised.

“It is outrageous in this day and age that a coal company can come in with claims based on deeds from generations ago, and force homeowners to sell their land and homes,” Blumenshine said. “The type of highly damaging longwall mining done now was never envisioned in the early 1900’s when many coal rights and these strange leases were done. This just is not right.”