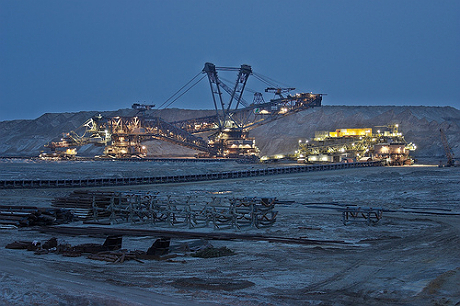 Europe’s declining competitiveness with U.S. industry has its leaders worried, but they admit having no hope of matching the shale revolution that is powering a revival of manufacturing across the Atlantic.

For Europe to remain in the game, energy taxes must be held in check and no new taxes levied, said the European Union’s energy commissioner, Gunther Oettinger.

Instead, Europe must use its energy more efficiently and the European Union’s 27 member countries should open their energy markets to cross-border competition, Oettinger said at a news conference last week in Brussels.

With its conventional gas fields nearly depleted and gas prices four times higher than in the United States, Europe would like to develop a thriving shale gas industry, but that seems unlikely in the near term.

“We do not have that many North Dakotas in Europe. We do not have those deserted areas where you can drill and no one is being asked or complaining,” said Connie Hedegaard, the European Union’s commissioner for climate action.

“We will not see prices in Europe for shale gas come down to the level in the U.S.,” she said.

There is no E.U. regulation against unconventional drilling, although the environment commission is drawing up guidelines of best practices. Each country is free to chose whether to drill. So far, fracking has been conducted on a test basis, and two countries, France and Bulgaria, have banned the technique for now.

Oettinger and Hedegaard jointly were releasing a policy paper setting the framework for climate and energy targets for the decade after 2020. Documents released alongside the Green Paper made it clear the trends are not running in the climate’s favor.

Europe is in a quandary. For years, it has claimed to be a global leader in fighting climate change and slashing carbon emissions. Now it finds itself running out of conventional gas and turning back to dirty coal. Oettinger said onshore and North Sea gas deposits will be depleted by 2035 or 2040.

In the meantime, coal is increasingly the option of choice.

Although Europe mines more than 70 percent of its own coal, it has been buying the surplus coal spurned by the U.S. power sector after American plants shifted largely to gas. These imports have “potentially halted, and to some extent reversed a two decade long trend of decreasing coal consumption,” says one document.

Coal is cheap not only because U.S. supplies are sold at bargain prices but because the penalty for emitting too much carbon has become almost insignificant.

Europe’s cap-and-trade program is meant to make it expensive for industry to pollute. Industries that emit more carbon dioxide than permitted must buy pollution permits from facilities that release less CO2 than allowed. The market price is determined by the availability of those permits.

In practice, the economic recession has led to an industrial slowdown, less emissions and an overabundance of permits for sale. Thus, the price of carbon has collapsed to less than €5 per ton.

That means buying carbon credits to burn coal is cheaper than fueling power stations with expensive gas. Analysts say a price of €20 is needed to incentivize power plants to switch to low-carbon energy.

“Coal has become a new and economically interesting input for power production in the E.U.,” says the paper. “The lifetime of power plants that were expected to close is now being extended, and as such the risk related to carbon lock-in for new fossil fuel developments increases.”

In Britain alone, the use of gas in power stations dropped 31 percent and the use of coal rose by the same amount from 2011 to 2012, driving a 4.5 percent increase in carbon emissions, according to figures released last week by the U.K. Department of Climate and Energy.