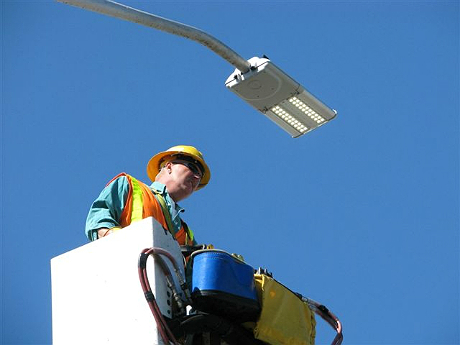 Workers install LED streetlights in Seattle in 2010. (Photo via City of Seattle)

As more cities see the economic benefits of high-efficiency LED streetlights, the technology is rapidly moving from the experimental phase and becoming the new standard.

Alliant Energy announced in March that it would gradually replace the 44,000 streetlights it owns in communities throughout its Iowa service territory with lamps using light-emitting diodes, or LEDs.

Because the utility plans to replace lights as they stop working, it anticipates that the transition could require as many as seven years. Alliant also plans to conduct pilot projects in communities within its service areas in Minnesota and Wisconsin.

“We want to help customers be more energy-efficient so we don’t have to have extra generation,” said Alliant spokesman Justin Foss. “This will help us control our load growth.”

About 20 small city-owned utilities, members of the Iowa Association of Municipal Utilities, made a joint purchase of about 1,800 LED streetlights last year, and more are on the way.

In January, Xcel Energy finished replacing 525 streetlights in West Saint Paul, Minnesota, with LED fixtures as a pilot project. Xcel also is testing LEDs in Amarillo, Texas and expects to launch pilot projects in Denver and an as-yet unidentified city in Wisconsin.

“If everything works out, we could replace 92,000 lights,” said Ed Bieging, Xcel’s outdoor lighting manager.

Other cities throughout the U.S. and the Midwest have implemented or tested the technology, including Cleveland, Chicago, and the Michigan cities of Ann Arbor and Holland.

“The momentum is picking up very quickly,” said Ed Smalley, director of the Municipal Solid-State Street Lighting Consortium, a U.S. Department of Energy initiative aimed at encouraging and optimizing the movement towards LED streetlights. “It’s taking place in lots of towns across the U.S.”

A study conducted last year by Pike Research, now a part of Navigant Consulting Inc., projects a steep upward curve in sales of LED streetlights, from about 3 million in 2012 to 17 million in 2020.

The quickening pace is due in large part to rapid improvements in LED technology.

Estimates vary a bit, but according to Smalley, the light generated by a 130-watt high-pressure sodium light could be produced with a 100-watt LED light a few years ago. Now, he said, the technology has improved so much that all it takes is a 42-watt fixture – a savings of more than 67 percent.

The cost of the LED fixtures, while still much higher than for high-pressure sodium streetlights, has fallen considerably — by about 50 percent over the past five years, according to Smalley — and is expected to fall further.

While it’s difficult to generalize, Smalley said that at present, a high-pressure sodium or metal halide fixture — the type used in many communities today — might cost a median-sized city from $60 to $100 each. An LED fixture for such a community would likely cost about $200 to $300.

However, a high-pressure sodium streetlight requires a new bulb every three to four years, according to Smalley, whereas an LED can function maintenance-free (apart from occasional cleaning) for 15 to 20 years.

When you account for energy and maintenance savings, the costly new streetlights pay for themselves in about seven years, according to Anne Kimber, the director of energy services for the Iowa Association of Municipal Utilities.

“So much money flows out of a community to pay for energy,” she said. “Keeping that money in the community helps its citizens. We feel really good about this.”

The association last year sought bids for about 1,800 LED fixtures for about 20 of its members, ranging from tiny Westfield (130 residents, 40 streetlights), to Algona (5,500 people, 469 streetlights).

There are many LED options on the market, she pointed out, and it’s easy to make a big and costly mistake. San Antonio, Texas, for example, last year returned 25,000 new LED streetlights to the manufacturer after the lights started failing following a rain.

Since her small-town members don’t have streetlight expertise, Kimber called on the Municipal Solid-State Street Lighting Consortium for guidance. Funded by the Department of Energy, and headed by Smalley, the former streetlight czar of Seattle, the consortium provides training and advice to cities and towns contemplating the switch to LEDs.

The consortium “is about sharing information,” Smalley said. There are lots of LED light fixtures on the market, and given different outdoor conditions, “It’s easy to find a product not designed for your application or to not apply it properly.”

With the benefit of the consortium’s extensive experience, Kimber’s association struck a deal for LED fixtures for communities throughout Iowa. She figures they got a discount of about 25 percent on fixtures like those used on the streets of Los Angeles.

It’s a strategy that, she said, “you could replicate in any state.”

In fact, “Finding that lump sum all at once” is probably the greatest obstacle to switching to LED streetlights, Smalley said. Many communities have used federal grant funds. Utilities buying the fixtures often can obtain reimbursement from customers because the lights can qualify as capital expenditures.

Smalley said that Washington D.C. managed it by paying a regular monthly fee to a private company that agreed to swap out the old lights for new LEDs.

Giving the problem to a contractor is a model that “works very well,” he said. The contractor came up with the funds at the outset, and pocketed the savings for years afterwards.

In Iowa, they pulled it off using federal Recovery Act money, and a little hard bargaining. And now, Kimber said, in Westfield, at the westernmost point of Iowa, “they’ve changed out all 40 lights and they’re very happy.”

The new streetlights in West Saint Paul, a small Twin Cities suburb, have so far been well-received. Although one disgruntled resident was quoted early on comparing the ambiance of the new whiter lights to a Wal-Mart parking lot, there’s been nary a word of criticism since the last of the 525 LED streetlights was installed early this year, according to Mayor John Zanmiller.

The new fixtures, he said, cast “a very nice soft white” light that creates “a much cleaner look.”

Xcel is testing lights of three different wattages in West Saint Paul, measuring just how much electricity they’re using as well as their brightness. Unlike high-pressure sodium lights, which “burn out” like an incandescent bulb, LEDs reduce light output over many years and can continue to be useful for many years beyond their intended use.

Before Xcel converts streetlights to LED on a large scale, Bieging said, “We want to make sure they’re performing.”

Kimber says the aesthetic improvements are as much a part of the appeal as the cost savings.

“It makes towns look more attractive,” Kimber said. “People will come to the city manager and say, ‘We really like what you’ve done.’

“It’s rare for a city manager ever to get a compliment.”