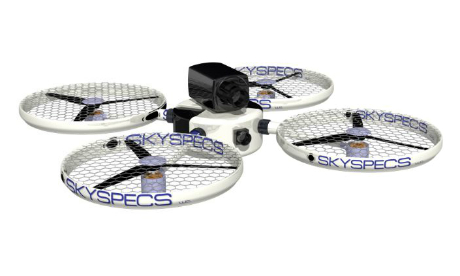 A rendering of a SkySpecs unmanned aircraft, which developers say can help with maintenance of wind turbines and other hard-to-reach places. (Photo via SkySpecs)

While the initial sheen of the clean tech industry may have worn off for investors, that’s not necessarily bad news.

At the Clean Energy Challenge last week in Chicago, experts including venture capitalist Ira Ehrenpreis and U.S. Department of Energy official Dr. David Danielson acknowledged the challenges and dropping investment clean tech has faced in the past year, due in part to the economy and political maneuvering.

But they indicated that while there is less giddiness over the sector, it is moving into a more mature phase that could result in important breakthroughs in batteries and other technology.

The Challenge, hosted by the Clean Energy Trust, offers cash prizes in a number of categories. Participants also work with mentors to develop their technology and business plan. Midwest Energy News was a media sponsor for the event.

Light-maker LuminAID Lab took the $100,000 Early Stage Prize and Bearing Analytics of Purdue University won the $100,000 Student Prize, both sponsored by the U.S. Department of Energy.

SmarterShade, maker of energy efficient film-based window shades, received the $50,000 Lakeside Prize sponsored by the development firm McCaffrey Interests. And SkySpecs, maker of the unmanned aircraft, got the $10,000 Invenergy Renewable Energy Prize. The aerial devices can capture footage above wind turbines, inside sewers or other hard-to-reach places, making monitoring and maintenance easier and less costly.

Nicole Zmij, CEO of Amplified Wind Solutions, won Outstanding Woman Cleantech Entrepreneur, with a $20,000 prize sponsored by ComEd and the Clean Energy Trust. And a special $10,000 judges prize went to Ornicept, an automated bird monitoring system developed in Ann Arbor, Michigan that could be valuable in siting wind turbines.

The Clean Energy Challenge drives home the point that developers and entrepreneurs not only need good technology, they need to be able to convince would-be investors and funders of its relevance and promise.

Teams presented their technology and their market assessments and strategies, then took questions from the audience of clean tech experts and potential investors.

Nicole Zmij of Amplified Wind Solutions envisions combining small wind turbines with wind-tunnel technology to power cell phone towers in remote locations. She was asked how her company’s turbines would compete against the solar installations often used for powering off-grid cell phone towers. An audience member with experience in wind and solar noted that solar is typically considered more reliable.

“Our system addresses that because it can operate in such low wind speeds,” and is paired with a battery, Zmij responded. “In terms of maintenance, there are issues with solar in the field as well, especially in those remote areas where they get covered with dust…We did focus on keeping the design simple to lower any expected maintenance on the project.”

Another audience member asked about scaling up; Zmij explained that their technology is meant to stay small, to power specific applications like cell towers, with possible future uses on farms or in military operations.

He said it costs $300,000 every time a wind turbine gear box needs repairs because of a bearing failure. “If you can predict these bearing failures, that cost goes down to $100,000, because you can have integrated planning” and replace multiple bearings at once, Garg said.

From algae to bikes

The Challenge showcased the wide range of products and services that fall within the realm of clean tech, including supply chains aimed at more cleanly generating, moving and using energy.

Justin Isaacs of the company NanoHarv Technologies, based at Case Western Reserve University, described removing nuisance algae from golf course and farm ponds, then dewatering the algae to create fertilizer or a biomass feedstock. In a technology similar to one long used in the steel industry, nanoparticles would bind to algae as part of a chemical removal process, he said.

“These algae blooms that we’re trying to harvest are a global problem,” said Isaacs, whose team is working with researchers at the Colorado School of Mines on the project. “But we’ve identified two niche markets who not only have a real need for this product, but most importantly are willing to pay — farms and golf courses.”

In the longer run, they hope to use the technology to tackle Lake Erie’s infamously massive, often toxic algae blooms that typically develop in the summer. “And then we’re creating a renewable energy source, and creating jobs,” Isaacs said.

Another company, Waste and Environmental Technologists out of the University of Missouri-Columbia, also proposed removing algae and turning it into biomass for electricity generation, biofuels and fertilizer.

“It turns a waste product into a revenue stream,” with beneficial impacts in terms of energy, air and water, said engineer Gary Cunningham.

Founders of the Indiana early-stage company eCat showed off a hybrid electric pedal-assist bike designed for law enforcement and being used by Chicago, Indianapolis and New York police officers in pilot programs. The bike goes up to 35 mph for up to 30 miles; the idea is that groups of officers can use the bikes to have a more visible presence in high crime neighborhoods or for crowd control — they were used at the 2012 NATO summit in Chicago – while also reducing emissions from squad cars.

The entrants weren’t limited to physical products. For example the St. Louis-based early stage company Material Mix offers an online trading program for recyclable materials, where manufacturers with lots of potentially reusable materials to dispose of can connect with would-be buyers.

Founder Allison Carmen described the current private recycling system as an inefficient one dominated by brokers who don’t necessarily get the best deal for anyone concerned.

“This industry is starving for a place where people can go to trade these goods” directly, she said. She said the average plastics manufacturer spends as much as $39,000 a year getting rid of unwanted refuse that could be reused or recycled to generate an extra profit.

In the event’s morning keynote, Ehrenpreis, of Technology Partners, discussed the state of the clean tech industry as something of a half empty-half full situation. While renewable energy represented 49 percent of all new generation in 2012, investment in clean tech has been falling steeply because of factors including the economy and politics.

“The aftershocks of Solyndra are still reverberating,” he noted.

Solar ETFs (Exchange-traded funds) performed badly in 2012, Ehrenpreis noted, though they have rebounded in 2013. In 2012, he added, global clean tech investment dropped from the previous year, by almost 34 percent.

Ehrenpreis offered quotes from prominent early 20th century pundits calling the automobile a passing fad, a novelty for the rich and an inefficient development that would never replace the horse and buggy. Similarly, clean tech solutions that might not seem viable today could become everyday fixtures in the future, he indicated.

“Evolutions, even revolutions of this magnitude take time,” he said. “It’s easy to say something is too expensive or too hard. We must not allow pessimism to paralyze us.”

Danielson, DOE Assistant Secretary in the Office of Energy Efficiency & Renewable Energy, said it was not surprising that the boom in clean tech venture capital didn’t last forever.

“Real physical energy innovation takes time and it takes money,” he said during the lunch speech. “We all knew that going in, but there’s a real issue now where a venture capital firm is not going to do this on its own. It’s really important for us all to pull together and figure out what this new model will be.”

A closing panel on the future of battery technology featured one such new model: the Joint Center for Energy Storage Research based at Argonne National Laboratory. JCESR leader George Crabtree and other experts described this coming together of academic, industry and government resources as key to developing much more powerful and efficient batteries considered key to widespread adoption of electric vehicles and sweeping modernization of the electric grid.

Now, Crabtree elaborated, “this hub effort is an attempt to break the barriers” and get different sectors talking and working with each other – also one of the goals and apparent accomplishments of the Clean Energy Challenge.