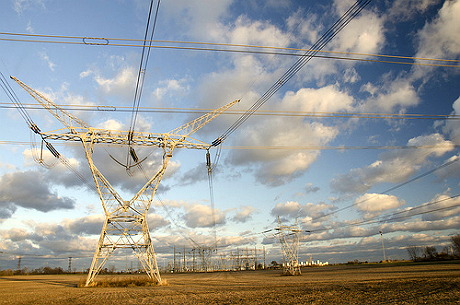 Lighter power lines would require fewer transmission towers, which can make up half the cost of a new line. (Photo by Michael Kappel via Creative Commons)

The steel is heavy and doesn’t conduct electricity well, but it’s needed to support the aluminum, which would otherwise sag too much under the weight of its load.

It’s bulky and unwieldy, but utilities have used the combination since the 1960s, building strong, tightly spaced towers to hold it up off the ground.

Russell, a materials scientists at the U.S. Department of Energy’s Ames Laboratory in Iowa, is part of a team that’s working on a next generation power cable — one that’s lighter, stronger, and more conductive.

The lab is about to begin several months of testing to confirm the strength of their new material, a metal composite made from aluminum and calcium. If they can prove the material has the properties they think it does, the discovery could lead to lower costs for transmission projects.

A ‘eureka’ moment at breakfast

The potential breakthrough came out of two decades of basic research on metals composites — combinations of two or more metals that have unique characteristics.

“We have seen amazingly high strengths from these, and yet they still conduct electricity well,” says Russell. “That’s an odd and rare combination. Usually in metals, the stronger you make it, the worse the conduction of electricity becomes.”

In 2008, Russell and his colleague Iver Anderson began experimenting with a material made of aluminum infused with tiny specks of iron to improve its strength. It showed some promise, but after two years of trial and error they were still unable to form it into wires.

A few years ago, a new idea came to Russell after pouring milk on his cereal one morning: What if they used calcium instead of iron? Calcium is abundant, inexpensive, lightweight, and among the best conductors there is. (Only gold, silver, copper and aluminum are more conductive.)

The researchers combined aluminum with small calcium granules and successfully formed the new material into wires without it cracking or breaking. The wires were highly conductive and relatively strong, but they were limited by the size of calcium particles.

The smaller the particles, the stronger the composite material. The smallest commercially available calcium granules are fairly coarse, about 1.5 millimeters wide. Ideally, Russell and Anderson wanted a calcium metal powder with particles no more than 0.1 millimeter wide.

At that size, though, calcium metal powder becomes hazardous to manufacture. Calcium is reactive with water, and a fine powder can react with humidity in the air, creating the possibility of explosions similar to what can happen in a grain elevator.

The lab has designed a machine for safely creating calcium powder, using a method called centrifugal atomization, which they think could be scaled up to meet demand from power line manufacturers if their aluminum-calcium cables prove to be superior.

The Ames lab power lines conduct AC power as well as the steel-aluminum status quo, but they appear to be at least 10 percent more efficient than existing lines at conducting DC power, according to Russell.

The cables are likely to cost about twice as much as steel and aluminum lines, but Russell thinks power companies will be able to more than make up that premium through lower tower costs. The aluminum-calcium lines weight less, so they’ll require fewer and smaller towers to support them.

“I can make my towers more widely spaced and have fewer towers per mile, which is a massive cost savings,” says Russell. “Half the the cost of the whole line is those towers.”

The material’s strength could make the lines more resilient in extreme weather, too.

Now that they have a supply of calcium powder, the Ames Lab will spend the next several months testing the strength of its aluminum-calcium cables. After that will come a battery of other tests to determine about 20 other properties.

Russell says he was one the phone last week with someone from a major cable manufacturer that’s interested in their work and interesting in helping to fund it. If everything goes well, the cables could be on the market as soon as 2018.