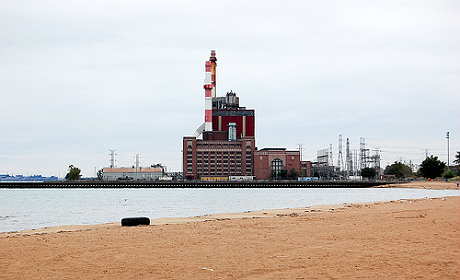 A recent Environmental Protection Agency settlement seals the fate of a Chicago-area coal plant that’s already been shut down for more than a year, but residents will see additional benefits from other provisions.

The consent decree announced by the EPA April 1 mandates that Dominion Energy “permanently retire” the State Line power plant on the Illinois-Indiana border and install pollution controls on another coal-fired plant in Kincaid, central Illinois.

However, State Line has actually been closed since March 2012, because of competition from cheap natural gas and the impending cost of pollution controls required to meet new federal environmental regulations. There was never any indication it would reopen, and last summer it was sold to a Texas company that specializes in demolishing power plants.

But residents of northwest Indiana and the Chicago area should theoretically still see some improvement in local air quality, thanks to mitigation requirements in the consent decree that mandate Dominion fund investments to reduce diesel emissions from rail yards, trucks and buses in the Chicago area.

While the multiple rail yards on the south side of Chicago and in northwest Indiana are not as well-known or visible an environmental and health threat as the coal plant or other sources in the heavily industrial area, diesel pollution from rail yards and vehicles is considered a serious health risk especially for residents in the immediate area.

In Chicago as in many cases nationally, people living around rail yards or major highways are disproportionately low-income, African American and Latino. Meanwhile diesel city buses cause pollution that often impacts people across the socioeconomic spectrum, including those riding in the bus.

The EPA says those measures combined with the retirement of the State Line plant will mean a reduction of 22,000 tons of nitrogen oxide emissions and 49,000 tons of sulfur dioxide annually. Dominion must also pay $3.4 million in civil penalties. The penalties result from a 2009 notice of violation of the Clean Air Act.

A 30-day public comment period on the settlement opened April 1, and it must still be finalized by a judge before taking effect. This was the 26th settlement under a Department of Justice and EPA initiative aimed at enforcing the Clean Air Act’s New Source review provision for power plants.

In winter, the locomotives that move cars around in rail yards often idle for many hours at a time – because they can’t be turned off in cold temperatures without risking engine damage.

Such idling causes significant diesel emissions, especially since the locomotives that stay in rail yards working as “switchers” tend to be the oldest and dirtiest in a company’s fleet, often retired from cross-country service.

As detailed in the consent decree, Dominion’s money will go to retrofit 12 Norfolk Southern switcher locomotives with equipment that allows them to be heated without idling. The funds will also go to install batteries and infrastructure necessary to hook the locomotives  up for “layover heating.” Theoretically the infrastructure investment would make it easier for the railroad to retrofit additional locomotives.

The decree also mandates Dominion spend half a million dollars each in both Indiana and Illinois reducing emissions from diesel-powered trucks and buses. The money could be transferred to state-run grant programs aimed at replacing or retrofitting diesel-burning trucks and buses with propane or natural gas-power – which results in much lower particulate emissions.

Save the Dunes land and advocacy specialist Nathan Pavlovic said that there have been no formal plans regarding whether the funds will be disbursed through Save the Dunes or another organization, but group leaders see it as a significant opportunity for needed conservation and additional land acquisition.

He noted that the dunes have long co-existed with heavy industry, and “this is an opportunity to really further that balance of different land uses.”

Save the Dunes executive director Nicole Barker added: “We are encouraged by the news of this settlement, as emissions from the plant have long been a concern for our organization. The communities adjacent to the facility have felt the impact from this pollution for years, and it is reassuring to have a plan to help mitigate that now finalized. The settlement terms will help offset the pollution to the extent that is possible.”

As a leader of the Southeast Environmental Task Force, Tom Shepherd has long been concerned about diesel emissions from rail yards as well as the emissions from the State Line plant.

He noted that during meetings about the much higher-profile Fisk and Crawford coal-fired plants in Chicago, he would often be the one “standing up and saying, ‘We have another plant right here, it may be in Indiana but it’s still right here.’”

Shepherd said he is glad to hear of the rail yard retrofits – his group has kept tabs on multiple idling locomotives in nearby rail yards, which he considers as a whole “as dirty or dirtier than coal plants.” And he supports restoration in the Indiana Dunes.

But he wishes federal officials had consulted with local groups about the possibility of mitigation in the Lake Calumet area wetlands, also near the State Line plant. Grassroots restoration efforts around Lake Calumet have received national attention, including last summer when the Calumet region was named part of the federal Millennium Reserve conservation initiative.

“Oftentimes when there’s a settlement we find out the mitigation is really benefiting somewhere else,” said Shepherd. “In this case even a little portion of it would do so much for our organization, we’ve been working so hard on these issues with almost nothing. This is not the first time something like this has happened.”

Carolyn Marsh, an environmental activist and avid birder who lives in Whiting, Indiana,  near the State Line plant, says mitigation funds should be spent on projects closer to the plant with shoestring budgets, including a bird sanctuary she helped create nearly adjacent to the plant.

“I’m livid, mad as hell, reading the press release and finding out NPS (National Park Service), Indiana Dunes National Lakeshore area and the US Forest Service are getting a piece of the settlement,” said Marsh. “What about the residents on the Southeast Side of Chicago and in Hammond-Whiting-East Chicago?

“Now we must file comments to challenge the proposed agreement as a contributor to more environmental injustice to this section of the Calumet Region.”