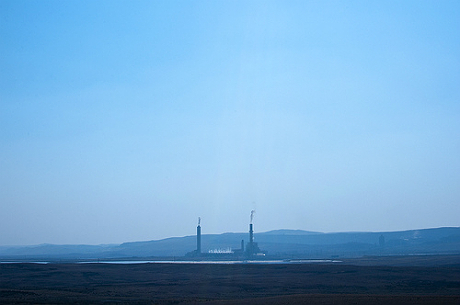 Acting U.S. EPA Administrator Bob Perciasepe said on a call with reporters Wednesday that the agency would collaborate with states to curb greenhouse gases from existing power plants in an effort that would start in fiscal 2014.

On the call to discuss EPA’s new budget proposal, Perciasepe said the agency continues to review comments on its proposed new source performance standard for future power plants. The agency faces a statutory deadline Saturday to finalize the rule, but EPA hasn’t sent it yet to the Office of Management and Budget for review.

When the new power plants rule is finished, Perciasepe said, EPA looks forward to “working with states on existing sources, but we’re not there yet.”

He added, “But that’s certainly something that will be on the table in this next fiscal year.”

Perciasepe’s comment was unusual because White House and EPA have generally shied away from discussing the existing power plant rule.

After the initial publication of this story on Perciasepe’s press briefing, EPA released an emailed statement: “To clarify, EPA currently has no plans to regulate GHG emissions from existing power plants. As the Acting Administrator said today, a variety of potential options are on the table, but the Agency is currently focused on reviewing the more than 2 million comments received on its proposed standards for new power plants. To assert that any decision on any additional action has been made would be incorrect.”

Those who track the issue have long said they expect the agency to eventually promulgate one. Not only is EPA required by law now that it has proposed the future power plants rule, but EPA agreed to do so under a 2010 settlement with environmental litigants. But former EPA Administrator Lisa Jackson and EPA air chief Gina McCarthy, who has been nominated to replace her, spent much of last year repeating that they had “no plans” to regulate existing power plant emissions.

The rule for future power plants is also controversial, as it would limit all facilities to 1,000 pounds per megawatt-hour of carbon dioxide, a level that is easily achievable by natural gas plants but that would require coal plants to eventually phase in carbon capture and storage technology. Coal-fired utilities say CCS is not yet commercially viable, and the rule would effectively ban new coal-fired power generation in the United States.

Industry supporters have speculated that EPA might be late in finalizing the rule because it is rethinking this strategy of a combined standard for two technologies, but environmentalists say that is probably not the case. EPA is more likely trying to cross its t’s and dot its i’s to ensure that the rule stands up to the litigation that will inevitably follow its finalization, they say.

“Just because they might be talking about doing further work to beef up the rationale [for the standard] doesn’t mean that they’re walking away in any sense from the actual proposed standard,” David Doniger of the Natural Resources Defense Council said in a recent interview.

NRDC filed comments arguing that combined cycle natural gas power plants could actually achieve a better greenhouse gas performance than the rule envisions, and Doniger said EPA might be considering crafting a separate, stricter standard for them. Single-cycle peaking units that are only used a limited number of hours a year might not be able to meet the same level that the combined cycle can meet and would face a less stringent standard, he added.

“Too many people are rushing to the assumption that if EPA is in any sense reassessing this proposal, it may be in the direction of weakening it,” he said. “Actually, there’s a number of possibilities for work they could be doing simply to shore up the original proposal. Or even to strengthen it.”

One way of “shoring up” the proposed standard might be to better make the case that coal-fired power plants could meet it, because CCS is in fact developed to the point where utilities can invest in it with confidence, said Conrad Schneider of the Clean Air Task Force.

“We’ve taken the position that it would add strength to the proposal to find that carbon capture and sequestration is an independent basis for best system of emissions reduction,” he said at a recent Clean Air Act briefing on Capitol Hill. The current rule suggests that the standard is achievable because no new coal-fired electric generation is planned in the near future anyway given historically low natural gas prices.