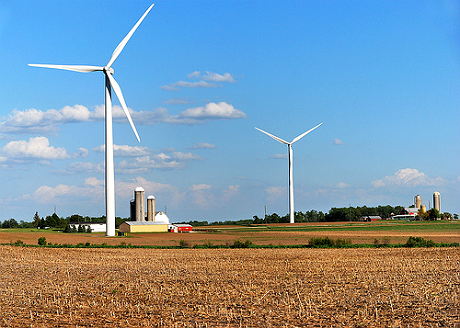 In 2012, a year that saw a nationwide surge in wind farm installations as developers rushed to beat expiring tax credits, Wisconsin added only 18 megawatts of capacity.

By comparison, Michigan and Ohio, with much lower wind potential, had already installed 138 MW and 308 MW in just the first three quarters.

Compared to other Midwestern states, Wisconsin ranks at the bottom in both wind projects under construction and in queue, according to the American Wind Energy Association.

Challenges to wind energy have come from nearly every level of government.

Shortly after taking office in 2011, Gov. Scott Walker proposed a plan supported by the state’s Realtors Association that would upend the new standards. That effort, and other bills to weaken or repeal the new rules, have failed to gain broader support in the state legislature.

New on the state’s legislative docket this spring are a bill that would allow local governments to adopt more stringent restrictions on wind farms than current state law allows, and another that would clear the way for legal action against wind facilities.

Both come from first-term Republican state senator Frank Lasee, whose district includes the area south and east of Green Bay, including Door County and part of the wind-rich Niagara Escarpment. In just a little more than 2 years, Lassee has now produced 7 legislative charges against wind energy.

Wind facility siting in Wisconsin is governed by the state’s Public Service Commission under a 2009 law which emerged from several years of negotiation.

The law told the PSC to craft wind siting guidelines, administrative code now referred to as PSC 128. These uniform guidelines were meant to provide a more predictable business environment for the wind industry, as opposed to an inconsistent patchwork of local rules.

Siting is also informed by the technical expertise of the PSC, which local units of government frequently lack.

Lasee’s SB 71 would allow local officials to impose stricter guidelines than those allowed by the PSC.

“The science is showing these industrial wind turbines are causing harm,” argues Lasee policy adviser Robert Kovach, and current law prevents local officials from enacting ordinances they feel might be necessary to protect the health and safety of their constituents.

From the detailed application procedure through decommissioning requirements, he argues that Wisconsin has the most protective statewide wind permitting standards in the country.

“The primary physical impacts are sound and shadow, and there the standard is very strict,” he says.

The second Lasee bill, planned for introduction later this month, raises the stakes on sound impacts even further.

The bill allows anyone living within 1.5 miles to sue both the landowner and the owner/operator of the turbine for loss of property value, moving costs, medical expenses, pain and suffering, attorney fees, “and any other loss as a result of the industrial wind turbine.” A turbine operator would not be able to argue in their defense that the facility had been properly permitted.

The effort strikes a nerve more broadly with environmental advocates in Wisconsin.

The current Republican majority has made a point of limiting the ability of citizens to sue corporations for damages, beginning with a major tort reform law passed in 2011 and, most recently, in contentious mining legislation.

Lasee supported both bills, and even now has another tort reform bill before the legislature.

However, Lasee’s office resists the comparison. “The mining law does not effect tort law,” insists Kovach. “Any private person who is harmed by a mining operation is still protected and still allowed to file suit for a private nuisance.”

“They just took away all these legal rights for people who live near a mine,” she says.

The mining law limits legal recourse by removing contested case hearings, eliminates a citizen’s right to directly sue the mining company for legal violations, and sets the venue for legal action in the county of the mine, rather than the county downstream where damage is most likely to occur.

Compared to Lasee’s proposal, “it certainly seems like a change of heart for Republicans who tout tort reform,” says Meyer Smith.

The faces of Lasee’s campaign are three homeowners in his district who say they have been driven out by noise from an eight-turbine facility in Shirley, Wisconsin.

While there are numerous anecdotal claims blaming a wide range of health symptoms on wind turbines, multiple scientific studies have so far failed to establish a clear connection, although research is ongoing.

The study, conducted by four independent consulting firms, was inconclusive and called for further research. But its limited findings nevertheless prompted another state lawmaker, Rep. Andre Jacque, to call for a moratorium on wind permits, “to keep this nightmare from spreading.”

A few weeks later, on January 21, the Wisconsin Towns Association adopted a moratorium on wind development, calling for the PSC to “implement standards that address ultra low frequency sound and infrasound from wind turbines.”

The declaration marked a turnaround from the WTA’s initial support of legislation that ultimately led to PSC 128. While their default mode is local control, executive director Rick Stadelman says the towns are open to uniform state standards that work, citing as an example Wisconsin’s large livestock facility rules.

“Our position changed because of a response by members,” he said. “One of our basic responsibilities is to protect health and welfare. At this point we don’t think that the current PSC rules offer that protection.”

The WTA moratorium is strictly advisory, but the town of Sherman, in Sheboygan County, recently took it up, formally asking the PSC for a moratorium as they consider an application for a four-turbine development, citing concerns about potential health impacts.

The PSC appears to be treading lightly around the subject.

On February 14 the Wisconsin Public Service Commission rejected the 41 turbine, 102.5 megawatts Highland project in St. Croix County. The PSC said it needed a “clearer record and a better demonstration that noise from the wind turbines would not exceed Commission standards.”

Under the ruling, the developer may reapply with improved sound modeling and more information. The PSC is also beginning a legislatively mandated review of scientific research collected since PSC 128 was crafted. That report is due to the legislature in October of 2014.

Despite the pushback, support for the current siting laws remains strong. SB 71 received a March 13 hearing, but is otherwise languishing in committee, and appears to lack enough support from Republican colleagues to advance.

The legal recourse bill is currently being shopped for co-sponsors, but Vickerman doubts it will even win a hearing. A recent editorial in the Wisconsin State Journal urged legislators to reject Lasee’s proposal.

Wind on the Wires representative Chris Kunkle says he is dismayed by Lasee’s continued activism. The proposed change to the siting rules would return the system to a very arbitrary framework and “continue to perpetuate uncertainty.” And there is nothing like the legal recourse bill operating anywhere in the country.

“What he’s doing is incredibly detrimental to the industry. It’s fear-mongering,” says Kunkle. “As long as he’s screaming from the rooftops about this it’s going to continue to hamper development in this state.”

RENEW Wisconsin, Clean Wisconsin and Wind on the Wires are members of RE-AMP, which also publishes Midwest Energy News.

Erik Ness has reported about science and the environment for more than 20 years from Madison, Wisconsin. You can reach him at howl@linedried.com