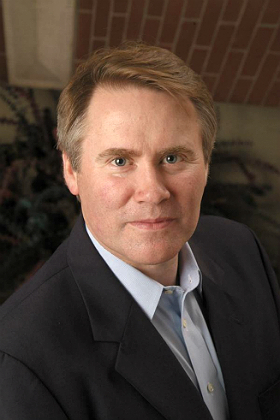 David Wilhelm made his name as a political strategist managing campaigns for President Bill Clinton, Vice President Joe Biden and Chicago Mayor Richard M. Daley, among others. In 1993 he was the youngest ever chair of the Democratic National Committee.

Now Wilhelm has turned his focus to renewable energy investment, particularly in economically distressed areas like his native Ohio. He is a driving force behind Turning Point Solar, a 50 MW solar farm proposed in southeastern Ohio, on the site of a reclaimed strip mine.

Wilhelm’s firm, New Harvest Ventures, initially planned to develop the project with AEP Ohio, but in January Ohio’s Public Utilities Commission denied AEP’s request to pass the cost of the project on to ratepayers, leaving the power company no way to pay for the $130 million project. The Columbus Dispatch declared the project “all but dead” in January.

Now the developers are seeking other buyers for power and renewable energy credits from the solar farm, and Wilhelm said he is still confident it will come to fruition. Wilhelm is a board member of the Environmental Law and Policy Center, and spoke on a panel in Chicago on Wednesday celebrating the organization’s 20th anniversary.

The ELPC is a member of RE-AMP, which also published Midwest Energy News.

Midwest Energy News: How would you describe the potential significance of Turning Point, in terms of its possible impact on the state environmentally and economically or ways it could serve as a model for other projects?

Wilhelm: We are doing everything we can to optimize the job creation benefit to the State of Ohio…and specifically to often overlooked rural parts of the state. We estimate that more than 80 percent of the supply chain for this project will come from Ohio-based businesses. Over 600 jobs will be created directly…and most economists believe that at least another two times that amount are created indirectly through projects like this.

It is also an important environmental story. Not only will Turning Point produce good, clean, local energy, it represents an effective use of reclaimed mine land, of which there is plenty in Appalachian Ohio.

Given the Public Utility Commission’s January decision that means AEP Ohio can’t bill customers to fund Turning Point’s construction, how likely is it that the solar farm will be built?

Well, the last several months have been somewhat of an emotional roller coaster, where the Turning Point team has gone from something like despair in the immediate aftermath of the PUCO decision to cautious optimism today.

The fact is that the PUCO finding, while rejecting the original construct of the deal, praised the many social benefits of the project and pointed us down a pathway where approval would be a given. We call that pathway “Plan B” and we are hard at work on it, speaking with a number of large electricity customers that have interest in adding clean, locally-produced solar to their overall energy portfolio.

Those conversations are ongoing and are happening in real time and the interest of the project would not be served if I went into greater detail at this time. But this project is too good to fail. And we are too dumb to quit. I would not bet against us.

Was it challenging to initially convince AEP Ohio to be involved in Turning Point, and did the retirement of coal plants figure into their involvement? Given the public utility commission’s decision in January, how will AEP’s role change?

AEP has been an absolutely great partner on the Turning Point project at every step along what has been a sometimes bumpy path. They announced very early on during the process that they would be willing to acquire, in some fashion, the entire off-take associated with our project for the next 25 years. You would need to ask them, but I think it’s safe to say that one of the principal drivers for them was a desire to comply with Ohio’s renewable energy portfolio law, which requires that some small part of their overall electricity portfolio come from in-state solar sources.

While AEP’s role in our project will, of necessity, change as a result of the PUCO decision, they have continued to hang in there with us; I guess I am a little uncomfortable stating on their behalf what their continued involvement is likely to be.

Having said that though, they have been great friends of this project every step of the way and continue to be so. They have gone out of their way to arrange meetings with key customers of theirs who might turn out to be offtakers under Plan B. And I am confident that, should the Turning Point project move forward, AEP will be a substantial investor in the project.

Are former strip mines in general a good fit for solar farms? Do you see such arrangements becoming increasingly common?

Well, I am not a solar engineer; I’m just a guy who happened to grow up in Appalachian Ohio. And while I may not know much, I knew this much: I knew that–a generation ago–much of eastern Ohio was strip-mined by the “Big Muskie,” the largest shovel and dragline ever used by humankind. A marching band could be placed in that shovel and once was, there are pictures to prove it.

I also knew that to power the Big Muskie, vast amounts of electricity needed to be brought to some pretty remote stretches of rural Ohio and I suspected that a pretty impressive grid infrastructure was available for our use. Those suspicions turned out to be accurate.

So I don’t know about all strip mines, but in this case we had all the land we could possibly need, we had the necessary grid infrastructure, and we figured, correctly, that there were few environmental issues left connected to that geography. It was a utility-scale solar project waiting to happen.

What kind of job creation impact could a major solar farm like Turning Point have?

For starters, we are not procuring solar panels from abroad; we will be procuring panels made right here in Ohio. And this is where the intentionality part comes in. We knew that we would need to order some 250,000 panels to construct the Turning Point solar array.

It turns out that an order of that size was enough to convince a leading European panel manufacturer, Isofoton of Spain, to site its North American manufacturing facility in Napoleon, Ohio. When fully operational, that facility will employ more than 300 people, more than 60 percent of them veterans.

On the construction side of things, more than 300 job years are linked to a 50 MW project like ours and while they will last only so long as the construction and installation of panels takes place, these are highly desirable and desired jobs. The Marietta local of the IBEW is chomping at the bit, ready to get going. Moreover, we will continue to seek Ohio-based suppliers in every instance.

The Ohio law that provides an exemption from local property taxes for renewable energy projects like ours was absolutely critical for making the project economics work and allowing us to generate electricity at a cost that today is surprisingly competitive, especially when contrasted with other strategies for meeting demand at peak load.

But, I would also say this: we will be making substantial payments in lieu of taxes to Noble County, Ohio, most of which will flow to the schools of that area. I think a meaningful balance has been struck between the legitimate needs of the development and the legitimate needs of the community in which the project is located. There would have been no payments made in the absence of a project. As things stand now, the people, schools and children of Noble County will be winners, too, and that is something we feel good about.

How would you describe the current state of political dialogue around renewables? Might the Republican Party’s current struggles over its identity and message on topics like gay rights spill over into or change its attitude toward renewable energy?

This may be somewhat of a dodge, but I am working overtime to suck partisan politics out of the Turning Point project. My own political preferences are pretty well known, but we have plenty of Republicans on our development team and we have been helped by plenty of Republicans along the way.

When the shovels finally hit the ground, my strong hope is that Republicans, Democrats and Independents will stand alongside environmentalists, former coal miners, labor union representatives and business executives to celebrate the fact that something good has happened in this part of the world.

From an environmentalist’s perspective, the day when renewable energy becomes one of those issues that fall on one side or the other of the political divide, renewable energy will be in trouble. There are plenty of Republicans who support us, perhaps a little more quietly sometimes, but we need them, we appreciate them, and look forward to continue to work with them.