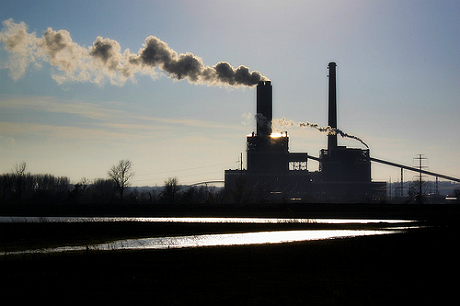 Since opening the a second unit on its Iatan power plant, Kansas City Power & Light has had more energy than it can sell, and has resisted calls for energy efficiency initiatives. (Photo by Vincent Parson via Creative Commons)

This is a tale about two cities, two electric utilities, and two approaches to energy conservation. It’s also about the best place in Missouri to buy compact fluorescent light bulbs.

St. Louis, on the eastern border of Missouri, is powered by Ameren, which earlier this year implemented a new package of benefits and incentives for its customers, aimed at reducing demand for power.

It’s a different story in Kansas City, which hugs the western edge of the state and gets its electricity from Kansas City Power & Light-Missouri. Although the utility started providing some conservation benefits in 2005, it does not offer the range of energy-saving incentives now allowed under state law.

Nor does it currently have any plans to do so. KCP&L already has more energy than it can sell, and unless it closes some power plants, expanding efficiency benefits would only widen the gap between supply and demand.

Thanks to Ameren’s incentives, in St. Louis you can now purchase a compact fluorescent bulb for 75 cents at a participating retailer. The same bulbs cost as much as $2.50 in Kansas City.

And CFL bulbs are just one example of the energy-saving incentives available to Ameren customers, but not to customers of KCP&L across the state. Ameren provides instant rebates for purchases of efficient window air conditioners and water heaters, for example. It also will pay $50 to remove and recycle an old refrigerator or freezer.

Incentives, like those offered by Ameren, he said, “make a huge difference in the adoption of efficiency measures.”

‘We hope at some point they’ll do something’

Missouri lags other states in encouraging energy efficiency. The American Council for an Energy-Efficiency Economy ranked the state 43rd in the nation in 2012, behind most other states in the Midwest.

In 2009, the state legislature passed the Missouri Energy Efficiency Investment Act (MEEIA), with the goal of reducing the demand for electricity by allowing the state’s four investor-owned utilities to recoup from customers the costs of subsidizing energy-efficient products and services.

Regulations were written in 2011, and the first benefits to customers became available early this year in eastern Missouri. Ameren projects that over the next three years, it will spend about $147 million on incentives to St. Louis-area customers.

Another of the state’s four investor-owned utilities – KCP&L-Greater Missouri Operations (GMO), which is owned along with KCP&L-Missouri by Great Plains Energy – will be rolling out a program later this year. It projects spending about $41 million over three years.

KCP&L-Missouri does not plan to offer efficiency benefits under MEEIA. It applied to provide an efficiency program under MEEIA, but then withdrew the application in February 2012 due to flagging sales and “no current need for capacity.”

It continues to offer the suite of benefits it launched several years ago, however. According to a document filed with the state’s utility regulator, it spent about $470,000 in the year ending in June 2011, rewarding customers for making efficiency improvements to their homes.

Since launching its efficiency program in 2005, the utility says it has cut demand by more than 200 megawatts, the result of 50,000 residences and 500 businesses taking advantage of the program.

Asked whether he was displeased with KCP&L-Mo. for lagging behind the state’s other major investor-owned utilities in creating efficiency benefits under MEEIA, Robert Kenney, chairman of the state’s Public Service Commission, hedged.

“I wouldn’t say I’m unhappy. It’s their business decision. But we hope at some point they’ll do something. We’re very happy with what Ameren and GMO have done.”

Asked if the commission would nudge KCP&L to move faster, Kenney said he would wait for results to come in from the experiences of Ameren and GMO “before we would take additional steps.”

Missouri state Sen. Brad Lager, a Republican from northwest Missouri who pushed for the MEEIA legislation, did not hedge.

“If it’s in the consumer’s best interest to have energy efficiency – and I believe it is – I hope the utilities will act accordingly.”

Avoiding the cost of new generation

Three months into its new efficiency incentives, Ameren has found a warm reception, according to Cara Dolly, managing supervisor for the utility’s residential energy efficiency programs.

“Our customers are very excited about it,” she said, noting that about 102,500 subsidized compact fluorescent bulbs have been sold since Jan. 2. More than 300 contractors have been trained in the benefits available to customers investing in certain new heating and air conditioning systems.

Over the next three years, Dolly said, Ameren aims to cut usage by about 800,000 kilowatt hours – or the power typically consumed in one year by 60,000 households. Over the next 20 years, she predicted, the efficiency investments being made now will save Ameren – and by extension its customers – about $500 million.

“Right now, energy efficiency is cost effective. It’s twice as cost-effective as any other measure.”

One of the other measures, of course, would be the construction of a new power plant.

“We want to put that off as long as possible,” Dolly said.

In a recent filing with Missouri’s Public Service Commission, Ameren projected that it might need to find additional capacity by 2021-2025, especially if it should decide to close the 60-year-old Meramec coal-fired plant, which can produce 839 megawatts of power.

KCP&L “is not as pressed for new sources of energy” as Ameren is, observed the Sierra Club’s Alper. In fact, he said, “They have more power than they can sell.”

“We don’t believe it’s right to raise rates for our customers if that capacity is not needed.”

In August of 2010, after years of protracted debate as to whether the utility needed a new power plant, KCP&L started producing power at its new Iatan 2 unit, located about 30 miles northwest of Kansas City. The coal-fired unit can produce 850 megawatts. In May, 2011, residential customer bills increased by about $4.85 a month to pay for the plant.

According to a document filed with the Public Service Commission, KCP&L’s peak demand during 2012 was 3,522 megawatts. The system’s generation capacity was 4,851 megawatts.

The company does not project reducing capacity much over the next couple decades. Plans filed with the state call for closing only one small generator — unit 1 at Montrose, which went into service in 1958 and can produce 188 megawatts.

With greater efficiency, the Sierra Club’s Alper said, KCP&L could reconfigure its system to minimize coal burning – and the pollution, CO2 emissions and health problems to which he said it contributes.

“We think they should sell the oldest and dirtiest plants, and do efficiency. If you have too much power, you should close dangerous plants.”

The utility sees itself as caught between conflicting demands.

“Given our capacity,” spokeswoman McDonald said, “We’re looking at the best way to move forward.”

The Sierra Club and ACEEE are members of RE-AMP, which also publishes Midwest Energy News.