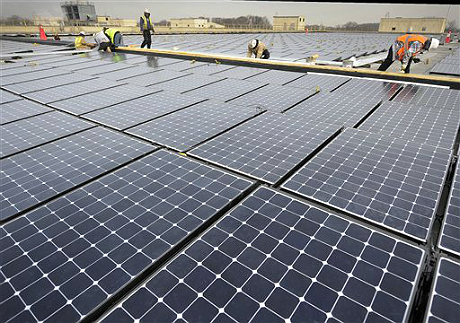 Indianapolis is seeing a boom in solar development, with at least three major solar farms in the works, numerous other significant solar projects proposed and a city initiative to create installations on municipal sites.

A 30 MW solar farm planned for the south side of the city, developed by Minnesota-based Sunrise Energy Ventures LLC, is expected to begin construction this summer and be operating by 2014, as the largest such farm in the Midwest. And the city has a program underway to lease space on the rooftops and grounds of public buildings to solar developers for 10-year contracts, after which point the city might buy the solar panels.

The airport installations are among numerous proposed and in-the-works projects aided by a voluntary feed-in tariff (VFIT) that  Indianapolis Power and Light Company (IPL) launched in March 2010, offering to pay above-market rates to producers of solar energy.

But solar advocates fear the nascent boom could be stalled in its tracks, since the VFIT was a three-year pilot program that expired at the end of March. Clean energy backers are asking IPL to renew the VFIT and also to allow projects on a “waiting list” that were not approved during the program timeline to replace any approved projects that don’t end up happening.

How the program works

Such feed-in tariffs – where the non-utility producers of clean energy are paid above market electricity rates for the power they generate – have been considered crucial to the proliferation of distributed renewable energy generation in Germany and other places.

The policies can benefit utilities by helping them to avoid the cost of building new generating facilities and, in the case of solar, offset peak summer demand.

IPL had committed to offer the VFIT for solar projects equivalent to 1 percent of its customer load, meaning up to 153,000 MW hours or about 100 MW of installed capacity. Participating projects had to get approval from the Indiana Utility Regulatory Commission by the end of March.

IPL spokesperson Brandi Davis-Handy said a total of 30 projects are planned that will add up to “nearly 100 MW.” She said nine of the projects are currently operating, and the 12 MW airport farm – developed by Telamon and Johnson Melloh Solutions — is underway.

“If you add in the  99.1 MW of projects operating or in the near-term pipeline plus another 350 kW of customer-owned wind and solar generation, IPL believes that if all of the projects are constructed as planned, there will be more solar PV capacity in the Indianapolis area than in the rest of the Midwest combined,” Davis-Handy said.

More projects in the pipeline

Some local experts, however, fear it is unlikely that the full 100 MW will be realized, since projects that were approved could fall by the wayside because of finances, zoning problems or other obstacles.

Laura Arnold is president of the Indiana Distributed Energy Alliance, a group that promotes distributed generation and clean energy statewide. Arnold said the group is trying to ascertain the likelihood that each project on the VFIT docket will actually come to fruition.

In early April, the group launched a petition drive on its website calling on IPL to let “waiting list” projects take advantage of the VFIT if others fall through.

“Now we’re trying to talk to all the customers who have a contract to get a sense of their willingness” to proceed, she said. “If they have to drop out, would they be willing to let another project on the list move forward? What we’re trying to do is determine people’s interest and willingness to do that, and then make an appeal to IPL. It’s a very limited way to extend the program.”

A February 26 list from IPL shows 31 projects that would add up to the 153,000 MWh cap of the Rate REP program. The projects were submitted through Sept. 6, 2012. The list also includes more than 40 projects submitted for approval by the utility commission between Sept. 10 and Oct. 1, 2012 that didn’t make it into the Rate REP program since the cap was met.

The projects on this “waiting list” are not identified by name, but they include proposals for installations at the Indianapolis Zoo, a high school and other non-profit institutions. If a project is not part of Rate REP it could still potentially sell electricity from solar panels back to IPL through net metering. But depending on the situation this would be less financially viable or even impossible for some that could have benefited from Rate REP, Arnold explained.

“IPL has issued all these press releases about as a result of this program having the largest amount of solar PV of any utility in the Midwest,” said Arnold. “That’s true if all these projects actually get done. Our question to IPL is, ‘Is there a firm commitment to the community to actually bring online that much solar PV?’”

Davis-Handy said that IPL considers the pilot VFIT program a success, but the utility does not currently have plans to extend or expand it.

“There are no immediate plans to renew the program at this time,” she said. “IPL is focused on working through any issues that may arise with the current set of projects regarding construction, interconnection, power quality impacts and system operating experience with a number of relatively large projects connected to our distribution system.”

She said that projects that did not get utility commission approval by the end of March cannot join the VFIT program.

“At this point, no projects have fallen through,” she added.

The crafting and adoption of the VFIT program was a messy process, with much back and forth about the rates, length of contracts and whether projects had to offset existing customer load.

Ultimately, the program mandated participants had to be IPL customers who would also buy electricity from the utility. Then the utility commission ordered IPL to meet a third of their proposed 100 MW of solar by accepting bids from developers who were not IPL customers, offering to produce solar energy for the lowest possible rate.

Sunrise Energy Ventures won the contracts for that entire amount, with three 10 MW projects which will be paid 8.9, 9.9 and 10.9 cents per kilowatt hour for their electricity for 15-year contracts. About a third of the $56 million construction cost of these projects will be covered by federal tax credits.

Sunrise’s proposal was approved by the utility commission in March, and the project obtained necessary zoning variances on April 2. The solar farm, which will cover almost 300 acres, is right next to residential neighborhoods. It has drawn some vocal opposition from locals concerned about issues including reflectivity and humming noises from the panels, rain drainage and possible impact on property values and future development.

Sunrise managing director Dean Leischow said the company has made various modifications to its plans after discussions with local residents, including increased visual screening of the project.

“If reflectivity was a real issue they would not allow them anywhere near airports, which we all know have embraced solar around the country,” Leischow added.

The future of solar in Indianapolis

Leischow said he thinks both the Indianapolis mayor’s office and IPL have been supportive of solar, and he thinks his company’s project – like the airport solar farm – will be a “keystone” for renewable energy.

“Not only will it be the largest of its kind in Indiana, it is at a cost that is very closely competitive with incremental energy from other sources available, and it is 100 percent clean,” he said.

Arnold said she is encouraged by the fact that Sunrise is willing to develop its project at the relatively low rates it will be paid by IPL.

“We’re very excited this kind of project at those kind of prices is being proposed,” Arnold said. “Anyone, if you give them a high enough price, will build something”; but commitment to a project at low rates can be seen as a vote of confidence in solar power.

Leischow said that while he thinks Indiana officials were on the right track with the VFIT, regulatory and political support needs to continue to keep the momentum going.

“If the state of Indiana is serious in continuing this effort, which we believe it is, then they will need to continue to provide a platform whereby renewable efforts are provided with a similar ability to recoup their investments as firms such as IPL are,” he said, referring to the fact that IPL can recoup costs for its power investments from customers.

Jesse Kharbanda, executive director of the Hoosier Environmental Council, said that both major solar farms could have ripple effects in promoting support for solar power.

“These are fantastic opportunities for the general public to become more aware of the technology,” he said. “It helps dispel the notion that solar can’t be commercial in size in Indiana. Solar is still a relatively new resource; in many people’s minds it’s a modest rooftop installation whereas this is literally a farm.