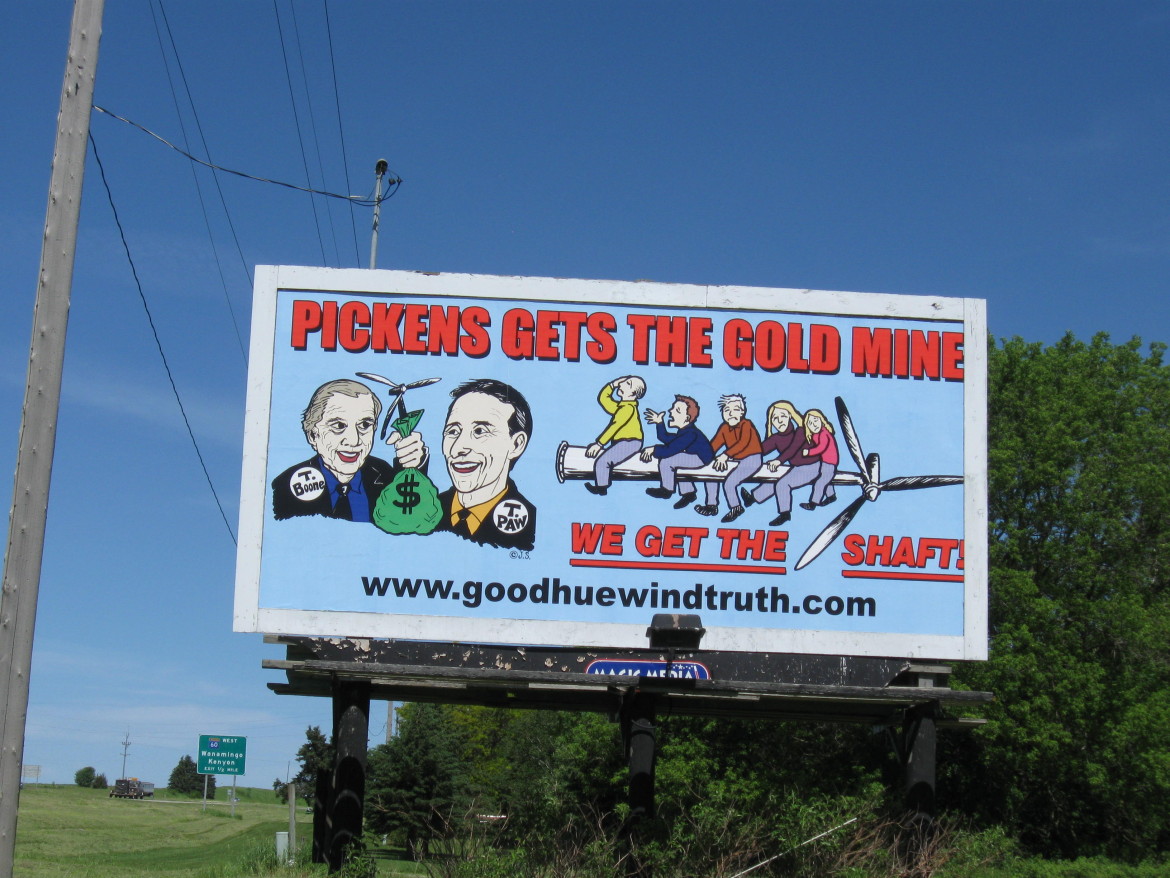 A billboard opposing the Goodhue Wind project in Minnesota. (Photo via Minnesota Watchdog)

A letter from the owner of a proposed southeast Minnesota wind farm to regulators shows his frustration in the permitting process and a willingness to sell off assets of his investment.

“New Era has no confidence that due process for this project will ever end, nor that an ABPP (Avian and Bat Protection Plan) will ever be approved, however comprehensively and carefully drafted,” said Peter Mastic, owner of New Era Wind Farm, in an April 17 letter to the Minnesota Public Utilities Commission.

“A lot of the people that have been fighting this think it’s too good to be true,” said Kristi Rosenquist of the Coalition for Sensible Siting. “They want to see the official death certificate from the Public Utilities Commission before they’ll believe it’s really dead. People have called this the Lazarus Project because every time we thought it was dead in the past, it came back to life.”

The next MPUC meeting on the 50 wind turbine proposal will be May 2. While Mastic has not announced an end to the estimated $180 million wind farm in Goodhue County, he has informed state regulators that he’s pursuing the sale of the project’s power rights to three companies that operate in Minnesota in order to salvage some of his investment.

“Each developer has one or more projects that could receive an assignment of the Goodhue power contracts and be operational in 2013 or 2014,” Mastic wrote. “Each of these projects is sited in a community that is far more receptive to wind energy than is Goodhue.”

Started by billionaire T. Boone Pickens, some $15 million has been spent on the project, which has been stalled for four years during the permitting process.

Long-time opponents seized on the letter to preemptively declare victory in the standoff over their health, safety, wildlife and property rights concerns related to the 78 megawatt power project.

“What his filing says to me is, ‘I’m seeking to get any money I can by selling anything that may be of value to a wind project that is not in Goodhue County’,” said Rosenquist. “I think it’s the end of the line.  That tells me there’s nothing being pursued here locally, nothing.”

Mastic purchased the project in 2012 from the American Wind Alliance amid controversy over the wind farm’s potential impact on eagles and other wildlife, questions over a state program to bolster local renewable energy ownership and a dispute with Xcel Energy over earlier power purchase agreements. Xcel Energy recently gave New Era a deadline of May 12th to resolve the issues.

“As the letter indicated we’ve communicated to them that time is running out,” said Jim Alders of Xcel Energy. “We’ve given them an additional 30 days to address the issues we’ve identified.”

“New Era continues to believe that an assignment of the power contracts to a third-party site would be a reasonable compromise and solution to the difficult circumstances surrounding the project,” Mastic wrote in his recent letter.

Mastic did not respond to calls and email requests for comment.

The resistance to the Goodhue County project has become something of a template for wind power adversaries elsewhere. From the start in 2008, opponents took a page out of the environmental movement’s playbook, challenging the process each step of the way and flooding the MPUC website with many of the nearly 3,000 documents, responses and studies filed online since then.

“The folks opposing the Goodhue project first contacted me in early 2009,” said Lisa Linowes of the Industrial Wind Action Group. “They were very new to the debate about wind energy.  They organized quickly and stayed very focused. They engaged in the public process and, like so many people I work with, made the commitment to see this to the end, win or lose.”

“The strategy is death by a thousand cuts,“ Rosenquist said. “Citizens have done everything they can to shine a light on what’s happening and to challenge the misinformation every step of the way.”

“For many complainants, there will never be enough data, nor any acceptable answer to their complaints,” Mastic wrote in his recent letter. “New Era is frustrated with the complaint process as well. These complaints are not designed to improve the project, they are simply designed to badger New Era and its consultants.”

Behind the scenes, however, some in the renewable energy industry hope the controversy will be resolved soon.

“The Goodhue project is not representative of this industry at all,” one wind industry executive who asked not to be named told Minnesota Watchdog. “There are literally hundreds of operating projects in Minnesota, Iowa and the Dakotas that have no wildlife problems, happy landowners, and are delivering low cost power…Hopefully we won’t have to deal with it much longer.”

There may not be any turbines but there’s already a $1.3 million wind power switching station in the fields to remind everyone of a project Mastic says “has been more thoroughly studied, surveyed and reported on than any other wind project site in the State of Minnesota” — whether they ever throw the switch or not.