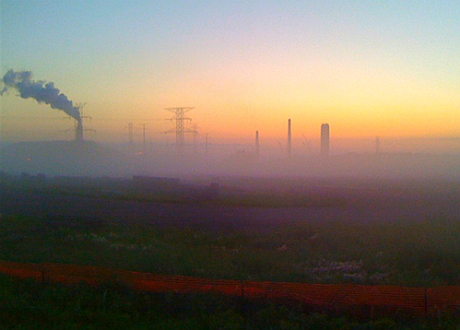 Fog enshrouds the Oak Creek Power Plant in Wisconsin in this 2010 photo. (Photo by jonnyfixedgear via Creative Commons)

A new report warns that Wisconsin’s economic competitiveness could be at risk if the state doesn’t diversify its electricity sources.

The Badger State is already burdened by the second highest electricity prices in the Midwest, with only Michigan customers paying more on average.

Those rates are likely to climb faster than inflation and prices in surrounding states in the next decade due to Wisconsin’s dependance on coal-burning power plants, according to Gary Radloff, director of Midwest policy analysis at the University of Wisconsin-Madison’s Wisconsin Energy Institute.

His recent paper, “How to Keep Wisconsin and the U.S. Competitive in a Changing Energy World,” says better planning and more investment are needed to shield the state’s economy from fossil fuels’ risk and volatility.

“Wisconsin will fall behind in global and domestic economic competitiveness unless it moves towards a balanced energy portfolio with less reliance on high-cost coal and more reliance on clean energy technology solutions,” Radloff writes. “That is not the case today in Wisconsin, and in fact, there are troubling signs Wisconsin has slipped behind other states in the path to long-term energy innovation and economic success.”

Wisconsin may be locked into higher energy prices because of “misguided energy planning in the past” that made long-term commitments to coal plants that are increasingly expensive to operate, Radloff writes.

The report says concerns about electricity supply and reliability in the 1990s and early 2000s led to over-building of coal plants in the state, and customers will be stuck paying for them for the next 20 to 30 years.

They include the We Energies Oak Creek Power Plant, the largest construction project in state history. The $2.2 billion project came in 8 percent over budget. Wisconsin regulators last year approved a rate increase passing most of that overrun on to customers.

Radloff cites a Sierra Club forecast that coal prices will increase about 6 percent per year or 2 percent above inflation over the next decade because of growing transportation, operational, and regulatory expenses.

A need to diversify

The share of Wisconsin’s electricity generated from coal declined to 63 percent in 2010 from 71 percent in 2000. Natural gas increased from 3.8 percent to 8.5 percent during that period, and renewables grew from 1.9 percent to 3.8 percent.

While more coal plants are being converted to natural gas, Radloff cautions that the “silver bullet solution may not be natural gas, despite Wisconsin utilities betting heavily on it.”

Current gas prices are low in part due to over-production, he writes, with drilling companies losing money and likely to retreat if prices don’t go up. And the history of commodity pricing suggests they will at some point.

Most Wisconsin utilities have already fulfilled their benchmarks for the state’s renewable electricity mandate, meaning their “desire to acquire more renewable generation will be minimal to none.”

“The good news is that Wisconsin still probably can right the ship and move in the direction of technology innovation to position itself for economic growth,” Radloff writes.

The report catalogs dozens of policies that appear to have been successful in other states and countries, from research incentives to grid interconnection rules.

“We’re kind of calling this our cookbook. It’s a set of recipes for advancing clean energy technology,” Radloff said in an interview with Midwest Energy News.

The state already has many of the ingredients to become a leader in biogas, microgrids, energy storage and combined heat and power, Radloff said. What’s missing is a comprehensive state energy policy.

“We need to set some energy goals. We just don’t have a strategic energy policy or plan, and we need one. If you don’t set some goals, you don’t get anywhere,” Radloff said.

A wake up call

The report is one of a number of “wake-up calls that Wisconsin is headed in the wrong direction” on energy issues, said Keith Reopelle, senior policy director for Clean Wisconsin.

Clean Wisconsin has been among the groups lobbying to restore an integrated resource planning process that was phased out more than a decade ago as the state prepared to deregulate its utilities, which never happened.

The Wisconsin Public Service Commission collects utility data for biennial Strategic Energy Assessments, but the documents are mostly a snapshot of current trends, not a chance for long-term planning, Reopelle said.

Without a greater policy focus on expanding clean energy in the state, Wisconsin is in danger of missing out on opportunities in one of the few commercial sectors that continues to grow, Reopelle said.

Satya Rhodes-Conway, a senior associate at the Center on Wisconsin Strategy, a nonprofit think tank at the University of Wisconsin-Madison, agrees that Wisconsin lacks a “big picture strategy” on energy.

“It’s both the policy but also the uncertainty about the policy that’s really harming our ability to diversity our energy market,” Rhodes-Conway said.

She said she would emphasize energy efficiency first, because it reduces the amount of generation you need to build, but after that diversification should be a bigger priority than it is today.

The Center on Wisconsin Strategy and Clean Wisconsin are members of RE-AMP, which also publishes Midwest Energy News.

While Radloff’s focus was Wisconsin, the same critique could apply to many other states, and the country as a whole.

“The center of gravity in the clean energy world has shifted from the United States and Europe to China,” Pew Environment said in its latest “Who’s Winning the Clean Energy Race?” report.

“While overall progress has been made in the United States over the last decade in substituting renewable energy for legacy high-carbon energy sources, success will not continue without a favorable policy environment,” Radloff writes in his report.

“Wisconsin, like many states, has taken a cautious approach to renewable energy policy and therefore remains a high-carbon coal and petroleum state… If Wisconsin wants to be a winner in the bioeconomy, then creating policy certainty for renewable energy is required.”